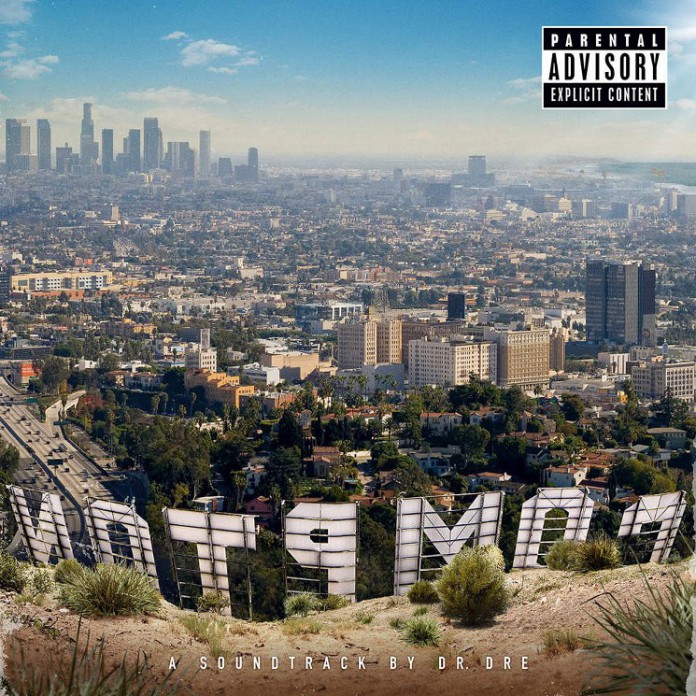 Nearly three weeks ago, Dr. Dre—the famous hip hop artist and producer-turned-business mogul—permanently put 16 years of speculation, disappointment, and yearning to rest by announcing that his long-awaited follow-up to 2001, Detox, had been scrapped indefinitely. However disheartening the news was to fans, Dre offered a ray of hope: he had a new, unheard album—a grand finale to his storied career—finished and ready to be released. Calling the album Compton: The Soundtrack, Dre. brings together a group of strong collaborators and some of his best production since The Chronic to create a send-off fit for an artist of his status.

Compton is a testament to Dre’s unparalleled and unchallenged mastery of delivery and production. Starting the album off with a cinematic introduction to the album, Dre seamlessly jumps to the braggadocian and aggressive “Talk About It,” reminding other rappers that the one true king is back and everyone else better get out of his way. Never throughout the album does Dre’s delivery or production feel lackluster or phoned in. Where others would create overproduced and cacophonous tracks, Dre strikes a harmonious balance between some of his most intricate and ambitious arrangements to date. The juxtaposition of a descending bass line and ascending keys on “Genocide” creates an interesting texture when overlaid on a complex drum and hi-hat pattern.

Unlike prior albums, Compton may be Dre’s most lyrically reflective album to date. Over the course of 60 minutes, Dre provides an intimate examination of his roots, success, and rise to fame. Despite the fact that Dre has “still got Eminem checks [he] ain’t opened yet,” it wasn’t always that way. On the track “It’s All On Me,” Dre opens up about his rough start before success (“It wasn’t always that way, we was recording on the 4-track, homie / New apartment, no fridge, no mattress, no table, no cable”) over a smooth, soulful instrumental. Again on the track “Darkside/Gone,” Dre talks about his drastic shift in lifestyle, going from someone who hung “out down at the swap meet / To driving some of the hottest cars L.A. has ever seen.”

In an interesting departure from Dre’s typically convention, Compton is seemingly devoid of standalone tracks. This is not to say the tracks are bad; they are actually far from it. Compton should be experienced in a single sitting rather than listened to separately as a collection of strong tracks. While we lose out on anthems like “The Next Episode” and “Nuthin’ But A G’ Thang,” Dre has crafted a single, intertwined narrative that expands throughout the album. As it progresses, the album builds off the mood and style of the each previous track, evoking a larger sense of connection and unity.

However strong Dre’s performance and production were, Compton’s strongest and most memorable performances were not his; they were his guests’. Unlike past albums, Dre did not rely substantially on hip-hop’s heavy hitters—Snoop only had two guest verses, while Eminem, Xzibit, and Ice Cube each had one. Instead, Dre used Compton to pass the torch from hip-hop’s Elders: several newcomers took center stage, carrying most of the weight and delivering a surprising punch.

Coming off his own critically acclaimed To Pimp a Butterfly, hip-hop wunderkind and Dre protegee Kendrick Lamar delivered one of the strongest vocal performances on “Deep Water,” touching on his own experiences of growing up as a Compton city native. Four of the album’s recurring featured artists—King Mez, Anderson .Paak, Marsha Ambrosius, and Justus—compliment Dre’s performance with unique vocal styles and performances of their own.

Dre’s lyrical and production style will forever be unparalleled in the genre. Compton proves that even with a 16 year gap, he has one of the strongest visions in the game today. Despite being his final album, we’ll never really forget about Dre.

“Technical Difficulties”: A Review of Extravaganza 2022