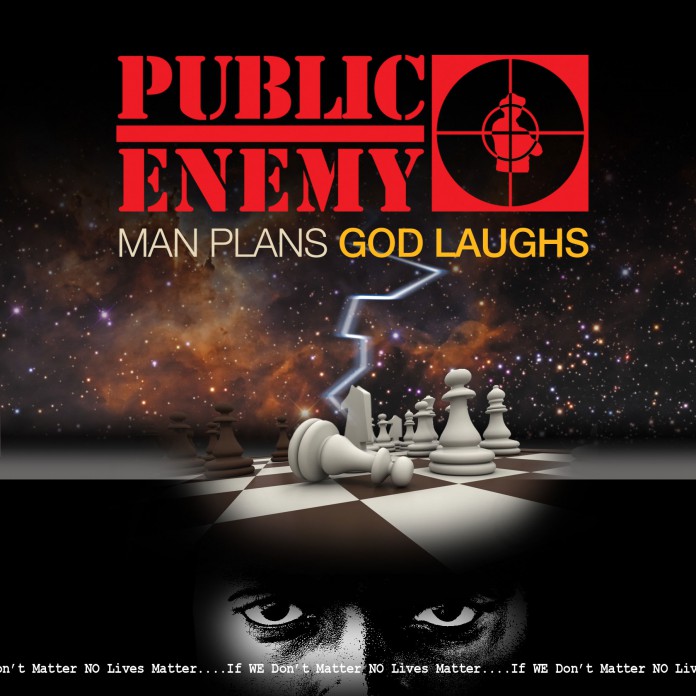 Legendary Long Island hip hop collective and Rock and Roll Hall of Fame inductees Public Enemy are back in action with their newest LP, Man Plans God Laughs, released on July 16. Public Enemy’s classic sound and thematic material still survives after 33 years of existence, a feat of originality few artists can claim. Most of the backbeats are driven forward by funky guitars and tight hip-hop drums, with an aggressive overtone that has shaped Public Enemy’s ultra-rebellious image since the beginnings of rap music. Their lyrics continue to touch on the racial injustices that African-Americans struggle with on a daily basis, continuing their role as a voice for the frustrated and oppressed. Public Enemy are no longer young men; on this album, it is clear they have embraced their role as hip hop elders. Their songs still resonate with purpose and power, mirroring the searing frustrations of black Americans just as succinctly as they did in the late 1980s and early 1990s.

The album kicks off with “No Sympathy From the Devil”, a jab at the unremitting mistreatment of black Americans by every facet of the American legal system, from law enforcement (“There’s been nights where them knights cursed us/Who fills the jail cells right up and first us”) to the federal government (“Government created grown-up ‘80s crack babies/Treat your ass cold ‘till the frostbite bites”), all over a dark, disjointed, glitchy, and funk-infused electronic backbeat created by longtime Public Enemy producer, Gary “G-Wiz” Rinaldo, who produced every song on the album. Public Enemy also takes a shot at the American military, calling them, “the Great Satan, a global terrorist/Didn’t you see the smoke?”, expressing their displeasure at the invasive tactics of U.S. forces abroad.

In “Me to We”, Public Enemy issues a cry for solidarity from the black community to overcome their oppression by combining thousands of individual outcries into one tremendous, irrepressible call for change. When the chorus comes in, the veteran revolutionaries lead a call and response chant of “Can we the people get together?” answered by a resounding “Hell yes!”, followed by an equally emphatic “See the people are they free and equal?/Hell no!”, echoing the push for unity the group has been lauding since the late ‘80s. The call and response vocals, along with the hard-hitting, straight-to-the-point rhyme scheme, echoes the style of old school hip hop tracks from artists like Run-DMC, LL Cool J, and, of course, Public Enemy themselves.

Speaking of echoing themselves, Public Enemy makes gratuitous use of vocal samples from a handful of their classic tracks. In fact, the last track on Man Plans, “Praise the Loud”, comprises entirely of samples from their past songs. Normally, this style of blatant self-referencing would appear unoriginal and egotistical, but considering Public Enemy has been using samples of themselves since 1988, it’s less of a rip-off and more of a stylistic choice. The originality of their self-sampling is paradoxical, but refreshing in its consistency.

Even more consistent in Public Enemy’s extensive back catalogue is their lyrical activism, and every song on Man Plans God Laughs rings with truth and defiance. On “Earthizen”, leading MC Chuck D raps off his ABCs of wisdom and insurrection, and reminds us of the importance of art, to “fill what’s missin’.” On “Give Peace a Damn”, the group speaks on the cycle inner-city violence and the perpetual harm it wreaks on poor neighborhoods. “Corplantationopoly” calls out corporations for putting profit over the well-being of their workers, and acting as spiritual successors of plantation owners in the pre-Civil War south.

Man Plans God Laughs is a fitting continuation of Public Enemy’s legacy as the most rebellious act in hip hop. Public Enemy writes conscious hip hop for consciousness expansion; they are symbols of rebellious assertion and enemies of quiet complacence. The rap game has changed a lot since their heyday, but they have evolved with it, changing from spearheads to elders, and bringing it back from time to time to remind us of the power of speaking out.