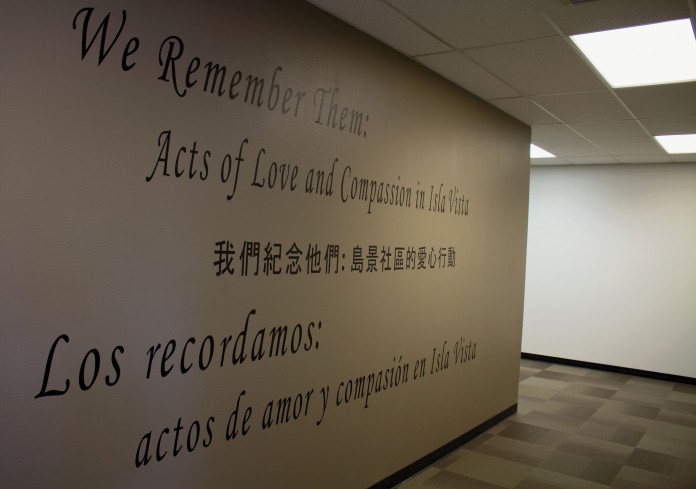 Photos, corkboards, and framed newspapers line the walls of University of California, Santa Barbara’s Red Barn (Old Gym), which is currently home to “We Remember Them: Acts of Love and Compassion in Isla Vista,” an art exhibit commemorating the lives of those lost in the May 23 tragedy of last year, and the reactions of the community throughout the year.

The Red Barn is quiet, filled with a small but steady stream of visitors who follow a suggested path to an interactive space where people are encouraged to fill out cards answering questions such as, “What is your fondest school memory?” and “If you could use one word to describe IV, …” The layout of the rooms follows a chronological structure: in the first room, visitors see a framed article from the Santa Barbara Independent outlining the events that happened on the night of May 23, and are introduced to various self-care and grief resources. In the rooms following, visitors see displays of memorial books full of messages to the victims, personal artifacts, messages from national Greek organizations, and images of the spontaneous memorials that sprung up in front of the residences of those affected by the tragedy.

Other rooms showed the community and national responses, including a message from Chancellor Yang, images of the paddle-out memorial, a video message from Vice President Joe Biden, and the social activism movements that emerged during the months since, including the efforts of Richard Martinez—the father of one of the victims, Christopher Ross Michaels-Martinez—to campaign for stronger gun control laws.

The exhibit has been archived with the UCSB Library, which writes on the exhibit’s webpage, “The bombardment of media upon our community made it difficult for students and the larger community to grieve privately. Many complained that the media was more focused on the violence of the perpetrator than on the lives of the victims. This exhibition is an effort to ‘tell our own stories for ourselves,’ and to help students feel empowered in the process.”

Curator Melissa Barthelemy is a sixth-year Ph.D candidate in history of public policy. As the Memorial Preservation Committee began to brainstorm ideas last June, Barthelemy did not believe that the exhibition would come to fruition for several years. However, more people asked for one to be created, leading Barthelemy and her team to begin planning at the start of winter quarter 2015, and crafting the space this past April.

“When I heard [2014-2015] Associated Students President Ali Guthy say, ‘We Remember Them,’ it was like a call to action for me,” she said. “I was sitting there thinking about how the act of remembrance is just that—an act. It is an action we must partake in through meaningful work.”

Alongside Associate University Librarian for Outreach and Academic Collaboration Rebecca Metzger, Barthelemy approached various academic departments and units at UCSB as well as local businesses in order to fund the exhibit. Some of the personal items up for exhibition were donated by Delta Delta Delta, AS, and other individuals. Seven undergraduate interns, along with countless other volunteers, are currently helping with the exhibition.

“We lost six incredible individuals when James, Katie, George, Veronika, David, and Chris were taken from us far too soon,” said Barthelemy. “Each of them has had a tremendous impact on the lives of those around them, and this exhibit is a testament to the importance of their lives, as well as our own. None of us can bring them back, but we can all work to leave this world a better place than we found it.”

In the guestbook in the final room, visitors left anonymous messages commending the exhibition. “Thank you so much for the time and thought you and your staff have put into this exhibit,” wrote one visitor. “It is amazing and inspires me to continue to support UCSB students to the very best of my ability. #GauchoStrong.”