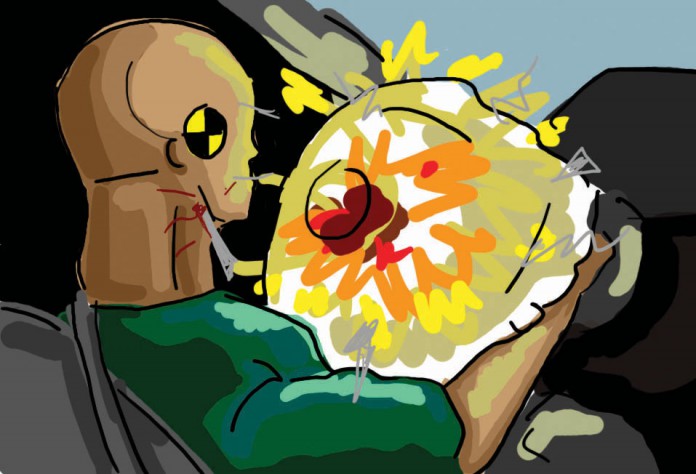 In one of the largest automotive recalls in history, Japanese car parts manufacturer Takata has agreed to recall nearly 34 million defective airbags that have caused six deaths and over 100 injuries over the last several years. While Takata has consistently defended the quality of its airbags, governmental pressure has forced the company to recognize its faulty airbags and cooperate with recalls.

This is not the first time Takata airbags have faced scrutiny over their quality. Over the past several years, automakers have been forced to recall their vehicles due to faulty Takata airbags and customer complaints. Reuters reports that since 2008, companies including Honda, Toyota, Nissan, and Mazda have recalled millions of their vehicles containing Takata airbags. It is only with the most recent recall that Takata itself has taken the initiative to aid in the process and admit that the airbags were defective, due in part to pressure from the National Highway Traffic Safety Administration (NHTSA).

“From the very beginning, our goal has been simple: a safe airbag in every vehicle,” said NHTSA administrator Mark R.  Rosekind. “The steps we’re taking today represent significant progress toward that goal.” Since February, the NHTSA has even been imposing a $14,000 fine per day on Takata for not cooperating with the recall effort, according to Consumer Affairs.

What exactly is at fault with Takata’s airbags? NPR’s Jason Margolis explains that airbags essentially work by using a solid propellant to create a gas to inflate the device. However, Takata’s bags deployed with too much force and ended up spraying shrapnel, from the canister holding the propellant, everywhere, which has been the cause of the associated deaths and injuries.

While an investigation is ongoing, the likely cause has to do with the company’s use of ammonium nitrate, a solid crystalline substance, as the specific propellant for the gas to inflate the airbag. The ammonium nitrate is particularly sensitive to humidity and heat and can degrade over time.  In this case, when the airbag is deployed in a crash, the cannister containing the chemical substance can burn too strongly and explode, spraying shrapnel, according to USA Today.

In an interview with the New York Times, Takata engineers stated that they have been raising concerns over the use of ammonium nitrate in their airbags for over a decade, but without any success. Even when Takata ordered testing on the airbags in 2004 and found evidence that they were defective, they did nothing to correct the problem. The company blamed the oversight over ammonium nitrate on inadequate industrial mandated testing.

“The potential for this long-term phenomenon to occur was not within the scope of the testing specifications prescribed by the vehicle manufacturers,” a Takata supplier said in a statement.

In light of the recall, the most pressing question is the implication for consumers. With 34 million recalls slated, it is not surprising that NHTSA is still trying to coordinate with auto manufacturers to figure out exactly which model cars needed to be recalled. If a consumer’s airbag is being recalled, they should be alerted by their automaker.

Thus far, ten automakers have recalled vehicles, though the estimated amount of time for the recall varies. ABC reported that it could take two and a half years for Takata to produce the replacement inflators. Currently,  they have 3.8 million out of 34 million. Other companies, like Honda, Takata’s largest customer, have lined up additional suppliers to speed up the process.

Rosekind has agreed that this will be a lengthy process but urges consumers to continue driving in the meantime. “Yes, people need to drive their cars,” he said, adding that they should be checking with their dealers to make sure the defective airbags are “replaced as soon as possible.”