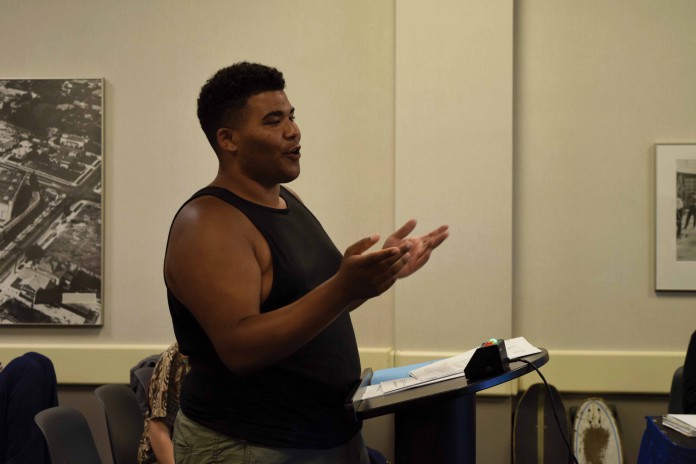 Associated Students Senate allocated $1,000 from Senate Unallocated to fund a mental health awareness event as a memorial for the May 23 tragedy in Isla Vista at the April 29 meeting of AS Senate. However, this allocation resulted in contention from the Chief Financial Officer of Finance and Business Committee Andre Theus, who voiced his concerns shortly after senate made its decision.

Off-campus senator-elect and Internal Health Coordinator for the Office of the Internal Vice President Mika Kawakami and co-president of Active Minds Lilia Goldenberg requested $1,000 from senate to fund their mental health awareness event on May 20. The event will feature a speaker from the Active Minds Speakers’ Bureau, Meg Hutchinson, “a poet and a songwriter who does yoga and meditation and also suffers from bipolar disorder,” according to Goldenberg.

“[Hutchinson] is coming here to discuss her experience [and] how she has used artistic avenues to overcome her mental illness, and basically just bring awareness to mental health and reduce [the] stigma around it,” said Goldenberg.

Additionally, the event will feature an open mic night for students to express their feelings in light of the tragedy. The event will be taking place in Anisq’Oyo’ park.

Letters and Science collegiate senator, Finance and Business Committee Chair, and President-elect Jimmy Villareal stated that, as of the April 29 senate meeting, there were no funds left in OSL and $2,800 left in the Senate Unallocated fund.

During Acceptance of Agenda, senate moved the mental health awareness event funding request to Immediate Consideration, where they discussed the importance of allocating money to fund such an event.

“I think that although we have set a precedent of mostly not funding these kinds of groups, I think that an event such as this is exactly why we have Senate Unallocated,” said Villareal. “It’s not just for any kind of, you know—like no offense, I don’t think we should fund the Persian Student Group that’s just like a normal OSL [group]. But I think that something of this kind of gravity is a special thing that comes up and it’s the type of thing that should come out of Senate Unallocated.”

However, despite a majority belief in the priority of allocating $1,000 from Senate Unallocated toward the mental health awareness event, CFO Theus expressed his concerns with senate later during the meeting, stating that there were other sources of funding and the event did not need to be funded by senate.

“I think, just in the future, if you all are going to be funding groups, I think one, you need to be responsible and rely on whole the structure of how senate works now,” said Theus. “If there are the standing committees, these said standing committees set precedents and that also falls on you because they are a part of the senate… like Jimmy said, it sucks when you cannot fund groups when you know they really need the money, but that’s when you have to make those tough decisions… I think if you all are going to start using the Senate Unallocated money then you all need to start advertising that you are accepting these people to come and get money for their events.”

Theus stated that there may be some student groups that wanted to request money from OSL, but gave up upon receiving word that there were zero dollars left in the OSL fund, and they are unaware that senate may be willing to allocate funds from Senate Unallcoated.

“You thought that was a very important event, which I do too,” said Theus. “But I also thought that Black Culture Week was very important. Turn on the news— look what’s going on with black people in America! Guess what we funded them? Zero dollars, because we can’t, because we set a precedent of not using that Senate Unallocated money. And you have your advisors tell you, ‘Be careful using the Senate Unallocated money because that’s not what the sole purpose is for.’”

Theus also shared that funding the Persian Student Group should not have even been a discussion, because the group had already used their one time exception for funding for food at an event. Senate had decided to table the discussion of funding for the Persian Student Group for one week earlier that evening. Theus stated that if senators had read the minutes—which is their “responsibility”—then they would have been aware of the groups that had and had not already received funding.

“That’s all I’m saying,” said Theus. “So be sure and watch what you’re doing.”