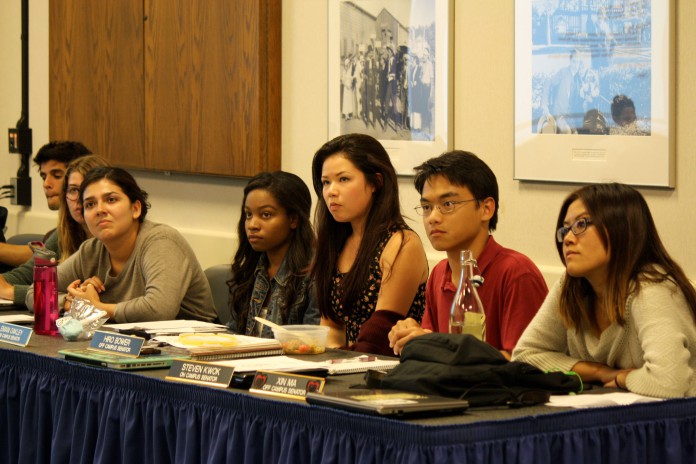 Associated Students Senate discussed and approved their budget for the 2015-2016 fiscal year at their May 6 meeting. While many AS entities were granted the funding recommended by President Ali Guthy, some were funded less than recommended or requested. The remaining $16,794.74 was placed into the Senate Unallocated fund, where it will remain throughout the upcoming academic year as a source from which entities and organizations, as well as registered Office of Student Life groups, may request funding.

In addition to discussing the budget, various bills and resolutions were presented to senate, including A Resolution To Require UCSB Licensees that Sourced Apparel from Bangladesh, Prior to January 1, 2013, be Required to Sign the Bangladesh Accord to University Affairs Committee.

The resolution states that Bangladesh is “the second largest apparel producer in the world” in factories that do not currently meet basic safety standards, and would require UCSB licensees currently sourcing apparel produced in Bangladesh to sign the Bangladesh Accord, legally obligating the said brands to “ensure that sufficient funds are available to assure that their contract factories are brought up to international safety standards.” The resolution, authored by off-campus senator Cassie Mancini and on-campus senator Daisy Fernandez, was sent to University Affairs committee.

A Bill to Uphold the Responsibilities of Senators, authored by on-campus senator Matthew Santos and Mancini, was also presented during New Business.

“Right now the Standing Policies [and Procedures] does not address the conflict of interest for senators when they try to apply for staff member positions within executive offices or leadership positions in any of the boards, commissions, committees, or units,” said Santos. “This [would go] into the senate members’ duties that in order to commit themselves to their school as senators they should limit their participation in the AS entities to either as senate liaisons or as general members.”

Mancini reinforced the importance of the bill and stated that it would be a conflict of interest for senators holding leadership positions in other AS entities to approve their own minutes during senate meetings.

The bill was sent to Constitution and Bylaws committee.