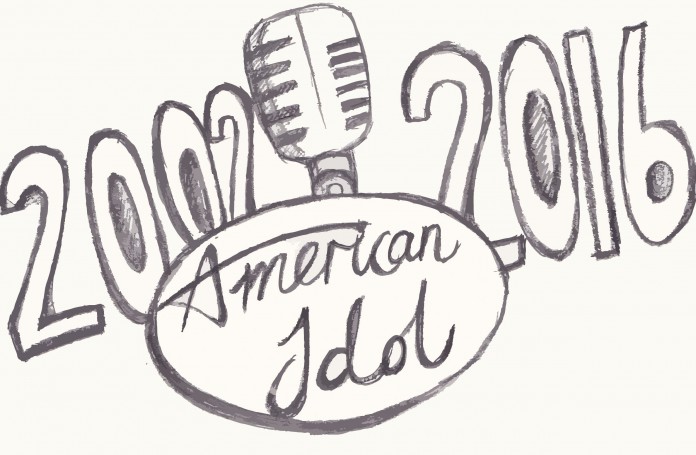 In what is sure to be news to many, the fourteenth season of American Idol concluded last week (apparently, some guy named Nick Fradiani won). But more importantly, alongside the finale came news that the show’s next season, its fifteenth, will be its last. Yes, after an incredible 15-year run, American Idol is finally coming to an end.

American Idol has had a tremendous influence on the music industry and pop culture since its premiere in 2002. Though based on a British show named Pop Idol, American Idol grew a reputation of its own due to its incredible viewership and charismatic talent. It has spawned many industry-shaping singers and stars throughout its run, including Kelly Clarkson, Carrie Underwood, Jennifer Hudson, Katherine McPhee, and Chris Daughtry, along with some who had decidedly much less cultural impact (I’m looking at you, Justin Guarini).

Perhaps the most incredible part about the pop culture phenomenon is how simple the premise has always been: audition singers all across the country, narrow those selections down with a panel of judges, and then have them compete against one another for a record contract. Every week for around 12 weeks, the contestants would sing a song based on a given theme, and every week a contestant would be voted off of the show by the viewing public.

It was this audience involvement and participation that really made American Idol stand out. Viewers could vote, either via calling or texting, on who they wanted to see go through to the next round, which determined who would stay and who would go. This new version of television democracy gave viewers a sense of investment in certain contestants, which kept the audience watching week after week. Rudimentary as it seems nowadays, no other show had that kind of audience involvement and structure when Idol premiered in 2002.

In fact, the American Idol structure is one that has been enormously influential for reality television. It established the basic modern talent show structure that has been copied time and time again by shows like Dancing with the Stars, So You Think You Can Dance, and America’s Got Talent.

Of course, a major part of the appeal of these reality competition shows is the personality and chemisty of the judges. The original three American Idol judges (Randy Jackson, Paula Abdul, and the infamous Simon Cowell) had distinct and colorful personalities, and they generally always had productive criticism for the contestants, even if Paula’s was often overshadowed by her mysteriously slurred speech. Simon Cowell was especially notorious for his bluntly critical responses to many of the contestants, and introduced the television world to the snarky British judge stereotype that has now been copied so many times. Many talent shows since have tried to emulate the appeal of the judges, though none have really come close to the impact of the original three American Idol judges.

It was really when the judges started leaving that American Idol started going downhill, both in relevance and in ratings. By season 10, two of the three original judges had disappeared, and their replacements simply didn’t hold viewers’ attention nearly as well.

On top of that, newer, hipper singing competition shows began to fill the TV schedule, and began to cut in to Idol‘s market share, eventually overtaking their spiritual predecessor. Shows like The X Factor and The Voice came out and addressed some of the issues people had with American Idol, including the personalities of the contestants oftentimes overshadowing their actual singing abilities.

There is no denying American Idol’s tremendous impact, not just on the music industry, but on the television industry as well. It made the Fox network a ton of money, and the talent it spawned is unmistakable. Although the show may be reaching its end, its impact will be felt for a long time to come.