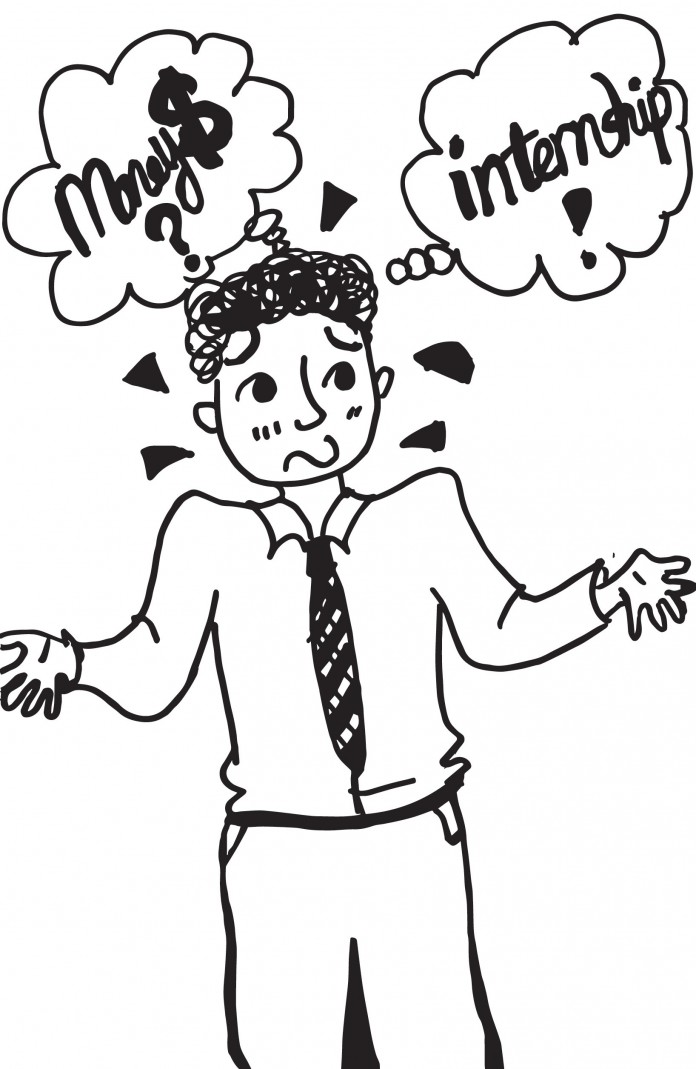 These days, internships seem to be the new unsaid rite of passage for the average college student. However, the morality of the underpaid internship is a crucial point of contention. Although all internships are voluntary, employers often exploit college students’ desperation to gain work experience. This often results in an alarming disparity of income between regular employees and low-paid or unpaid interns, even if the workloads are roughly equivalent.

Of course, there are many reasons why an employer would or wouldn’t want to pay their interns. Those interns who simply “shadow” or observe tend not to get paid because they do not directly benefit companies as regular employees do. According to The Economist, companies argue that the work of job-shadowing interns contributes primarily to the intern’s own learning rather than a company’s gain. While this seems a fair assessment, there are other interns who do the same work as employees and yet are compensated less than minimum wage. According to Forbes, the fashion, journalism, and media industries are infamous for not properly paying their interns. Though this is due to industry hypercompetition, undercompensation makes employers susceptible to suits for back pay to interns who complete substantial work in the service of their companies’ bottom line. These interns sue because they were given unpaid duties mirroring that of paid workers.

The underlying attitude of all this is the decreasing value that many employers are placing on interns. Many interns will agree that the work they do is more than just an educational experience, and from a college student’s perspective, internships warrant proper compensation for a variety of reasons. Firstly, interns are not doing volunteer work; much of internship work yields clear benefits for a company. On top of that, The Atlantic reported that the hiring rate for those who complete unpaid internships is roughly equivalent to that of people with no internship experience at all (respectively, 37 percent and 35 percent). Paid interns are much more attractive candidates to employers, with a hiring rate of 63 percent, because, theoretically at least, the paid intern performs more substantive administrative tasks than the more clerical labor of the unpaid intern. Though this is not strictly true, evidently employers reward applicants based on the nature of their internships.

So basically, it pays to get paid. College students go through the same process to apply for internships that they would with regular jobs, so shouldn’t we get paid the same as regular workers? Yet opponents argue that unpaid internships have become such a default part of higher education that they do not necessitate an income. However, even though college students know that some internships will underpay, the allure of resume-worthy experience ultimately persuades us to apply anyway. The pressure of competition from our peers—our future rivals in the job market—tends to override our sense of income injustice. The low-paying or unpaid internship, then, is a doubtful enterprise because it gives us experience in the workplace but is less likely to be rewarded with a job offer upon completion. Moreover, even if we are lucky enough to get hired full-time, according to Forbes, the average salaries of former unpaid interns compared to former paid interns is shocking: $37,000 to $52,000 per year.

With this knowledge of how employers value unpaid versus paid internships, inevitably the question of the real worth of unpaid internships arises. Unpaid internships are fine as long as the extent of our duties reflect our lack of pay (i.e. job shadowing). But whether paid or unpaid, employers need to respect all their interns, starting by compensating those they unjustly underpay for doing the work of regular, paid employees. However, in order to maximize post-graduation employment opportunities, it might be wise to consider focusing our energies on landing more paid internships. But paid or unpaid, all internship experiences are valuable, and employers would do well to respect them during hiring seasons.