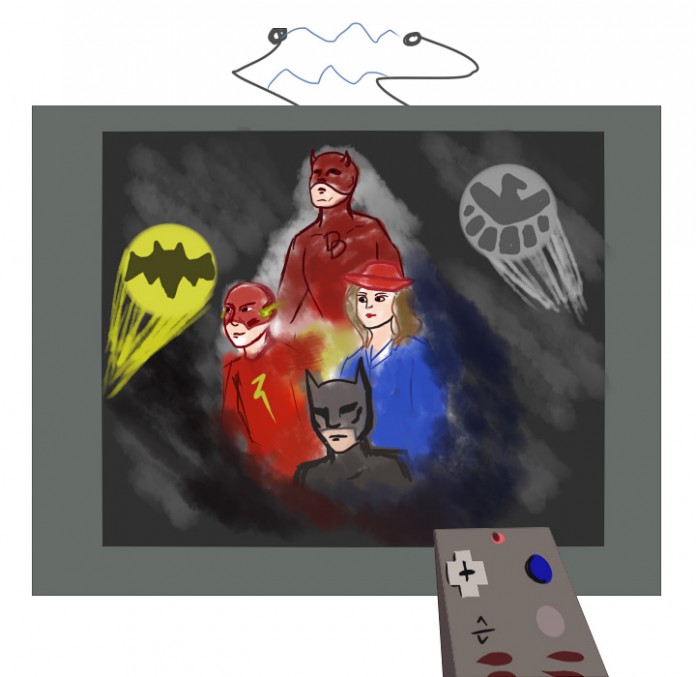 It’s no secret that comic book culture has slowly risen its way to power in modern media. Between the powerhouse production of superhero movies and the publication of monthly comic serials, hundreds of stories have been told about the most classic characters. Recently, with both the publishing and film industries being dominated by Marvel Comics and DC Comics, creators have been searching for new, novel ways to chronicle comic book adventures for new audiences—cue the episodic television series.

There are now dozens of comics being adapted for the small screen and the computer screen between network and Netflix projects. But how do they all stack up? Should heroes stick to the silver screen, or is television shaping up to be the newest revolutionary platform for telling these epic stories?

What Works: This 13-episode series went straight to Netflix as the first in Marvel’s “Defenders” grouping, and it was an instant success. Soon to follow in the wildly successful footsteps of Matt Murdock are heroes Jessica Jones and Luke Cage, whose shows are currently in development. Daredevil showed Marvel’s first real “street-level” hero on a much smaller, much grittier scale than the silver screen Avengers. It paces well and packs exciting punches, balancing legal drama and vigilante action with true Marvel finesse, though the show sets itself apart from their regular hero faire.

What Doesn’t Work: One noted issue with the new series was that, though it featured a blind protagonist, the Netflix format was not blind-inclusive. However, within four days of this issue being noted and vocalized by fans, Netflix resolved to provide audio commentary for it, making the series more accessible to disabled fans. So, all in all, Daredevil is currently the strongest work in the genre of comic book television shows. Kudos, Marvel. And, kudos, Netflix

DC’s Arrow and The Flash (The CW)

What Works: Both of these shows are very faithful to their source material, and these series work well within the same universe. The Flash keeps the atmosphere light, chronicling the adventures of Barry Allen, the fastest man alive. The levity of the series makes it fun for veteran fans of the genre, and keeps the proceedings inviting to newcomers. Arrow draws well on the action of Oliver Queen’s comic stories, a little bit more battle-oriented than the Flash show. Both series have supplementary comics based on the shows; so, a comic based on a show based on a comic.

What Doesn’t Work: Between the two shows, there have been a lot of characters and secondary storylines introduced. The showrunners have worked to move through the plots and subplots, but inconsistent episode releases due to hiatuses have caused the shows to progress irregularly.

What Works: Taking the opportunity to bring the agency to television has proved a strong choice for Marvel, deepening the mythos of their film world. Agents of S.H.I.E.L.D. has been the testing ground for a lot of characters and plot structures that would otherwise not get much focus in the films. Agent Carter took a fan favorite first seen in Captain America: The First Avenger and showed us the origins of the S.H.I.E.L.D. agency, giving a rich history to one of the most prominent women in the Marvel cinematic universe, or MCU. These shows have served to more fully encapsulate the scope of the MCU, and give it fine inner workings that wouldn’t be explored otherwise.

What Doesn’t Work: Agents of SH.I.E.L.D. suffered from strange, almost confused plot lines for a good deal of its first season. It found its stride in the second season, though, with the introduction of the Inhumans, which will come to the MCU in 2019. Agent Carter‘s first season was a limited 8-episode run, and so was tasked with fitting a lot of story in a short time. Many people resolved to wait until the show went on Netflix, and didn’t watch it while it was originally airing. This caused ratings to suffer, and the show is now in jeopardy of not getting a second season.

What Works: Gotham sets out to introduce viewers to the unseen past of the famous Gotham City, before Bruce Wayne became the masked vigilante Batman. It gives background to many of the most classic villains whose pasts remained largely explored before the show. It also introduces original characters, like the powerful Maria “Fish” Mooney, adding an interesting new dynamic to the fascinating cast of Gothamites.

What Doesn’t Work: Despite the intrigue of the villains and other characters, the story seems to drag. There is a bit of a lack of coherence in all of the elements of Gotham City without the presence of Batman. This is a problem, of course, as Bruce Wayne is only a child in this series. The concept is novel, but Gotham doesn’t always deliver on what it promises.

With comics that have epic legacies, like many of the Marvel and DC titles, writers must pick and choose characters and stories that make the most sense and are best to adapt. There are always challenges in adapting comic books to television. No show can truly and accurately recreate its source material, but as more and more books are adapted to television, it’s safe to say viewers will have all sorts of stories and genres to choose from in the coming future.