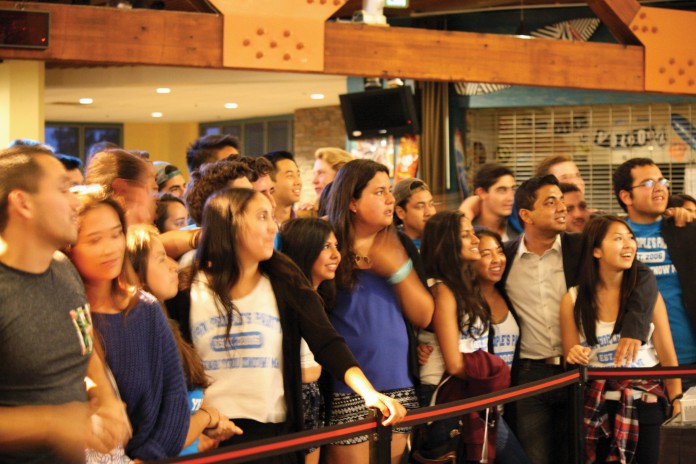 The Open People’s Party nearly swept the 2015 Associated Students Elections, capturing the majority of votes cast by 5,121 undergraduate students from April 20-23 on GOLD, at the University of California, Santa Barbara.

Villarreal ran against Jason Garshfield from the Free Thinking Patriots and Ernesto Pina, who ran Independent for the presidency, winning 2,913 or 69.44 percent of the votes. The two-year AS veteran plans to follow up on his campaign talking points, tackling expected challenges coming from the UC Regents.

“They have continually seemed disassociated and out of touch with the needs of the students they are supposedly serving,” said Villarreal. “The first thing I’m going to do is create strong bonds with my EVPSA, Mohsin Mirza, and the rest of the Council of Presidents to create a unified front that the Regents cannot ignore. It’s only through cooperation across the state that we can make any headway when it comes to stopping tuition hikes within the UC.”

EVPSA-elect Mirza had similar thoughts on the work necessary to challenge the Regents while campaigning. “Students at UCSB and every other UC campus are immensely frustrated about the enormous cost of our education,” said Mirza. “The campaign was about appealing to this frustration while letting our students know we don’t have to simply accept this, and that we can still fight for affordability.”

Voting did not go without difficulty for the students casting ballots. A small number of students experienced technical difficulties with the receipts received. Some cast votes for a certain candidate and received a receipt stating that they voted for another; for example, a student may have voted for Garshfield, but received a receipt stating that they had voted for Villareal. Students who wrote in independent candidates saw blank spots where they had written in names, leading to concerns that votes were not properly counted.

AS Elections Committee chair Fiona Hayman confirmed that the votes were tabulated as cast, and that the receipt is an experimental feature implemented this year. Results announcements were changed to early evening April 24 due to anticipated issues with vote tabulation, but changed back to April 23 as IT operations devised a system to count write-in votes electronically. IT did not respond to requests for comment on the receipt hiccup.

The 2015 AS elections have been tinged with some student unrest about OPP being the “main” political party. Posts on social media showed concern for the state of student politics, ridiculing the exposure of OPP in comparison to other candidates. “OPP [sic] is anyone running against you? It’s like you guys are liking your own facebook status,” wrote one anonymous user on UCSB Confessions.

Hayman commented on the nature of student voting in relation to what seems like a single party.

“I think the fact that the majority of the candidates are affiliated with one party may have led to students’ perception that they lack meaningful choice between candidates—given that many of the senatorial candidates are unopposed,” said Hayman. “I also think the dominance of one party may have led to the emergence of an unusually high number of write-in candidates fairly late in the elections process, to partially fill the void of competition against the dominant party.”

Additionally, OPP almost swept senate elections, save for the election of independent candidate Jacob Johnson as an Off-Campus senator and FTP’s Brendan Korbas as an On-Campus senator*. All fees up for reaffirmation were reaffirmed, while students voted in favor of fee increases for AS Bike Committee and AS presence in IV, and against the Daily Nexus.

“Honestly, it hasn’t hit me really that I’m on Senate,” said Lacy Wright, an On-Campus senator elect. “Running virtually unopposed, I feel like I don’t deserve it because I didn’t have to work for it. So I feel like I need to work harder now to prove that I’m really here to represent students and show that I care.”

*Because Korbas will be living in university owned off-campus housing during the 2015-2016 academic year, he is no longer eligible for the position of on-campus senator.