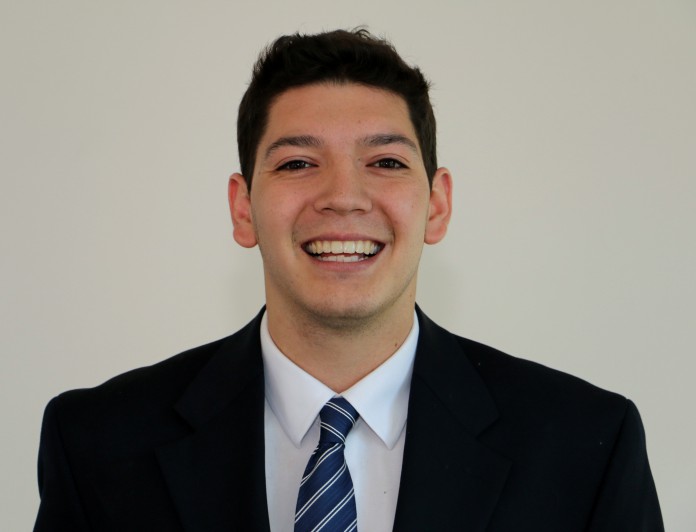 I’ve been off-campus senator last year, and then Letters and Science senator this year. Worked on Finance Board last year—now it’s Finance and Business Committee, same deal—IVTU (Isla Vista Tenants Union). […] Basically working in AS I have seen how amazing a vehicle it is for student interests. Obviously we are all here for an education—that’s what the university provides—but there are a lot of gaps within the school and we don’t get all these other things, and so that’s what AS is for. AS is for student health, it’s for a bike shop, it’s for a food bank, you know, things that fill in the gaps for what is missing, for what the university doesn’t provide. I see it as a really amazing vehicle for that, and a way to amplify the student voice. Many of us are young men and women living on our own for the first time, making a lot of our own decisions for the first time. It’s a way for us to influence what our university experience looks like. I think that I have the experience and the vision necessary to keep this vehicle moving in an upward trajectory and doing what the students want.

I do 100 percent agree with you that apathy is still an issue, or definitely an issue. I think that for associated students, the outreach, the recruitment, and retention are hugely, hugely important. How are we going to make people who aren’t interested in AS care about what’s going on here? By being useful to them. We have so many resources, so many services that we provide, and all the time students don’t know about it.

The Chief Financial Officer and the Chief Marketing Officer are the two positions [within ASOP] that I am most excited about, so I want to do targeted recruitment for those people…This is a $10.8 million association overall—this is a huge deal! It’s a great experience to be the CFO of that—come out, apply! The very first thing I want to do is get the best people in the job…I want to do outreach to more students to let them know that these are the kind of resources available that they don’t know about.

There’s a few things I can do as president for that. Number one is collaboration and communication with the EVPSA’s office. One thing that I was kind of disappointed before starting the whole election’s season–obviously, you have to meet with your respective positions, so I met with Ali—but when I was asking her different things as president, I was really surprised when I found out that she didn’t work very closely with the Council of Presidents, which is the president of every single UC. [They always meet] at least once a quarter, but this year just up to now I think they have met four or five times just with Janet Napolitano. And so I was really taken aback by [the fact that she] doesn’t actually work very closely with everyone else who is the sole representative of each UC. If we don’t all get on the same page, then how can we expect anyone else to get on the same page? So that’s a big thing that I want to change. After that, if we can all agree on things and if we can start bringing those things to the UC Student Association and the US Student Association. Because we are all coming from different angles and trying to attack it, at the one big meeting when we get with Napolitano, we’re not going to get anything done. We have to come unified.

This year, I served as the chair of Finance and Business Committee, so I already have a lot of experience helping student organizations get funding and get through the whole Associated Students process. We have over four hundred registered OSL groups on campus, and for a lot of them getting funding from the Finance and Business Committee is their only contact with AS. It’s not always so easy; they are confused, there is a lack of communication. We are working through the Creative Media Unit that we just created last year, and one of those things is creating a lot of videos, and that’s going to help overall make AS function better…Just as far as representation goes, my door is going to be open. I am always available for them, any group, I am happy to listen to them. That’s my job, to amplify their voices on all levels—at the university level, talking to Chancellor Yang, all the way up to the statewide level, talking to Janet Napolitano. Another big thing about […]OSL groups is everyone who has been registered all of last year and this year can apply for a startup fund that is $250…so you can do whatever it is that your organization wants to do, we want it to be thriving. So one of the things that I wanted to implement this year—the reason I had this idea was for safety, but it will be good for student groups in general—is that every student group that has their entire organization go through bystander intervention training, which we will be making available to all student groups…then rather than $250 they can get up to $300 for their startup fee. So a little extra money, a little incentive…because safety is a huge thing. As Associated Students, I kind of think of my job on two ends. There’s the advocacy side, and then there’s the [fact that], you know, I’m the chief executive officer of a multimillion dollar organization. As far as advocacy goes, like I said, I can’t personally lower tuition. That has to do with the state legislature, that has to do with the Regents, all this stuff. I can be an advocate and make them see the student side and where we’re coming from…I can’t change the level of policing, but I can advocate for that.

We actually […] pay the highest student fees for our student government out of any of the UCs. I don’t think we should be paying more, first of all, but…we provide so many services, and I am proud of that. We have so many things that students want to see and that we get done for them. But like I said, I don’t think that we should be paying more, because there are a lot of student organizations that are getting this funding that aren’t necessarily using all of it. So I think that they should have some reserves, maybe, but not so much…one of the first things we are going to do, after I recruit a CFO, is we are going to be creating at least a [report of] the last three years [for] every single board, commission, and unit, that says how much money they are getting every year and [how much] they are actually spending every year…We are going to make that report, first of all, see how much they have been spending, and we are going to bring that report to each board, commission, and unit and say, “We’ve looked back on the past few years. Here are the trends, here’s what you’re spending. How can we maximize the dollars that you’re getting? What can we do that every single dollar that the students that are here on this campus are paying in is actually getting out to all the students?” Because if you’re sitting on reserves, that means that the students who are paying it aren’t getting those services, or they aren’t exactly using all the money that they are paying in…Hopefully it doesn’t come to this and hopefully we can figure out plans to maximize every single dollar that students are paying in, but…[we can perform] a student fee adjustment measure…I think giving students a little bit more information on the ballot about what students are actually getting. For example, do you want to keep paying $2.10 [for an organization’s services], or do you want to get the same services for $1.85?