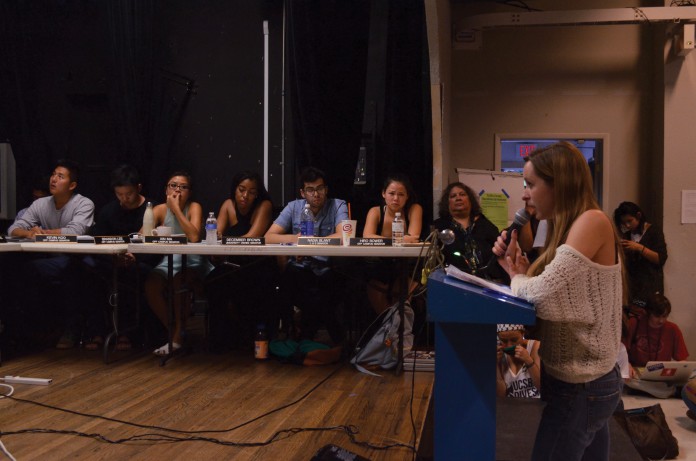 The Associated Students Senate discussed A Resolution to Divest from Companies that Profit From Human Rights Violations in Palestine/Israel at their April 15 meeting at the University of California, Santa Barbara. The resolution was voted upon through the use of a secret ballot, which resulted in a vote of 12-12-1. Internal Vice President Angela Lau announced the tie and, as the senate chair, voted no, and ultimately the resolution failed.

Additionally, a new whereas line has been added to the resolution to state that “despite this connection to the larger BDS [boycott, divestment, and sanctions] movement, we condemn all individuals who express any anti-Semitism, as they do not represent a larger movement.” This new line has been added due to numerous students who have expressed their belief that the resolution was anti-Semitic as a result of its connection to the BDS movement. Kaur stated that the “opinions of a few do not represent the whole,” and that the resolution condemns anti-Semitism within the larger BDS movement.

Sociology department Ph.D student Emily Shneider stated that, as an undergraduate, she was against divestment. However, after living in Israel and Palestine on and off for the past seven years, she has been able to gain a more thorough understanding of the conflict than she had previously.

“What I’ve really come to conclude is that the problem there is not so much about religion, not so much about the things we see in the media, but it is the fact that there are companies over there that are profiting off of the cycle of violence,” said Shneider. “You have an opportunity here as UC students to play a huge role in ending the cycle of violence for both Israelis and Palestinians.”

Shneider first visited Israel in 2009, and she stated that until then she had never met Palestinians and had never seen the conditions in which they were living.

“I saw roads that were built on Palestinian land, and I, as a Jewish person from abroad, am allowed to drive through what was their village just because I am a Jewish person, and these people who had been living there for hundreds of years with their families [could not],” said Shneider. “I have more rights than the people who were actually born there.”

Representatives from several student organizations on campus spoke in support of the resolution during public forum. Among these students was second-year sociology major and president of UCSB Black Student Union, Mariah Boyd.

“As children of the diaspora, as products of colonization, imperialism, and slavery, and as people who have been historically subjected to institutionalized violence and racism, from militarized policing and segregation, we raise our voices to end Israeli apartheid policies,” said Boyd. “Investing in these transnational corporations as we presently are, make our complicity in this conflict unquestionable. To make claims that imply that both the occupied and the occupier are on an equal playing field is not only biased and misleading, but also unjust.”

Among the students speaking in opposition of the resolution was first-year Shiri Arnon, who shared her experiences while living in Israel for three weeks last summer.

“Were it not for the iron dome and Israel’s countless other life-saving innovations, and an extreme love for life, which makes its people continuously think of other ways to protect every single one of its citizens, some of my friends and family would doubtlessly not be alive today,” said Arnon. “The materials necessary for Israel to protect its people from harm come from technological companies that they do business with, and divesting from these companies will not be saving Palestinian lives. It will be condemning Israeli lives.”

Ned Tannenbaum, a fourth-year economics major, echoed Arnon’s statements of contention with the resolution, referencing that the resolution only includes language against Israeli policies and excludes countries that have been violating human rights in similar ways.

“Critiquing Israel is not anti-Semitic,” said Tannenbaum. “Applying double standards that make it possible to solely blame Israel for a decades-long, multi-sided conflict is anti-Semitic.”

Off-campus senator and author of the resolution, Xin Ma, shared her belief that the resolution should pass. She stated that while voting on the resolution, senators should consider how the underrepresented and marginalized students have advocated for divestment for three years, only to have it struck down.

“Those who are victors are often the ones to mainstream the rhetoric that shapes our values and dominates our intellectual institution,” said Ma. “I believe that those who have felt powerless among our system know the best about how power relations operate.”

After a reading of the resolution by Kaur and student co-sponsor Unique Vance, senate voiced their opinions regarding whether the resolution should be passed, sent to committee, or tabled indefinitely. Among those who disagreed with the passage of the resolution was Letters and Science collegiate senator Nikka Kurland. Kurland stated that senate passed A Resolution to Create Socially Responsible Investment Systems at the University of California approximately one year prior.

“We took a stance on this issue as soon as we came into senate, because we knew what a big issue this is,” said Kurland. “I strongly, strongly stand for not investing in any sort of human rights violations and ensuring that our tuition is being invested properly, but this resolution, in my opinion, does not solve that problem… I do not feel comfortable voting yes on something that is going to marginalize a very large population of students.”

After further discussion, a motion to pass the resolution was voted upon through the use of a secret ballot, resulting in a 12-12-1 vote. Lau was given one vote to break the tie, and voted no. At approximately 2:30 am, the resolution failed.