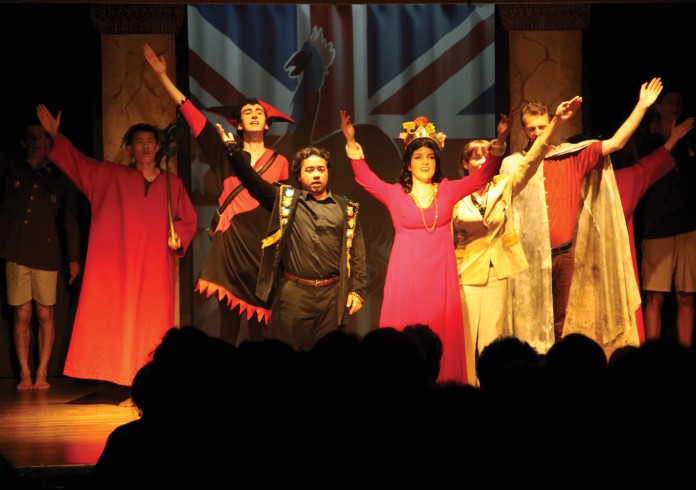 Last week, the College of Creative Studies held its fifth iteration of what they call the CCS Musical TV Project. The completely original piece, Even Greater Britain: A Musical, was held in Old Little Theater, owned by CCS. The first night was witness to a full house, extra seats had to be brought in in order to accommodate the excited audience. In the end, the play was a theatrical success.

A humorous spectacle, the play focused on a small fictitious island named “Even Greater Britain.” Ruled by the short-fused Queen Brave (brilliantly played by Krysten Pfau), the island has a “larger deficit than the U.S.” and no natural resources. When the queen decides to go away, it’s up to her son, Prince Charles Brave (portrayed by Arthur Wu) to lead the country. However, political maneuvering is at hand behind the scenes, and problems arise when Royal Counselor Siddington hatches a plan to take control of the island through a democratic process.

I got to sit down with the minds behind the show, the four playwrights who penned the musical: Daniel Booth, Christine Hamlin, Ethan Reul, and Connor London. I wanted to know how a play like this takes shape, and the trials and tribulations it goes through to reach its final form.

When you are all writing, is there some kind of ‘Writer’s Room?’

Daniel: This wasn’t like a thing where we were all holed up in our little place; the whole process of creating the musical was done with all the creative team at all times.

Ethan: Generally, we would write our draft scenes on our own. For example, let’s say Christine was writing scene one and Connor scene two, we would write them individually, and then we’d bring them all together and we’d kind of workshop them as a group and make sure that the character tones were consistent.

Connor: And then before all that we developed a loose outline of what each scene should look like.

When making final decisions, was there a person with the final word, or was there a vote?

Ethan: With specifically tough choices we would occasionally have a vote, but for the most part it was more of a general consensus without even voting.

Daniel: It wasn’t generally too hard to reach a consensus.

Connor: Each scene is a sort of hybrid of all our ideas, which I think is really kind of cool.

Christine: Yeah, I can’t remember what scenes belong to what writer.

Daniel: Setting. Setting came first. Everyone was instructed to bring—it was the first day of class right—and everyone in the entire musical involved was instructed to bring in a one-page treatment, and I mean, we had a lot of really interesting ideas, and we just went about it as democratically as possible.

Ethan: The one that we went with wasn’t even the one that won. It was originally one where there was this musical about a chess piece, but Daniel’s idea—which was actually the one that came in third—was about this dictator who decides he wants to convince people that he’s a God. We ended up deciding on meshing up these ideas.

Who wrote the lyrics for the musical?

Ethan: A lot of the lyrics were written by different people because that was part of the song process too. We would bring in lyrics and decide which ones we liked best for the song. Kind of like the outline that we worked on.

The biggest twist in my opinion is that democracy failed. What people see as the best form of government failed, and the villain of the play fought for democracy. Also, there were some jokes aimed at the United States, so I was wondering if this play is sort of criticizing the U.S.?

Daniel: It wasn’t so much a criticism of the U.S. We just thought it would be funny to make the villain democracy. It just worked. I think there’s a little criticism in that generally it’s not a very smart thing to say that democracy is good and everything else bad. If you have an incredibly uneducated, buffoonish society as Even Greater Britain has, you just don’t blindly say democracy is best.

The biggest problem I had with the play was the venue itself: Old Little Theater. It was very hot and uncomfortable, which made the last couple of songs feel way too long. Have all the musicals been there?

Ethan: Unfortunately, it’s primarily a budget problem. CCS as a whole, because there are only about 400 students in it at a given time, doesn’t really have that much of a budget to begin with means that our budget for this musical was fairly small. We made really good use of it by using the screen projector to create all our backdrops. We can’t really afford a bigger theater to go perform in because any place other than Old Little Theater we have to rent out.

So there you have it. A great set of performances, coupled with great scores and writers, resulted in a witty and successful play put on by the College of Creative Studies and its students.