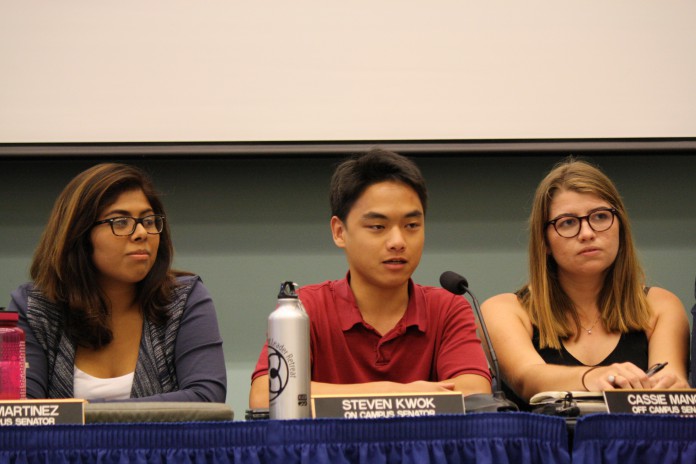 The University of California, Santa Barbara Associated Students Senate passed A Resolution Condemning Anti-Semitism at their April 1 meeting. The resolution was passed with a roll call vote of 24-0-1; the one abstention was on-campus senator Steven Kwok.

“This resolution is really close to my heart,” said off-campus senator and author of the resolution Michelle Moreh. “I’ve grown up Jewish. It’s a huge part of my identity, and it’s been really difficult to come to campus and see so much anti-Semitism that affects us today. I hadn’t really been exposed to this much anti-Semitism until I got to UCSB.”

Moreh stated that recent occurrences of anti-Semitism on university campuses are what prompted her to write the resolution with Izeah Garcia. Among these anti-Semitic acts was the spray painting of swastikas on the chapter house of the Jewish fraternity Alpha Epsilon Pi at UC Davis one week after the university’s senate passed a resolution in favor of divestment from companies that profit from human rights violations in Palestine and Israel. Additionally, flyers claiming that the terrorist acts on Sept. 11, 2001 were a Jewish conspiracy were posted throughout the UCSB campus in Sept. 2014.

“As the university system that has been at the forefront of social justice… we still have swastikas being spray painted on Jewish fraternities at other UC schools,” said Moreh. “We still have student senators publicly endorsing the demise of the one Jewish state in the world, and we still have a candidate of UCLA’s judicial bored being discriminated against on the basis of her Jewish identity, and we still have flyers at UCSB blaming Jews for 9/11. So we should have done this after the first incident happened, we shouldn’t have waited for Jews to be targeted again.”

Third-year history and religious studies double major Arezu Hashemi shared her experiences with anti-Semitism, which compelled her to be a student sponsor of the resolution. Having grown up in a predominantly Jewish neighborhood, Hashemi stated that she had never experienced anti-Semitism as a child and therefore believed that it was “a thing of the past.”

“I used to wear a golden star of David necklace around my neck,” said Hashemi. “One day, I was stopped on the street by an older woman. She praised me for having the courage to wear my necklace with pride… It wasn’t until I stepped out of my bubble, out of my comfort zone, and onto the UCSB campus that I understood why she felt the way that she did.”

Hashemi stated that she had first encountered anti-Semitism during the spring of her freshman year, when she learned of the BDS movement. Since then, she has believed that anti-Semitism is detrimental to her life and well-being on the UCSB campus.

“For the first time in my life, I felt that my identity, an unchangeable part of who I am, was under attack and my entire existence as a Jew was being questioned,” said Hashemi. “No one in this room can look at this past year’s incidents and tell me that anti-Semitism doesn’t exist… I don’t wear that star of David necklace anymore. I don’t tell most people that I’m Jewish, and I definitely don’t tell them that I’m pro-Israel. I actively hide these things because I’m scared. Forget the fact that people treat me differently, forget the fact that I’m subjected to racial remarks and slurs. I’m scared for my safety.”

UCSB Alpha Epsilon Pi chapter president and student sponsor of the resolution Daniel Lifton also spoke on behalf of the resolution, stating that he is “truly fearful” of the AEPi chapter house becoming a target for anti-Semitic acts.

“As the Associated Student body, you are a representative for us all, and this resolution proves that you stand in arms against any anti-Semitic act,” said Lifton.

“Because I feel that the issue of anti-Semitism is so intricately linked to the BDS movement because… every time these issues have been brought up they have been brought up together, I would feel much more comfortable if we tabled this resolution for one week,” said Kwok. “We can give all of ourselves more time to consider the various repercussions that could happen if we decide to [vote on] this resolution today. We all do have differing [opinions] of these policies.”

Despite Kwok’s opposition, the resolution was brought to a roll-call vote and was passed by 24 votes, with zero opposed and Kwok as the only abstention.