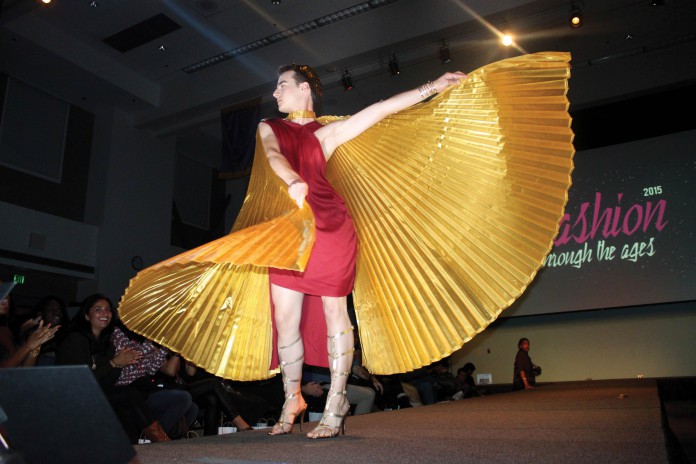 Hundreds of University of California, Santa Barbara students lined up outside Corwin Pavilion on Thursday, Feb. 26, to get seats for the Resource Center for Sexual and Gender Diversity’s (RCSGD) second annual fashion show: Fashion Through the Ages.

Last year, the RCSGD brought Isis King—the first trans woman contestant on the show America’s Next Top Model—as the host, and their first fashion show was a huge success. This year, the resource center brought in an even more influential modeling icon, Miss J. Alexander. Alexander, a runway coach most known for his role in America’s Next Top Model, is a prominent figure in the fashion and modeling industries. As a gay black male figure in the modeling industry, Alexander was a solid choice to host the RCSGD’s fashion show, which promotes beauty of all kinds.

“Our hope for this fashion show is that we provide a space for students to feel beautiful, to feel confident, to feel affirmed and powerful in their identity,” Rubio said. “We want to make sure that we are showing how diverse our campus can be and how many students here that there actually are of different types of gender and sexual expressions.”

In addition, Rubio said that a goal of the fashion show for the RCSGD is “to make sure that we’re always trying to challenge these different hegemonic influences that try to police our bodies, whether that be through the types of clothes we’re wearing, the way we’re walking down the runway, the way we interact with each other, and the types of guests that we bring to this school.”

The fashion show opened with an interview between Alexander and the Associate Director of LGBT Services in the RCSGD, Klint Jaramillo. Jaramillo asked Alexander questions about how he experienced race, gender presentation, and sexuality in the fashion and modeling industry.

“I just walked right in [to the fashion industry], and I didn’t think there was a gay, straight, bi, transgender thing,” Alexander said. “I just went, and if it worked then it did or it didn’t. I’m not sensitive to that stuff.”

Alexander saw his minority identities more as ways to set himself apart from others rather than as sources for discrimination in the fashion and modeling industries. “I think if I stood back and thought about the things that I did not get because I was black, I’d think about how I was blessed because I’m black, and the things that I’ve gotten because I’m black, because if I didn’t get those things, I wouldn’t be here talking,” Alexander said. “No one can block your blessings. Those are yours at birth.”

After the interview, Alexander invited audience members to come onto the runway and compete in a walk-off—some of these impromptu models were even sassier divas than the models of the actual show.

“She sissied that walk,” Alexander said, while watching one of the male students strut and pose on the runway.

The fashion show went on with a lot of lights, cameras, and Beyoncé songs. The show included students of different gender and sexual identities, featuring some students dressed from different time periods, in accordance with the show’s theme, and many models in drag.

“It’s nice that UCSB has such a prominent and well-accepted queer community that is able to put on events like [the fashion show] so people can come together and enjoy themselves,” said attendant Christine Amador, a fourth-year English and psychology double major. “It definitely makes me feel more accepted to be here.”

After the show, the models expressed what drag and dressing up meant to them in an interview.

Her second time participating in the fashion show, Kathleen Tang, a fourth-year mathematics major, dressed in drag publicly for the first time.

“Ever since I was little, I was really tomboyish and adults around me told me that this was ‘bad,’ so that had a lot to do with how extreme my internalized homophobia became,” Tang said. “It’s important for me to do [drag] because it’s embracing my masculine side and showing that I don’t care how I express my gender: I do whatever I want.”

Brandon Pineda, a fourth-year sociology major appreciated how the RCSGD puts on this event to defy hegemonic beauty standards. “I think this is a great example of how not everyone here is a ‘super-star America’s Next Top Model,’ but people are here however they want to dress, whatever makes them feel pretty, and they can walk out and strut their stuff,” Pineda said.

Max Ochoa, a first-year English major, dressed up for the fashion show as a “flower child” to represent the queer community as an officer of the Queer Student Union. “I’m a pretty active member of the queer community and I just want to show our colors,” Ochoa said. “I think it’s important to normalize queerness on campus and just make it a more prevalent thing.”

The RCSGD offers programs, training services, and other resources to LGBTQ students, in addition to the work they did with the fashion show. The show’s other co-host, Manny Suarez, talked about how he benefits from the work that the resource center provides.

“The RCSGD is amazing,” Suarez said. “They helped me out through my coming out process and without the people there and the resources provided, I would not be who I am today. It’s because of my coworkers, my bosses, the resources, and events like [the fashion show] that I’m able to express who I am without being afraid.”