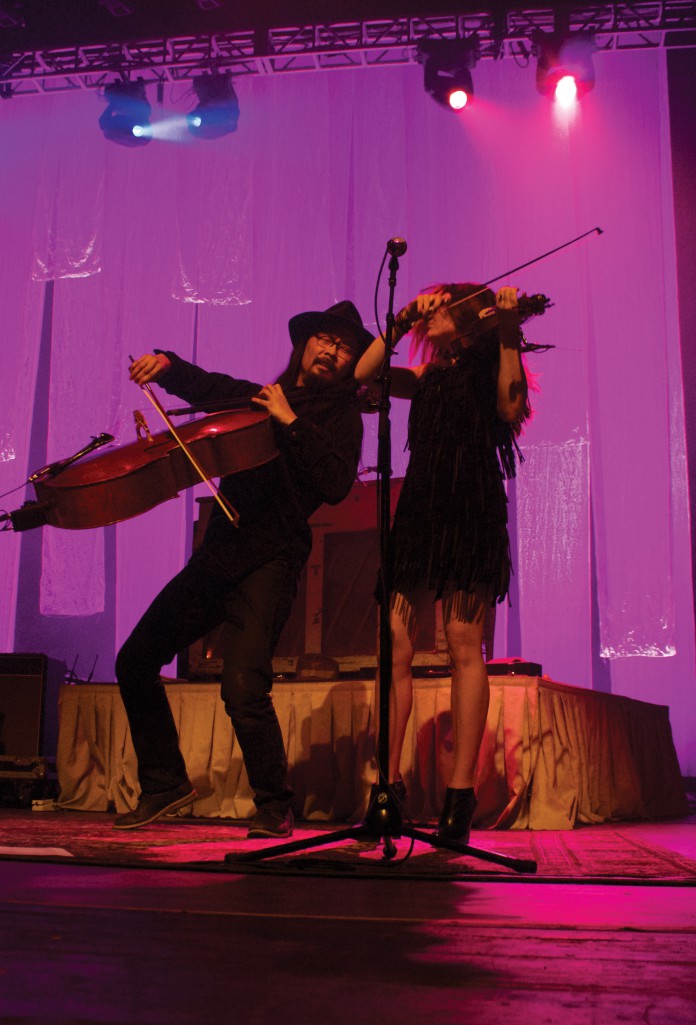 It seems like almost every other band you listen to today is some kind of bluegrass/folk/indie rock hodgepodge, yet despite this onslaught of indie folk bands, The Avett Brothers manage to stand out. They were gracious enough to bring their considerable musical talent to Santa Barbara, holding a concert on Tuesday, Feb. 10, at the Arlington Theater as part of a series of events put on by the University of California, Santa Barbara’s Arts & Lectures.
The Avett Brothers is a band from North Carolina, started in 2000 by brothers Scott and Seth Avett, who play the banjo and guitar respectively. Joining them is Bob Crawford, the band’s bassist and occasional backup vocalist, and Joe Kwon on the cello, as well as three other touring band members, Tania Elizabeth on violin, Mike Marsh on drums, and Paul Defiglia on the keyboard.

While there are many flash-in-the-pan bands that feature a similar style, The Avett Brothers produce a sound and style that is authentic. Not only do they have the longevity to prove it, but they also feature a good deal of complexity in their down-home music that few bands can claim. By combining many different styles of music, like bluegrass, folk, and rock and roll, they create their own unique sound.

During the concert, The Avett Brothers mainly played songs from their albums I and Love and You, The Carpenter, and The Magpie and the Dandelion. They also played songs from other albums, performed covers, and previewed some original songs that are not yet on albums.

The set list ranged from softer songs like “Shame” and “Laundry Room” to more upbeat songs like “Live and Die” and “Satan Pulls the Strings” before it eased back into slower songs again with “Murder in the City.”

At the end of the night, the band left the stage, but nobody in the crowd was ready for the concert to be over. The standing ovation continued for several minutes before The Avett Brothers once again took the stage to perform an encore. They played “Die Die Die” first, a very upbeat song that got the audience back to their feet. They harnessed the energy from the crowd and played a beautiful rendition of “I and Love and You” to close the night, asking concert goers to sing along.

The Avett Brothers’ music brings people together on a level of human understanding as they adeptly share their experiences through music. Rooted in raw emotionality, The Avett Brothers are able to write songs that rely on those listening to bring them to life. The listeners shape and mold the songs, not the writers or performers, which allows for a very different reaction and experience from every single member of the audience. There was not a person in the theater that did not feel the rawness in Scott Avett’s voice as he sang “I love you and I’m proud of you both in so many different ways” when singing about a conversation with his father.

Overall, the concert was a great experience. The interactions with the crowd and responding to fans yelling to the stage created an atmosphere akin to sitting in somebody’s living room as they try out some new music for you. The entire band had an incredibly infectious energy that brought the crowd to its feet, and both Seth and Scott are so naturally talented that they almost sounded better live than on their studio recorded albums.