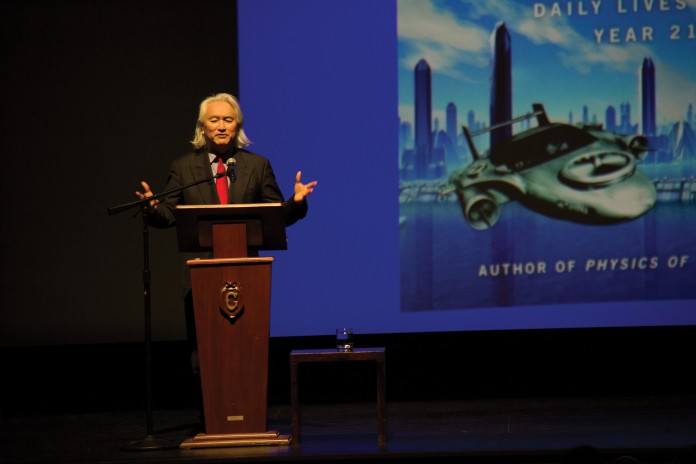 According to Michio Kaku, world renowned theoretical physicist and professor at City University of New York, predicting the future can be a tricky business. As he stated in the beginning of his talk entitled “The Future of the Mind: The Scientific Quest to Understand, Enhance, and Empower the Mind” at Granada Theater on Wednesday, Jan. 28, developers of the Internet predicted the World Wide Web would mainly be used, “as a forum for high culture and high art—a place for ideas. The internet today is 37 percent pornography.”

This goes to show that even the world’s greatest minds have difficulty foreseeing what comes next, a scientific study known as futurism. Futurism has been the subject of Kaku’s past three books: Physics of the Impossible, Physics of the Future, and his newest and best-selling novel, Future of the Mind. The question is, how can we trust Kaku’s predictions when similar ones in the past have proven so erratic?

Kaku’s credibility lies within his incorporation of modern research and historical data into his predictions, taking them beyond the foggy realm of pure speculation. Future of the Mind also focuses on changes set to occur in the next five years, because that time span is close enough to the present to make credible predictions. Much of the science in his book relies on Moore’s Law, which says computer processing power on new devices will double every 18 months.

According to Kaku, calculations based on this law predict that computing power in 2020 will be so powerful that silicon chips will not be able to conduct enough energy to keep up. At this point advances in computing will continue through quantum computing, a revolutionary technology using atomic particles to power computer processors.

When humans make the leap to quantum computing, computer chips will become more and more interwoven into our lives, fitting into thinner materials than they ever could before. Kaku predicts we will fit computer chips into interactive “e-paper,” wallpaper than can change designs at will, and computerized glasses and contact lenses to provide us with an in depth description of our environment. As humans accustomed to the digitization of life, electricity and computer chips will become so common that, “they will disappear from all languages. Computer chips and electricity will be so common they will be everywhere and nowhere at once,” says Kaku.

Even more alarming are Kaku’s predictions for the future of artificial intelligence. Right now, most people would point to self-driving cars as the most impressive current application of AI. However, they’re nothing compared to what Kaku says is coming next. In the future, AI technology in robots will be advanced enough to create household “robo-doctors” and “robo-engineers” to give us a quick diagnoses or help us fix a broken machine. These robots will by no means replace a trained doctor or engineer, but they can help us with simple sicknesses and mechanical problems. Other possible advances include “smart pills” equipped with tiny TV cameras that collect data on your gooey insides and use AI to analyze the results, and a toilet that analyzes your biological waste for fragments of cancer cells, with the potential to identify the disease a decade before a tumor forms.

AI is exciting, but it falls short when compared to the impending advances regarding the human brain. Kaku’s predictions about the future of the human brain are also the subject of his current lecture tour supporting the release of his new book. According to Kaku, scientists have already identified 30,000 points in the brain where blood flows in response to different stimuli. Scientists are using this data to translate our thoughts by mapping the way blood travels through our brain, essentially reverse-engineering human experience. These new discoveries are already being applied in medical technology, like the robotic suit a paraplegic man used to kick off the World Cup last year.

New discoveries in the brain are also reshaping the way we think of emotion and consciousness. The more scientists study the brain, the more they understand it as a mechanical device. A mechanical view of the brain poses difficult questions, such as if a man murders another man, is it his fault, or is his brain just wired to do that? Or what constitutes the experience of seeing the color red? Will other forms of life see more when perceiving red? Will they see less?

Michio Kaku portrays the future as a place with answers in unexpected places and questions we never knew we had. His predictions are wild and mind-bending, but just reasonable enough to be true. And trust me, they’re way cooler than flying cars.