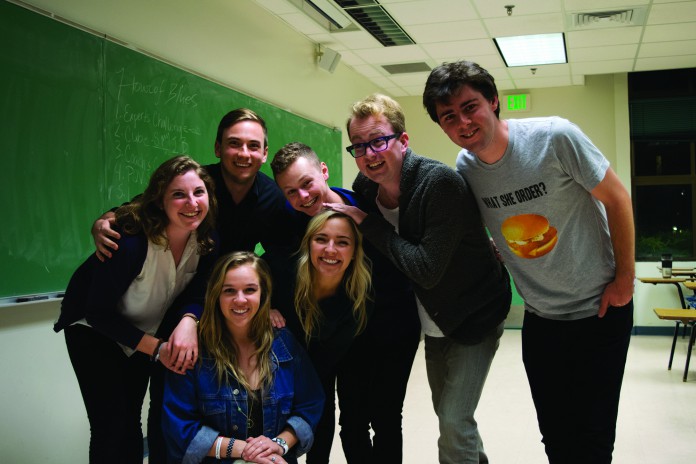 Improvability is an improvisational comedy troupe that hosts unscripted theater performances, in which the dialogue and characters are collaboratively created by actors on the spot, so the audience witnesses the plotline unfolding onstage in real time. The main appeal of this comedic entertainment is the novelty of watching scenes that have never been performed before, and will probably never be performed again.

In fact, Improvability’s talent has recently brought them prestigious recognition, for the 13-student group was named the regional champions of the College Improv Tournament this past January. This upcoming March, they will be competing in the national tournament in Chicago against 16 other improv groups from across the country.

Given that it was Improvability’s first time ever participating in a competition, many of the members were shocked that they became first-place champions, but were grateful for the knowledge and insight gained from the experience.

“We just came in expecting to have fun and learn a lot,” said Madeline Blair, a fourth-year film and media studies major. “The way it turned out was amazing, knowing that our team has come this far. It was really cool to be actually judged and get the judges’ feedback. It was a great experience.”

Improvability can partially owe their success to their weekly three-hour practices, during which the comedic team practices acting exercises and rigorously prepares for their next show’s theme by dissecting that specific genre in order to expose elements to incorporate into their own acting.

“We do some sort of studying up,” second-year economics and Chinese double major Michael Calmis stated. “Last practice, we worked through the tropes about what makes the House of Cards a political thriller, and we broke it down.”

Another reason why Improvability is exceptionally talented is due to their intergroup friendships, for they’ve become an extremely tightly-knit group of friends and teammates over the years.

“I have no idea what my life would be like if I didn’t join Improv,” Blair said, confessing, “It’s been my college identity. I’ve never had a group of friends this close, and we’re just a bunch of goofballs. We’re such a diverse group, but we work, and it’s really cool that we can all come together and be connected as one mind, because when moments like that happen, it’s magical.”

Despite the diversity of their members, with their ranging levels of comedic experiences and different personalities, when they come together to practice and perform, Improvability’s chemistry and personal bonds allow them to create a truly brilliantly delivered performance onstage.

“It’s like this elite form of play, but with your friends,” Calmis said.

“It’s like making an audience watch you play with your friends and creating these worlds that you can just live in together,” Blair chimed in.

Improvability’s onstage chemistry and interactions with the audience were evident in their humorous scenes full of witty puns and quotable one-liners that Friday night, as they successfully delivered a short play based on the award-winning Netflix political thriller in anticipation of the upcoming fourth season. The show was centered on the fictional Senator Gale Roberts, a caricature of House of Cards’ protagonist, a conniving and merciless man who only seeks to gain prestige by manipulating everyone around him.

Much like the original Netflix series, Improvability’s show was brimming with deceit, murder, adultery, and the dirty truths behind the world of politics. As said by Ian Davis, a fourth-year English major and the actor of Senator Roberts, “One man’s ice cream server is another’s way to the presidency.”

The show accurately portrayed the tropes of the political drama, while the group’s raw creativity resulted in memorable characters and dialogue. Through brief, interrelated scenes that evolved into a complex plotline, the actors delivered fast-paced humor and witty lines that simultaneously left the audience members on the edge of their seats and gasping for air from laughter.