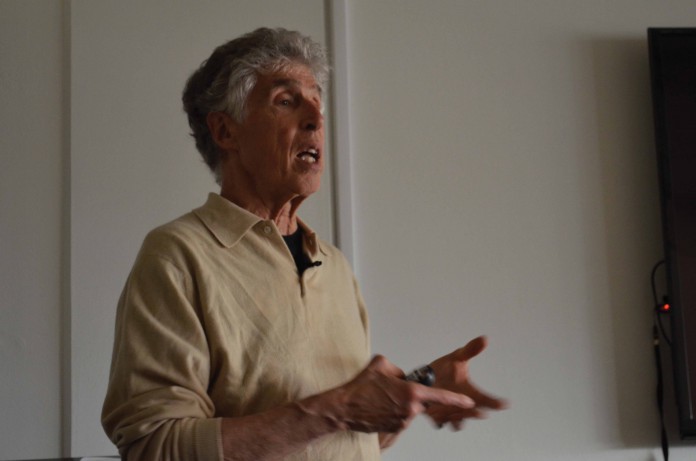 If you’ve been to the library this past month, you’ve probably come across a set of haunting photos on the first floor by the elevators, entitled “Juvenile-in-Justice.” Part of the University of California, Santa Barbara’s annual event UCSB Reads, this exhibition aims to bring awareness on matters such as the current juvenile detention system, discrimination against minorities, and gender issues. The person behind this display is UCSB Art Professor Richard Ross who, for the past eight years, has dedicated his time and effort to try to make a change in America’s juvenile correction facilities. On Feb. 3, Ross presented his work at the Davidson Library’s Mary Cheadle Room.

In the beginning of the presentation, he showed us one of these weapons that he hopes will make a change. He juxtaposed two cells, both very similar in size and shape. Both had brick walls and a small bed for the prisoner. The difference was that one of those cells had a window while the other just had a bare wall. These images might not mean anything until you’re told that one of the cells is for holding kids as young as ten years old, while the other is for holding the worst terrorists in the planet.

“Who has the window?” Ross asked the audience. He answered, “The terrorist, not the kid.”

Ross gave a worrisome explanation. “Why do we [incarcerate] kids?” he asked, elaborating, “Because we can bully kids. If you bully somebody that is a person of color, you might get some pushback; you might get sued. Kids can’t sue anybody; they have no rights.”

A child who is accused of something has no way of defending his or herself, especially if accused by an adult. Only an adult can truly defend a child. The problem is, all of these incarcerated children usually come from a fractured family, and have absolutely nobody to defend them. It’s a vicious trend, one that seems to have no end.

“95 percent of the kids in prison or detention in Pennsylvania are from two zip-codes,” Ross said. “They tore down three schools in the Kensington area of Philadelphia and they put up a brand new detention center. So the kids of the neighborhood said, ‘That building is where I’m going to school. That is my school.’”

One of the images on the first floor of the library consists of a pair of fists with the tattoo that reads “fuck love.” According to Ross, this is a very common tattoo among the young population in detention centers. These tattoos show how hopeless some of these kids feel.

Near the end of his presentation, Ross showed some of the restraint devices that are used in girls’ detention facilities when kids disobey. Images of chairs with leather straps and tables with manacles came on-screen.

“These aren’t historical,” Ross said. “These aren’t Game of Thrones medieval torture [machines]. This is being used today in a girl’s institution in Oregon. How do you do that to a kid?”

Ross believes that reaching out to your community and just talking with a kid could have immense ramifications. Indeed, there are numerous ways that you can make a difference he said, and one of these ways is to donate books to kids in prison.

The Prison Library Project aims to give inmates an opportunity to become immersed in literature. Davidson Library is currently accepting donations in their lobby, as well as the Arts library.

Ross’s photos have already been used in congressional hearings and even in the Supreme Court. If you wish to get involved in making a change, he suggested taking his class this upcoming spring quarter. He will be teaching Intermediate Photography (ART 120). Photos shown in the first floor of the library are part of his newly released book Girls In Justice.