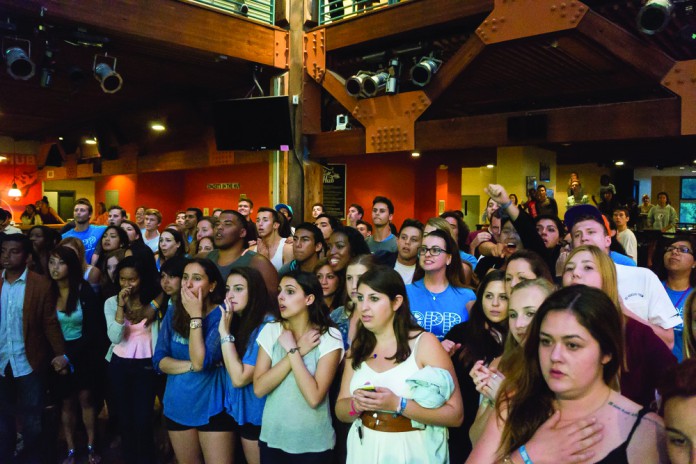 The Open People’s Party, the largest and oldest political party on the University of California, Santa Barbara campus, has become a topic of increased controversy due to the nature of its slating process, which some believe is undemocratic and exclusionary.

Currently, two political parties—the Open People’s Party and the Democratic Process party—hold positions within the Associated Students senate and executive offices at UCSB. OPP consistently dominates the AS Spring Elections, holding a majority of seats on senate and the executive offices year after year. OPP’s candidates are decided by party members, while DP’s are democratically elected in an open primary. As of press time, DP has not submitted an intent to run in the upcoming election.

Liam Stanton, a College of Creative Studies collegiate senator who ran independently; Xin Ma, an Off-campus senator who ran with the DP party; Andre Theus, party chair of OPP and Chief Financial Officer of the AS Finance and Business Committee; and an anonymous former senator discussed the processes by which OPP and DP choose their candidates for AS Spring Elections, as well as OPP’s allegedly unfair slating practices.

Alex Smith is an anonymous former OPP senator who served during the 2013-2014 academic year whose name has been changed for the purpose of anonymity. Smith confirmed the allegation about whether OPP considers physical attractiveness when slating students for candidacy.

Stanton compared OPP as a whole to a fraternity because of how secretive the organization is and how its members are selected. According to Stanton, members of OPP often refer to the organization as “Omicron Rho Rho,” what they suppose would be their Greek letters if the organization were actually part of the Greek system.

“It’s pretty much if they like you, if you get along well with them, if you’re not going to cause much trouble, if you’re attractive, [and] if you’re well-suited for the position,” said Stanton. “That’s probably their priority list, probably in that order.”

Smith described the slating process more elaborately.  They described it as a point system in which the party chair and campaign director consider party involvement and duration of affiliation when totaling the number of points for each member of the party.

Smith emphasized that alumni always have the highest point total because they typically have been in the party the longest, having four years to obtain points from being a member of OPP, holding an elected position, and being involved in AS. According to Smith, the point system is evaluated in secret and is not supposed to be discussed with the public. Because of the uneven number of votes candidates get, Smith believes that the party “can’t really say they’re [the] Open People’s Party if the people don’t get the same amount of votes.”

Comparatively, DP holds an open primary where any student has the opportunity to run for candidacy, regardless of previous involvement with DP or AS. Ma stated that when running for DP, students attend a meeting where they may be nominated, after which they will give their candidacy speech at a Primary, and students elect the candidates they would like to run in the election. According to Ma, all students are allowed to be nominated, as well as attend the primary and vote for candidates.

OPP Party Chair Theus stood by the process by which candidates are slated, despite the comparative difference.

Theus stood by OPP’s slating system and described the qualities he personally looks for in a senate candidate. When slating candidates, Theus looks for students who are “fresh faced,” “eager,” and “ambitious,” who are aware of the campus and the issues that undergraduate students face.

However, Smith stated that OPP considers too many ambitious candidates as a threat, and will consider what is best for the party when slating candidates who may have too many ideas of their own.

“You have leaders and you have followers,” said Smith. “Some people naturally lead, and some people naturally follow. The downside of being senators is you have the type-A overachieving personalities, which isn’t bad. But when you have an entire slate of type-A overachieving personalities that want to get everything done, you’re not going to get anywhere because you have a million different people running in a million different directions.”

According to Smith, during the campaigning process OPP candidates are consistently overworked and are encouraged to go to parties as a campaign strategy, despite the campus-wide goal of improving UCSB’s party image.

“They make sure people go to parties,” said Smith about their experience when campaigning with OPP. “[Candidates] can’t get too drunk, so they have a buddy. They’re constantly socializing. Things like that. Alcohol, a lot of alcohol […] They encourage you to go out every night.”

“There’s definitely a lot of schmoozing and wining and dining going on,” said Smith. “It was generally alluded to, ‘Basically, don’t look like sh-t.’”

Additionally, Stanton opined that OPP’s success is also due to student distaste for the opposing party.

“DP is an extremist party, and that’s why most people don’t vote for them instead of OPP—because nobody wants to be represented by extremists,” he said. “But OPP is a very shrewd party, and they know how to win elections, and they know that they’re not going to lose power. That’s probably the reason that they are so comfortable acting this way.”

Theus acknowledged OPP’s majority, stating, “It’s hard when OPP has such a large majority on senate, year to year, and the only DP spots are either the one person who won or a resignation that we may have on our side.”

Ma, who ran with DP, stated that in the time that she has been on senate and interacted with various senators, she has noticed that senators do not always take the same side, regardless of partisanship. However, OPP’s majority is a concern in terms of student representation, and Ma shared her thoughts about why she thinks OPP sweeps every year.

“I personally think that if you have one party in office previously, it’s easier for them to sweep again the next year,” said Ma. “Let’s say this year, it’s mostly OPP people. They have their fellows, all the freshmen, and they’re the ones in AS, and so they’re able to know all those people and have access to execs and the people in their party and their friends. So by the time elections come, a lot of those people already have that connection.”

According to Smith, OPP will slate some candidates based on the candidates’ own ambition, and others based on how likely they will be to cooperate with what the party wants to accomplish.  Smith stated that OPP’s overall goal is to win an election, and they choose the candidates who will work best with their campaigning strategy.

“These are rocks you paint to make look like shiny diamonds,” said Smith. “They’re not bad people at all, but they’re not the best. They’re the people that are going to win an election. And yes, they slate some of the people to do good throughout the year, but how you win an election is definitely a big factor. You run OPP to win. DP runs on ideals. OPP changes every year because the ideals change with different people, but the system stays the same. OPP you run to win. You run to change, but you know running with OPP is you sell your soul for two weeks. But that guarantees you a win.”

The AS Spring Elections will take place on GOLD during April 20 – 23.

This article is the second installment in “Guilt by Association”—a series of investigative articles covering student government and campus representation. New articles will be published in the coming weeks.