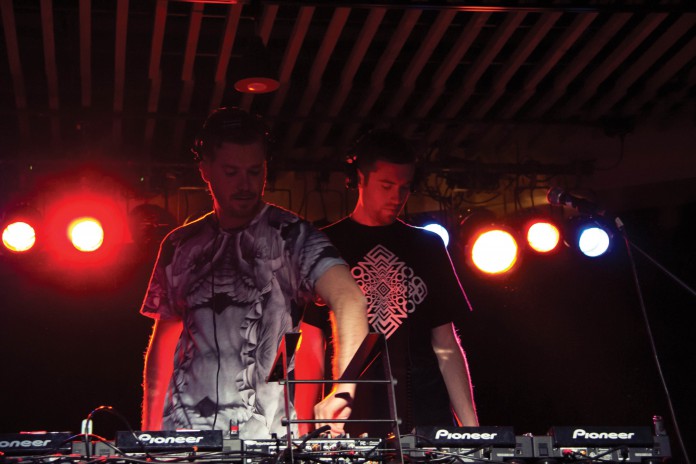 As we quickly approach the end of winter quarter, many students at the University of California, Santa Barbara use these liminal weeks between midterms and finals to unwind and relax a bit before the stress of the upcoming weeks begins to set in. Those in the crowd at The Hub on Sunday, Feb. 22 would seem to agree with this statement, as students ranging from freshman to seniors gleefully took the opportunity to celebrate a great night of music during Gorgon City’s show at UCSB, presented by Associated Students Program Board.

Gorgon City, a duo composed of Kye “Foamo” Gibbon and Matt “RackNRuin” Robson-Scott, made their Santa Barbara debut following an intense series of shows across the United States. This series included a stop at Irving Plaza in New York on Feb. 17, and shows at the Concord Music Hall in Chicago, the Fonda Theater in Los Angeles (which also included an after-party that stretched into the early hours of the morning), and the Mezzanine in San Francisco during the four nights before their show at The Hub.

This long stretch of travelling produced a visible amount of fatigue for Gorgon City, who seemed quite tired at the beginning of the show. However, as their hour-long set progressed and they began to play some of the more popular tracks from their album Sirens, including “Ready For Your Love,” “Here For You,” “Unmissable,” “Real,” and “Go All Night” (featuring Jennifer Hudson), the duo became more energized—reflecting the impressive amount of energy that emanated from the crowd of students.

Considering that the show took place on a Sunday night, the turnout of about 700 students in The Hub was quite impressive. Students danced happily and freely throughout the night. Additionally, many brought along glow-sticks and other accessories that matched the aesthetic of a modern-day dance party.

The night began with a DJ set from Andy Tsou, a fourth-year political science and philosophy double major. Tsou played a variety of house, garage, and future funk tracks from artists such as HNNY, Tove Lo, Gold Fields, and Jessie Andrews, showcasing some of the music played on his own radio show on KCSB.

Almost immediately after Tsou had left the stage, Gorgon City was prepared to begin their own eclectic set that featured not only songs from their own catalogue, but many other skillfully curated house and garage tracks that kept the crowd energized between their own productions.

Each of the tracks played from Sirens drew a great reception from the crowd, who enthusiastically sang along to each song, demonstrating the strong fan-base the duo has established within the past year.

Although this was Gorgon City’s first show at UCSB, it is interesting to note that one of the group’s members, Kye Gibbon, played his first show ever in the U.S. as Foamo in The Hub back in 2009, far before the Gorgon City project had begun.

If you missed this show, don’t fret, as there will be plenty of chances to see this up-and-coming band in the coming months. Gorgon City is continuing their worldwide tour, which will include a stop at both weekends of Coachella.

Although to Gibbon it may seem as if things have come full circle with his return to Santa Barbara, Gorgon City are far from finished in regard to their musical career. I suggest that, once we all get finished with finals, everyone should take some time to unwind a little with Gorgon City like I did this past week.