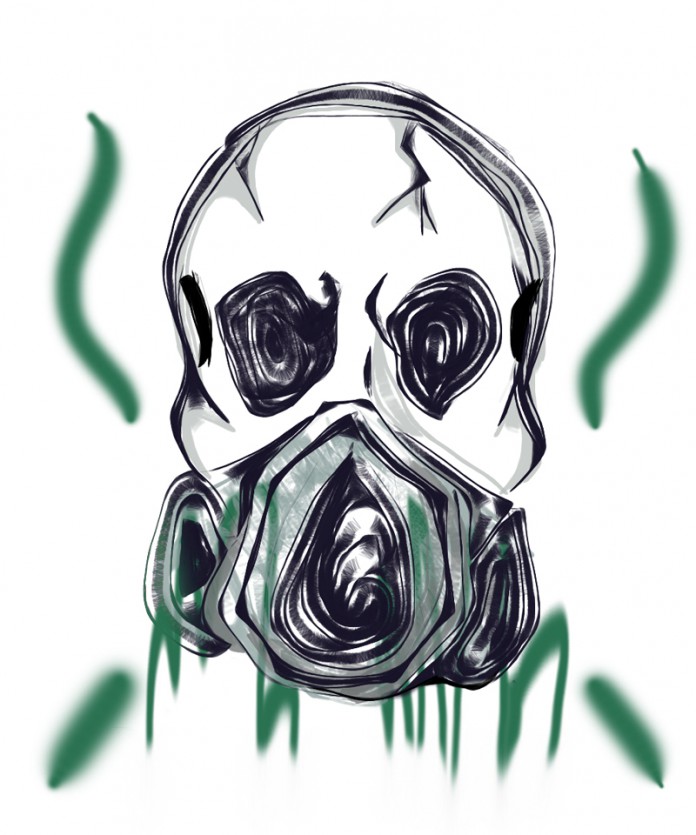 The air surrounding the Indian capital of New Delhi has reached dangerous levels of contamination, with an average 226 micrograms of PM2.5 per cubic meter, or particulate matter measuring less than 2.5 micrograms in diameter. PM2.5 is a particularly dangerous material to breathe because it is small enough to access and harm deep levels of the lung. As a comparison, Beijing’s notoriously polluted air has an average of 95 micrograms per cubic meter of PM2.5, making Delhi’s air almost 2.5 times as toxic.

According to the New York Times, a major reason for the high levels of harmful smog in Delhi is “the widespread burning of garbage, coal, and diesel fuels.” Burning these materials release excessive amounts of “sulfur, dioxins, and other carcinogenic compounds.” The practice of using cow dung as cooking fuel also has negative effects on air quality, as well as the eight coal-fired power plants and seven million cars running within the city limits. Breathing in these chemicals day after day has had a profound effect on the health of Delhi residents.

A shocking report issued by the Indian Journal of Community Medicine in 2013 showed that a representative sample of Delhi residents had a 40.3 percent reduction in lung function, as compared to a 22.1 percent reduction in control groups from rural areas of India. Another study, authored by Dr. James Gauderman of USC in 2004, revealed that children raised in areas with PM2.5 levels of 30 micrograms per cubic meter showed remarkably worse restrictions in lung function compared to a control group of children raised in areas with 5 micrograms per cubic meter. Delhi’s air has 226 micrograms per cubic meter. The subjects’ lungs have not healed since the USC study was conducted a decade ago, hinting that the effects of PM2.5 oversaturation are permanent. In addition, asthma accounts for approximately 1/6 of all deaths in India, or 1.5 million people each year, as a result of indoor and outdoor pollution. Thanks to its poor air quality, India leads the world in deaths attributed to respiratory illness and asthma.

The Indian government recently revealed a plan to curb its country’s pollution. According to the Washington Post, President Obama and Indian Prime Minister Narendra Modi recently signed a climate deal including a pledge for solid progress on, “[phasing] out a class of widely used refrigerants called hydrofluorocarbons, and support for solar energy initiatives to help India reach its goal of expanding its solar energy capacity to 100 gigawatts by 2022, an amount equal to the energy of about 100 nuclear power plants.”

Delhi has also taken measures to improve its air quality in the past, and conditions have improved since the turn of the century. The city has introduced unleaded petrol, curbing a dangerous lead poisoning problem that was harming children; reduced levels of sulfur and benzene sold in fuels; developed more public transportation options, like subways and Metro rails; and enacted stricter pollution restrictions on vehicles.

On the other hand, India is also planning on doubling its coal production to meet its population’s power needs and boost the country’s economy. Scientists worry about the effects that this increase in coal usage will have on global warming in India, one of the world’s warmest and densely populated nations. Still, despite Delhi’s abhorrent air quality, both the United States and China emit more greenhouse gases than India, so it’s clear that all nations have a lot of work to do.