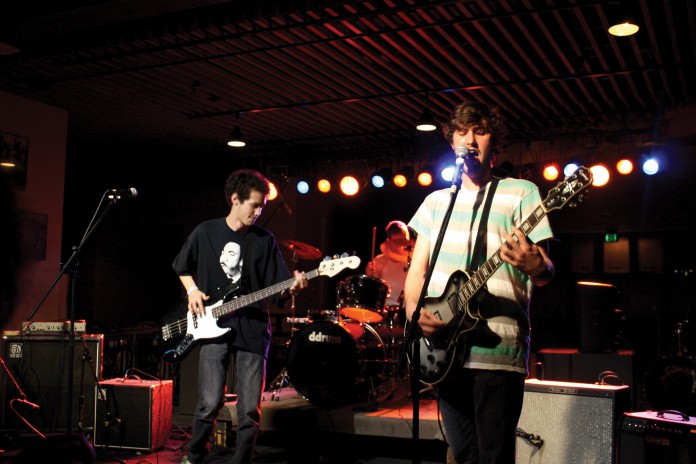 The 2015 Battle of the Bands competition took place at the Hub in the UCen last Thursday night. After last year’s controversial judging decision, the panel this time around included a representative from KCSB, as well as one from Roselane Studio, which also sponsored the event. Bearing in mind that an actual professional would be judging and eventually producing the music, I was excited to see what the bands around the campus of our fine university had to offer.
The first group to emerge was a standard three-man group by the name of Superimposed Explosion. The pop-punk band started off with a song that was entirely instrumental. This may have been a flawed idea in retrospect, considering it didn’t do much to warm up a crowd that was still formulating. Unfortunately, the lead singer’s voice was heavily muted next to the roaring of his electric guitar, so the songs fell a little flat, perhaps undeservingly.

I noticed the excitement level grow significantly as the second band prepared to take the stage, a five-piece group by the name of Dad Clothes. The band, which featured a very enthusiastic keyboardist and a talented lead singer, played joyously through a set of crowd-pleasing tunes, including a particularly spirited cover of “Dancing in the Moonlight” by King Harvest that had many of their fans singing along. What I particularly enjoyed was how engaging the band was with the crowd, injecting some life into the evening and getting many of the students to dance.

The next band to take the stage was Yonder, a folksy jazz group of four, among which was a gentleman performing on an upright double bass. Unfortunately, the loud supporters of Dad Clothes were in the midst of disseminating during the band’s first song, and their noisiness partially drowned out some of the group’s soft, understated music. Nevertheless, Yonder stole back much of the show with two surprisingly touching original songs, carried by the wonderful voice of their lead singer. The band was sounded somewhat professional at times, and earned some high reception from the audience.

In sharp contrast with Yonder’s serene performance, the next group, Hidden in Fractals, won whatever award could have existed for the most adrenaline-charged act of the evening. The lead singer was dressed in as what I can only guess was a hipster-witch costume, while the two guitarists donned a Batman suit and a Chinese robe, respectively. It may be unwise to define one of them as the lead singer, however, as the aforementioned witch-costumed girl spent most of the time prancing around the stage, blowing bubbles at the crowd. It made for an interesting sight, but the music, which mostly consisted of rock ’n’ roll with spoken interludes by the girl felt a little secondary to the set-up. The lead guitarist had some shining moments here and there, but ultimately the set left a good deal to be desired.

The final act, Four Closure, brought the emphasis right back to the music. They pulled few surprises, but jammed through some remarkably well-played alternative tunes. The result was rousingly entertaining, and their combination of excitement and ability earned their deserving victory of the competition. Their performance included an impressive slap-bass solo by their talented bassist in the first song, and the lead guitarist’s two solos lived up to the lead singer’s bravado. The highlight, however, was their song titled “The Isla,” a groovy tribute to Isla Vista that brought the house down in a jovial, passionate spirit. Their win of the competition was thus hardly surprising.

Instead of the usual performance at Extravaganza, the winning band this year will receive a free recording session, and professionally produced three-song demo. This change in prize demonstrates greater confidence in the winning band, and is much more useful than the usual performance. By giving a recording session at a professional studio as a prize, our school and AS Program Board has given Four Closure a greater chance at creating long-lasting success, rather than the fleeting novelty of a large-scale performance. In that regard, this event is much more serious than what I had previously experienced. My own experiences with these competitions had been limited to high school contests that took place over lunchtime, with judging panels that consisted of teachers that often made embarrassingly poor decisions. I’m pleased to say I finally had a reason to come back to a Battle of the Bands competition after Thursday night, as the display of our school’s diverse musicians was thoroughly enjoyable.