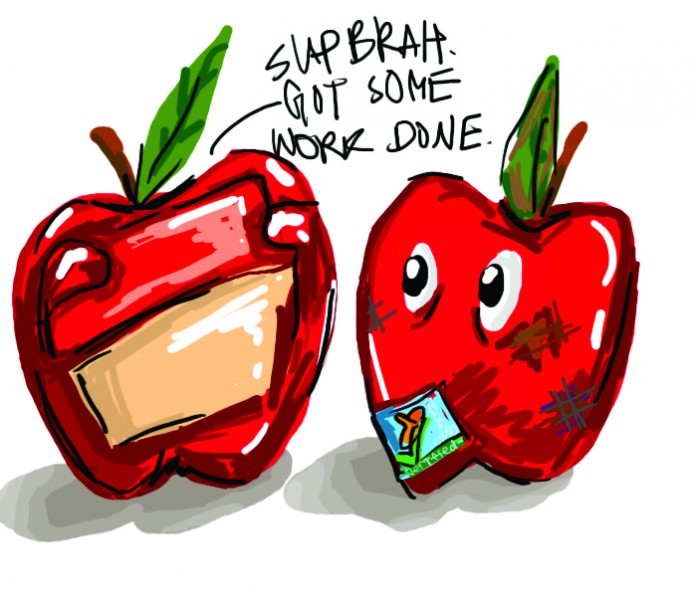 If you’ve ever been annoyed after cutting an apple because it turned brown shortly afterwards, you no longer have to worry, thanks to a company called Okanagan Specialty Fruits.

Okanagan Specialty Fruits has produced a genetically engineered apple that reduces the browning effect after an apple has been cut. These apples do not brown after being sliced because of an enzyme reduction; however, over time the apples will brown, but with a minimized effect.

The United States Department of Agriculture has given the okay for two types of genetically engineered non-browning apples to be sold, according to Melanie Eversley of USA Today. These apples will be produced by Okanagan Specialty Fruits and will be called Arctic Golden and Arctic Granny.

These apples will not be sold right away because there are still product trials and test marketing to be completed, said President Neal Carter of Okanagan Specialty Fruits. By 2017, the apples should be produced and sold in large quantities.

The process for getting approval for these apples has not been an easy one. Big Carrot, a Non-Genetically Modified Organisms Project, attempted to halt the approval for the apples in Canada. Additionally, in a Reddit AMA conducted last week, Carter said that the company also had to overcome regulatory hurdles in the U.S., accomplished with frugal solutions, extended regulatory times, and advice from public and private sectors.

Although Okanagan has dealt with a fair amount of opposition and struggle, Carter is still confident in the product. He says that the anti-GMO crowd doesn’t understand the opportunities that are available.

“We think Arctic apples are amazing, and we have had the chance to play with them for the last 10 years. Now that they are deregulated, we can finally show the consumer how great these apples are, and we are confident they are going to love them.” Carter is not concerned over Arctic apple sales being hurt by opposition from anti-GMO groups and the anti-biotech crowd.

One question that arises is regarding the safety of consuming apples that are genetically engineered. Do we need to be aware of any health concerns that may arise?

“There is no valid scientific evidence that the process used to make the Arctic apple is inherently dangerous. Further, there is no reason to think that reducing the amount of brown pigment in apples presents any health risk,” said UCSB Professor Rolf Christoffersen from the Molecular, Cellular, and Developmental Biology department.

Christoffersen explained that the process of making the Arctic apple is well understood, and this same process is used to make many food products that we eat today. In fact, there can actually be health benefits to eating these apples, especially for people who are allergic to sulfites.

With the concerns over safety resolved, another question comes to mind. What is the purpose of producing these non browning apples? Is this an aesthetic or taste factor?

“People generally avoid eating fruit or vegetables that have turned brown — I think it is a combination of both the look and taste. Although certain tannins are considered a good quality in red wine, we generally do not like the taste of tannins in our fresh fruit,” Christoffersen said.

The Arctic apple has been created not to simply make apples look more aesthetically pleasing after being sliced; they also will help preserve the fresh taste of the apple for a longer period of time.

Today, our world faces a significant challenge with producing an adequate amount of food that can sufficiently nourish the population. Christoffersen sees genetic engineering and biotechnology as possible solutions to address the issues of malnutrition and world hunger. The Arctic apple can make a small yet important contribution to reducing food waste that results from prolonged storage.

“It would be foolish to not use this technology when we are facing this very difficult challenge,” Christoffersen said. Hopefully, these apples and other genetically engineered foods will help reduce the amount of food that goes to waste everyday.