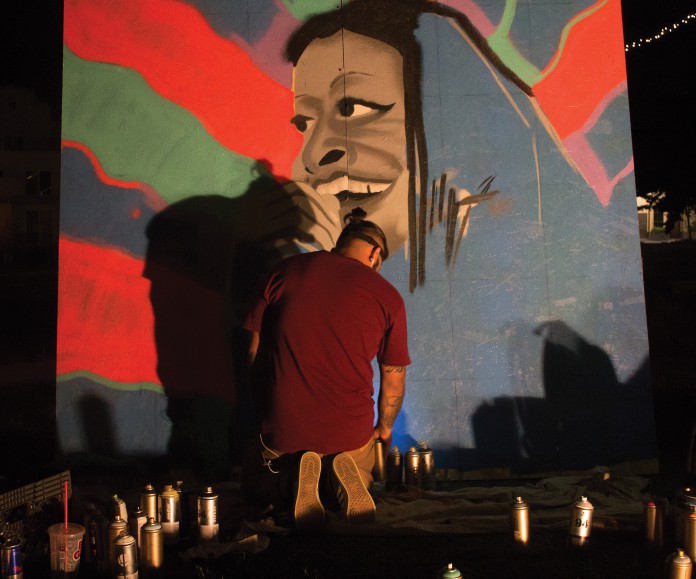 Block Party served as the third in a series of First Friday events held in Isla Vista. The most recent First Friday was held on Dec. 5 and was sponsored by IV Open Lab, IV Parks and Recreation, and the Excursion Club.

“Womyn’s Commission wanted to create a social space that was not predatory, appropriative, or alienating,” said Cassie Rubio, Co-Chair of Womyn’s Commission and a third-year comparative literature and global studies double major.

“We still wanted everyone to have fun but feel safe and welcomed at the same time,” said Danielle Maldonado, also a co-chair of Womyn’s Commission and third-year comparative literature and global studies double major.  “It was also really important to empower women, especially women of color, at our event. UCSB/IV has a diverse community but you often only see one portion of that population represented.”

“This event was created to showcase the talented female performers we have here in IV… Isla Vista desperately needs more spaces for female performers and artists who have a strong voice and vision,” said Rubio. “The most rewarding part of the event for me was watching the camaraderie between the female performers and DJs. Although they had never met each other prior to the event, it was a joy to watch them introduce themselves to each other, swap stage tips/experiences, and share future project ideas.”

“Half of our performers were booked because of word of mouth from students who had talented friends that would fit the venue’s mission,” Rubio said, indicating the events’ success in supporting local talent. “It was a privilege to be surrounded by so much talent and community for an entire night.”

Beyond musical performances, there were many things to keep event attendees entertained. An artists sponsored by Gusto Supply Company put on a live graffiti art show while the company sold its apparel. There was also a performance by UCSBreakin’ and a DJ set put on by Radio Xicana.

“The most rewarding part for me was creating an inviting and warm atmosphere that lifted up groups of people usually pushed to the background,” said Maldonado. “I saw people meeting each other for the first time and forming community–enjoying the music together, dancing, eating and having fun.”

Event attendees were also able to enjoy a hot chocolate station and free photo booth that was provided. Food trucks were also present, as well as a table full of publications provided by community activists. Beginning at 12 AM, in order to comply with Isla Vista’s noise ordinances, there was a silent disco put on by event organizers.

“We worked on this event during fall quarter and over winter break and I’m extremely proud of all the hard work Womyn’s Commission put into this,” Maldonado said.