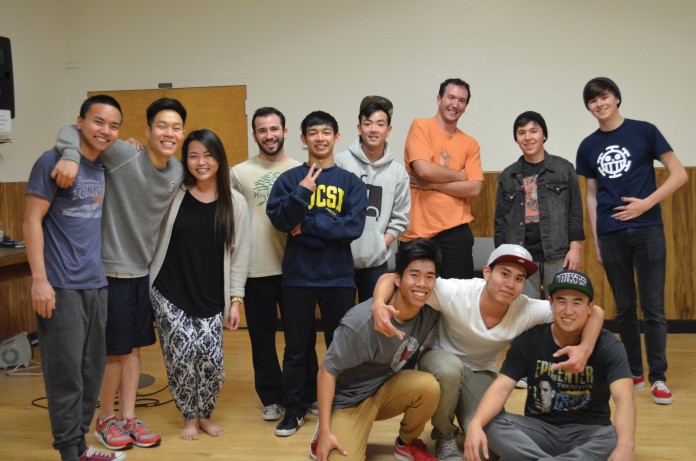 Perhaps you’ve seen them breakdancing at parties, on campus, or at the gym—and if you haven’t, you’re missing out. UCSBreakin’, a unique breakdancing organization, is the University of California, Santa Barbara’s first and official b-boy and b-girl club. This group includes students from both UCSB and Santa Barbara Community College and welcomes dancers of all levels of experience.

“It doesn’t matter what school you attend or what ethnicity you are—it only matters if you dance,” said Haniel Chang, a third-year engineering student at SBCC who has been breaking for five years. “If you have the passion, you are welcome.”

On Thursday, Jan. 22, the group definitely created this friendly, cheerful atmosphere during their open breakdancing session, practice, and tryouts at Robertson Gymnasium. This session was special to watch because the organization was picking members to represent the group for Schools for Fools, a cutthroat intercollegiate battle held annually at Loyola Marymount University since 2006. There was a sense of competition between the members as they tried to gain the most points in order to be selected to participate in in the upcoming March battle.

Vice President of UCSBreakin’, Alick Xu, a fourth-year computer science major at UCSB, served as one of the judges to pick the squad for Schools for Fools. He said that when he was judging, he was looking to see if dancers had originality and passion. Xu also explained that he could sense how much a dancer wanted to be a part of the Schools for Fools squad.

“Obviously, if you mess up, that’s docked points, but if I can see how badly you want it, and you dance the way you want to, not how someone else things you should dance, then I will think that—in that particular moment—you are the best dancer,” said Xu.

During the battles, the members cheered for and often high-fived one another, or could be seen with smiles on their faces. Their energetic mood resonated throughout the room and soon became infectious. Many pats on the backs and “good jobs” were exchanged between dancers during and after performances.

Xu described the group and its members as passionate, friendly, fun, and a tad bit silly. The group seemed to be tight-knit and well-bonded with one another, but they also made it a point to include everyone by introducing themselves to newcomers.

According to President Andrew Chang, a third-year economic accounting major at UCSB, UCSBreakin’ is preparing for another upcoming event that takes place during spring quarter. This breaking competition has been hosted by UCSbreakin’ at the Student Resource Building on campus for the past two years, and the date has yet to be determined.

Chang, who has been breaking for four and a half years, said he met a lot of his close friends through the club and that he has also found that he can express himself through breaking.

“You get a whole aspect of freedom because it is your dance, and it’s something that you create on your own,” said Chang. He further described how breaking requires athleticism and artistic ability at the same time, because there are no pre-choreographed moves.

UCSBreakin’ has official sessions every Thursday and Sunday with an “open door policy,” where new members are encouraged to attend and join the group. The group also has unofficial sessions that may be posted on Facebook where a member can invite others to join.

Check out their Facebook page, where you can find their session information, upcoming events, and unofficial sessions. Don’t forget to also be on the lookout for the breaking competition this spring quarter at the SRB.