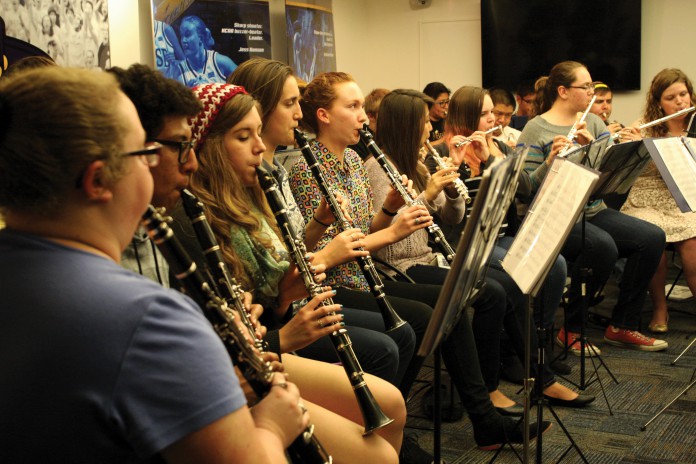 Just like every other Wednesday, the University of California, Santa Barbara pep band held their weekly rehearsal, conducted by fourth-year history major Charles Cummins, at a room in the Thunderdome. A band of 20 students performed a seemingly endless set of varied music, ranging from pop music to “oldies but goodies” throughout the night. It was easy to catch a glimpse of the energy that empowers our athletes and honors the spirt of our school.

According to co-president Emma Manley, a fourth-year film and media studies major, the band dedicates a lot of time and effort in maintaining not only the peppy attitude of the band, but also the reputation of UCSB athletics.

At every home soccer and basketball game, it is hard to miss the spirit upheld by the UCSB’s pep band cheering on our school. UCSB’s pep band started in 1998 as a student-run organization with a jumble of 10 to 12 people. Today, the club has grown double in size and plays a diverse group of instruments, ranging from xylophones that fit on the lap to a matte black tuba that proudly displays the word “Gauchos” on its horn. Through every song, these artists sway their body to the beat of the songs; some tap their feet, others bob their heads and sway their body to the melody.

During this dress rehearsal, after a 15-minute break, the band opened up with a fanfare called “The Middle,” by Jimmy Eat World. Full of fun and excitement, their performance is electric. Afterwards they transitioned into a song completely opposite of the first; it is intense and fierce, and the roar of competition and pressure is prevalent as the drumbeat pounds on and on. The next two songs are more familiar: Lady Gaga’s “Just Dance” and Kelly Clarkson’s “Since U Been Gone.”

As the rehearsal came to a close, the band suddenly raced up to the center of the room, got on their knees, and broke out into a serenade. With smiles and waving hands, they played Righteous Brother’s “You’ve Lost That Lovin’ Feelin'” with passion and exhilaration. This is one of the pep band’s longest traditions, as they frequently serenade longtime fans of both the band and the UCSB athletic team, friends, and even parents who are seen dancing to the music with their children.

Third-year environmental science major Sarah Lloyd summarized pep band, saying that “[we] come in, set our stands and chairs, get out our instruments, play some lovely tunes, have a good laugh, socialize, meet new people, and lots of laughter.”

The 15-minute break was not the only time all the band members shared numerous jokes and laughs. The rehearsal was filled with bursts of energy throughout the songs and enthusiasm that emanated through the night.

The beauty of pep band, according to fourth-year aquatic biology major and clarinet player Rebecca Howard, is the opportunity to be able to play music with people without having the intentions of making a career out of it. Pep band is a space where people can make different experiences. Manley said that she made some of her best friends in pep band while “screaming our heads off cheering for the teams.”

What the club appreciates the most about the games is the amount of support that they garner from fans and audiences. Manley recounts how some audiences have witnessed the growth and improvement of the band throughout the years, and in fact, many people go out to either thank the band or compliment them on their performances. After all, the pep band is composed of students who have internships, jobs, and academics to focus on outside of the band.

Howard describes pep band as “one of the best study breaks.” Cummins said, “[Pep band] is a good way to unwind from a stressful scholastic endeavor career.”

Amidst the numerous nights of performing at cold soccer games at Harder Stadium or stuffy basketball games at the Thunderdome, third-year environmental science major Sarah Lloyd has one simple request: she says, “Come and say hi and clap for us.”