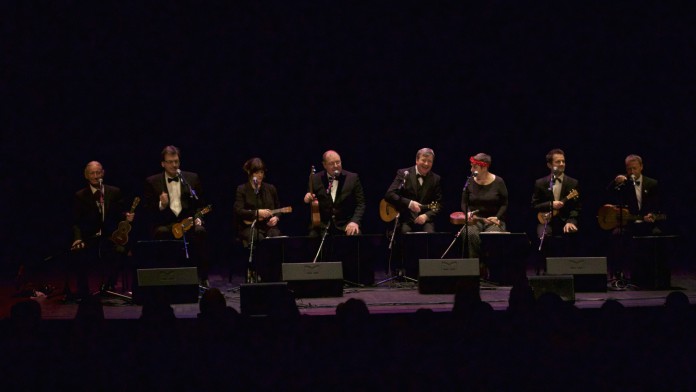 Nearly all 860 seats in Campbell Hall were filled last Tuesday, Jan. 20, by audience members eagerly awaiting the return of the Ukulele Orchestra of Great Britain. The turnout made sense after the performance had concluded, as it proved to be one of the most enjoyable concerts this observer has ever attended. The 30 year-old group has graced our Campbell Hall once before, and audiences were so blown away that they were enthusiastically invited back. Member George Hinchliffe set the tone for the performance with his opening line, “It is said that an artist will play any given venue twice in their career—once on the way up and once on the way down.” This brought the first of many uproarious laughs from the audience during what proved to be a hilarious performance combined with virtuosic mastery of the ukulele.
The range that these skilled musicians achieve on such tiny instruments is astounding. This orchestra brought a novel approach to a wide array of songs ranging from Dolly Parton’s “Joshua” to the disco classic “Carwash.” Their soulful rendition of “I Heard it Through the Grapevine” was beautiful, subdued, and arguably the best I’ve ever heard. There was something almost haunting about their choral approach to it. In a surprising turn of events, at one point they went from performing a German classical song to Lady Gaga’s “Born this Way” that proved surprisingly endearing.

To spice things up halfway through the performance, they brought out what had to have been the smallest ukulele in existence. George Hinchliffe was instructed to “pluck a hot solo on this one with his sausage fingers,” at which point the band went on to play Robert Johnson’s “They’re Red Hot.” Surprisingly, an even smaller ukulele was brought out later that looked more like a key chain ornament than an instrument, but nevertheless produced beautiful music in the hands of a skilled musician. The audience was then promised a “bad salad,” or a sad ballad, and was told that perhaps we could cheer ourselves up throughout the ballad by clapping. A familiar beat started and laughter erupted as the audience realized they were playing “Happy” by Pharrell Williams. They managed to turn a played out, and at this point obnoxious, song into a fun experience for everyone in the room.

In their closing, Leisa Rea informed the audience that they had time for only one more song. In response to the “No!”s that rang out in protest she retorted, “No, I’m sorry, we will have to play it,” which elicited another round of laughter.

The performance was incredibly fun, and I found that each time I looked away from the stage, I couldn’t shake the smile from my face. The witty banter between the members of the orchestra brought a life to the performance that I was not expecting, and I have already found myself listening to their renditions of certain songs once again on YouTube because I simply like them better than the original and can’t get them out of my head. For anyone who missed the show, do not fret. The orchestra has promised to return, and I highly recommend you snatch up a ticket to the Ukulele Orchestra of Great Britain for a must-see performance.