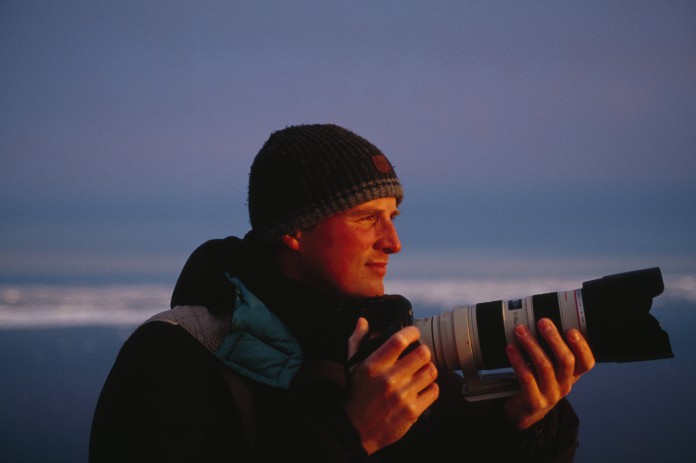 “I’m so happy to see it packed; I was told it might not be packed because you’ve been braving some tropical winter storms,” joked decorated National Geographic photojournalist and marine biologist Paul Nicklen with the audience in Campbell Hall on Sunday, Jan. 11. Entitled “Spirit of the Wild,” the event was the third part of four National Geographic Live series put on by Arts & Lectures and sponsored in part by Shiela and Michael Bonsignore.

Nicklen launched into anecdotes of encounters with incredible animals such as narwhals, beluga whales, polar bears, leopard seals, and emperor penguins while displaying breathtaking photographs that captivated the audience. “The ice and snow were my sandbox; the Inuit were my teachers,” he explains of his childhood in a small Innuit Community in British Columbia. “Negative 45 degrees Celsius with 60/70 mph winds. This is my comfort zone; this is where I’m happy.”

Nicklen impressed the audience with many awe-inspiring stories of his calm interactions with the wilderness and then delved into the one encounter he said he would never forget: spending time with a leopard seal. He acknowledged the bad reputation and terror of the animal that “eats Happy Feet” and has “black soulless eyes and a wry smile like it knows something.” It was his desire to give every animal a fair shake that placed him in Antarctica, right next to a leopard seal feeding on emperor penguins. Before he got into freezing water that was so cold he had to keep checking that his numb fingers were pressing down on the shutter release, his captain gave him some words of advice: “if you get scared, you close your eyes and she’ll go away, eh.”

“I got into the water and she dropped her penguin and rushed over to me right away,” Nicklen tells the audience, who were already riveted by the photo of a seal ripping apart a penguin on display. He immediately describes how he looked straight down the seal’s throat and clicked away, keeping still, until she left to grab a penguin. “She lined it right up with me and let it go, then caught it again and repeated the process, and I’m thinking she is trying to feed me this penguin. Now I’m not taking the penguin so she flips upside down and bobs slowly to me until the penguin is really close and lets it go.”

The seal attempted a variety of ways to force the large useless predator she saw in her feeding ground to eat to no avail. “At one point I had five dead penguins floating around me but I just really did not want a dead penguin. She was giving me this dejected look, trying to get me to eat. Finally she gets so frustrated she flops one onto my head, and I’m just giggling and clicking away absolutely overjoyed.”

He explains his deep love for creatures such as the leopard seal, emperor penguins, and polar pears, and that ice is like soil in a garden; the vast ecosystem he photographs so brilliantly cannot survive without it. After obtaining a B.S. in marine biology, he focused on the polar bears and wrote articles for National Geographic, but he said he was frustrated when his data was shut down by politicians and was unable to bridge the gap between the scientists and the public. Shifting to photography, Nicklen saw the power of creating an emotional connection between people and the polar landscapes, and he found that he was able to provide the visual proof of the melting ice caps many people demanded. The photographs have to be arresting enough to stop a reader long enough to look at the story.

“As a photographer, as a journalist, as a conservationist, I’m always trying to reach people,” Nicklen said. “If I’m out there shoulder to shoulder with a bunch of other photographers, I know I’m not in the right place. When I’m out there all alone, and I am responsible for my own life, I know I’m being effective and getting shots no one else has.”

Nicklen urged the audience to drop the attitudes “Not In My Backyard” (NIMBY) and “Somebody Else is Likely Going To Fix It Eh” (SELFIE). He explained that these acronyms, the latter invented by his partner and him, aren’t acceptable attitudes; everyone needs to engage in the issue of climate change and work to create the change he pursues to inspire every day with his amazing photography.

“We have to get informed and involved. Get rid of NIMBY and SELFIE. For ten years I used to spend all my time convincing people about climate change. Now everyone is starting to get it. We need to get it faster,” Nicklen said. “Because I don’t want to live in a world without polar bears.”

Follow him on social media or check out the amazing photography from the lecture at: http://www.paulnicklen.com. The final installment of the National Geographic Live series will wrap up on Sunday, March 1, with photographer and filmmaker Carsten Peter.