On the wet and cloudy afternoon of Saturday, Jan. 10, music lovers of all ages gathered for the sweet sounds of an acoustic “Nature Show.” Put on by Isla Vista’s own cooperative house BIKO, the event initially strived to combine the art of music with the natural beauty of Goleta’s Coronado Butterfly Preserve and Ellwood Bluffs. However, the downpour of rain caused for a last minute change in location to the BIKO garage. The Sueño Co-Op welcomed students, residents, young children, and even dogs into their safe space to enjoy performances by local musicians, including bands touring from afar.

“I wanted to see the butterflies, but the show is still cool,” said Brenda Morales, a third-year art and psychology double major. She added, “At least they didn’t cancel it.”

Beyond the picket fence and passed the orange and blue trimmed house, the performances took place outback in the garage-turned-small-venue. Inside of the brightly painted garage, inspirational quotes and different pieces of artwork filled the walls; self-expression radiated through the room.

Participants gathered inside the confined walls of the small room to enjoy the music. Dressed in their warmest attire of hoodies, scarves, and boots, people swayed and bobbed their heads to the rhythm of each song, some with warm beverages in hand.

After the rain had settled a bit, everyone stepped right out of the garage and formed a semicircle around the singer Katie Murray. The Santa Barbara based artist took advantage of the dry time and made a good effort to still make it a nature show by taking the scene outside for a short while. The singer serenaded everyone out in the fresh air with the simple instruments of her angelic voice and acoustic guitar.

In between each set, everyone dispersed throughout the property and conversed with one another in anticipation of the next performance. Once it was time, musicians and audience members all squeezed back into the tiny garage to enjoy the intimate performance of Stephen Steinbrink, a touring performer from Olympia, Wash. The 26 year-old put on a beautiful set as the relaxing sounds of his acoustic melodies matched the ambiance of the dim room and gray cloudy skies outside.

Fourth-year CCS literature student Madison Tang, who was also one of the performers, said that the show was completely acoustic, perfect for a rainy day. “It’s nice to play an all acoustic show in the day time that is all ages,” she said. “It’s also nice to be around a substance free environment.”

The show also included performances by artists such as Moonwatcher, Honey Maid, Hot Compost, Oree Oldsmobile, and Otis, as well as readings by Chase Kamp. There was even a small table where some of the artists sold their own CD’s and vinyls, or had flyers available promoting future performances and shows.

Despite the unfortunate unpredictable weather, “Nature Show” was a wonderful success even in its substitute BIKO location. Locals were still able to keep cozy and listen to cool jams right here in IV. In the near future springtime, there is hope for another attempt at a nature show out its original location.

“I thought [the show] was really nice. I was just sad that we got rained out on and couldn’t go to the butterfly preserve and the bluffs,” said Josh Redman, a University of California, Santa Barbara alumni and “Nature Show” organizer. Although nothing is set for sure yet, he said, “We’ll probably try again in the Spring.”

Love in the Time of COVID-19 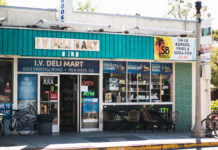