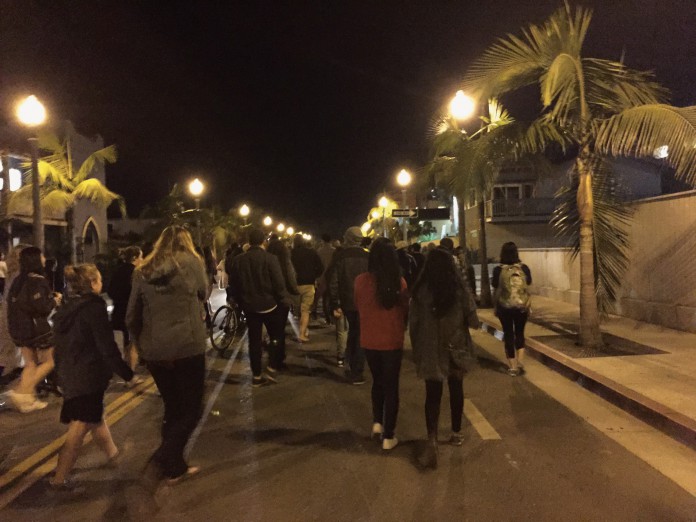 Over 200 students gathered on Jan. 16 in Isla Vista at 10 PM to march down Del Playa and raise awareness about rape culture in the community. With signs that read “Women and Men Together” and “End Rape Culture,” the group gathered at Little Acorn Park and made its way down DP.

University of California, Santa Barbara sociology professor Kum-Kum Bhavnani and four of her Introduction to Women, Culture, and Development (SOC156A) students organized the march, which began to form last quarter.

Fourth-year sociology major and march organizer Audrey Westerlund said the idea for the event sprang up during a dinner with Professor Bhavnani and several of her classmates while discussing problems in IV.

“Immediately the first thing that we all brought up, especially since it was all women at the dinner, was rape culture in Isla Vista,” Westerlund said. “In some way or another each and every one of us at the dinner had experienced it. We talked a little more and decided to do something about it.”

At the event, small cards that read “No excuses for rape. End rape culture,” were distributed among the participants to use as a form of communication if questions from bystanders arose.

“I think it’s fantastic that the women students are leading the way in Isla Vista,” Professor Bhavnani said. “What they’ve said to me is that they want to end rape culture and I think one of the ways to do it is for the women themselves to say what they want.”

According to Professor Bhavnani, rape culture is difficult to define.

While marching down DP, the students were accompanied by loud cheers and claps of applause by bystanders. At several instances, bystanders joined the march and began to walk alongside the original participants.

Third-year global and international studies major Claire Breen stated that she thought participating in the march was a step towards change.

“I think the march was extremely important because currently in Isla Vista and basically every college campus in the United States right now, rape culture is extremely prevalent and it’s something that we’re still fighting against,” Breen said.

Alluding to the controversial Rolling Stone article “A Rape on Campus,” Breen voiced her frustration of how rape cases are treated.

“I think that’s very indicative of the type of society that we’re living in now,” Breen said. “We’re still in this world where we’re still saying that the survivor’s story isn’t true or that it’s problematic.”

Chants like “We will not be silenced. Stop the violence,” and “What do we want? End rape culture. When do we want it? Now,” were recited by the crowd.

Kai Harper, Assistant Resident Director of Manzanita Village, thought that the march was a powerful and much needed statement for the community as a whole.

“The school has gone through a lot of things recently that have shown that there’s a huge need to bring about awareness of rape culture and ultimately end it,” Harper said. “I think this is a good part of the process. It’s not enough obviously just to have this. It needs to be everything, it needs to be the school, the administration, the students themselves standing up and making a change.”

Third-year sociology major and an organizer of the event Zoe Monty-Montalvo stated that she hopes the biggest thing people take away from this march is the realization that women and men need to work together in order to end rape culture.

“To address rape culture and confront it, it takes both men and women to do so,” Monty-Montalvo said. “Both sexes have to work together to come to a solution.”

Indeed, the march consisted of both men and women walking together down DP. Lasting approximately 40 minutes, the march faced no opposition. Instead, balconies full of people gave their thumbs up in support of the rally.

“I want people to say, ‘This is great, people are doing something about it,’” Westerlund said. “I’m grateful for the comfortable environment that professor Bhavnani provided for us that allowed something like this to happen.”

First-year biology major Courtney Welsh believes this march will help break down barriers and ease conversation on the topic of rape culture.

“It’s definitely something that people all know about but something that we don’t talk about enough,” Welsh said. “I think that it’s important that we raise awareness and make it more of a comfortable thing to talk about.”

At the end of the march, back at Little Acorn Park, third-year sociology major and event organizer Diana Figueroa thanked everybody for participating.