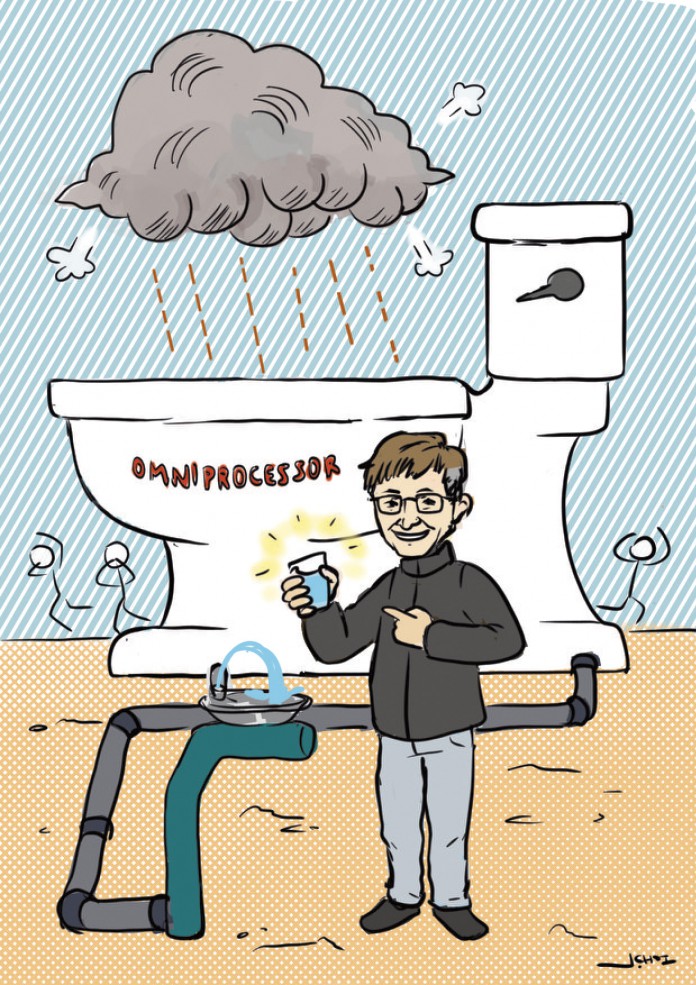 Janicki Industries, an engineering company based in Washington, has developed a machine that turns sewer sludge into safe drinking water within minutes. Their resulting project, called an Omniprocessor, is being funded by the Bill and Melinda Gates Foundation.

Gates drank the ingeniously-filtered water on a trip to the plant in November. “The water tasted as good as any I’ve had out of a bottle,” he wrote on his blog, “And having studied the engineering behind it, I would happily drink it every day. It’s that safe.”

The purpose of the machine is to help the 783 million people without access to clean water and the 2.5 billion people worldwide lacking clean sanitation.

“You go into a community and you open the tap. What comes from this is even worse than [the water] you get from the roof when it’s raining,” says Doulaye Kone, senior program officer at the foundation.

The Omniprocessor works by feeding sewer water into the machine, where it is boiled and divided into dry waste and water vapor. The dry waste is burned at an extremely high temperature, which drives the steam engine that powers the machine’s generator. The remaining electricity not used to power the machine is delivered to the local communities. The water vapor boiled off the sludge goes through a filtration process, and condenses to form clean drinking water.

“The processor wouldn’t just keep human waste out of the drinking water; it would turn waste into a commodity with real value in the marketplace,” Gates writes on his blog.

“One machine is designed to continually provide water for up to 100,000 people,” says Kone. It will produce up to 86,000 liters of potable water a day and a net 250 kilowatts of electricity.

This machine will not only provide a clean resource for safe drinking water and cleaner sewage disposal, but will also generate electricity that can be delivered to local communities. “Through the ingenious use of a steam engine, it produces more than enough energy to burn the next batch of waste. In other words, it powers itself, with electricity to spare,” Gates writes.

The prototype will remain in Washington, but the first Omniprocessor outside of the U.S. is to be tested in Dakar, Senegal in late 2015. “[In Senegal, Janicki will] study everything from how you connect with the local community (the team is already working with leaders there) to how you pick the most convenient location,” Gates writes.

“You have additional treatment steps here in California—microfiltration, reverse osmosis, and ultra-violet light disinfection. When you go through all that, the water is essentially safe to drink,” says Dr. Dick Luthy, an environmental engineer at Stanford University and director of the National Science Foundation’s Center on Re-Inventing the Nation’s Urban Water Infrastructure.

The difference is that the cleaned sewage water doesn’t go directly back into our water supply, it goes back to the ground, where is pumped back out several months later.

“What it does in the ground is that it sort of loses its identity,” Luthy says. “It stays in the ground and mixes with ground water for a few months—maybe six—before it’s pumped out.”

“People die in hospitals [in lower-income countries] simply because there’s no water running into the tap,” Kone says. “Can this be an opportunity to supply the hospitals with clean water for basic [services] or for school where kids don’t have any water to drink during the day?”

“It’s the ultimate example of that old expression: one man’s trash is another man’s treasure,” Gates writes.