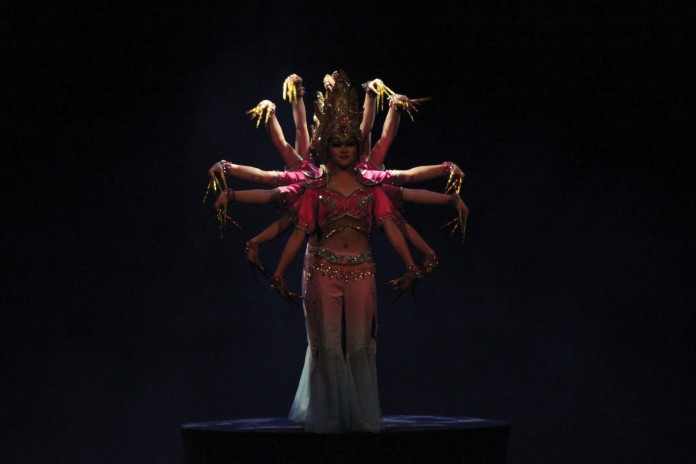 The courtyard of Campbell Hall on Saturday, Jan. 24, buzzed with the excitement of children who had come to see “Cirque Zíva,” a show presented by University of California, Santa Barbara’s Art & Lectures as part of their Family Fun program. Cirque Zíva has come around to UCSB before, delighting parents, children, and students every time. The act featured the Golden Dragon Acrobats, who had just finished touring Broadway.

“This is my favorite one by far,” said Amy Findley, a member of the Santa Barbara community. She said she has a season pass and brings her daughter to as many shows she can. “It was just absolutely amazing.”

The show itself was an ethereal experience, and although the hyper children outside were screaming, yelling, getting free face painting, and playing with the complimentary balloon animals, once they were seated inside and the show began, a hush fell over them. The Cirque Zíva show transitioned from a mystic, hypnotic tone to a vibrant, colorful one, ending with a finale that stunned and captivated its viewers.

The first few acts included soft, muted music and left the children in almost a trance. It included a woman carried onto the stage by a group of mysterious hooded figures while she held a set of crystal glasses, and as she came out, the children gasped in glee. Dressed in purple, she balanced the set of crystal glasses on her foot and raised them up 180 degrees. The children hollered in surprise and clapped, some even hopping to their feet. One child was heard exclaiming, “Wow, that’s glass, she must be so brave!” Throughout the act, the crystals she balanced shone in the spotlight, and it seemed like the entire audience was transfixed by her grace.

The energy of the hall began to accumulate and the show continued its acrobatics. A man dressed in flowing white trousers came out on stage. When the acrobat balanced himself on one arm, there was visible strain on his body, and his effort and strength left the audience in awe.

The transition to a livelier and brighter show was marked by acts such as acrobatics and juggling, done by performers riding minuscule unicycles. Four men in robes of red, gold, and purple rode out, and the children, as well as adults, cheered and laughed as the music turned much more upbeat, even featuring a pop song or two.

This playful part of the show also featured an acrobat laying on her back. With her legs, she balanced a tall pole with step like platforms leading to a basketball hoop, and with expertise balance, she managed to get a shiny gold ball up the platforms and into the hoop. She missed the first attempt and was immediately met with chants of “Try again!” and “You can do it!” by some of the children in the audience and even some parents. She made it her second attempt and was met with roaring cheers.

However, the highlight of the show was its final act before the finale. A stand was lowered down to the floor, and what followed was a feat of acrobatics, strength, and balance that was almost otherworldly. Baca, a six year-old with a rainbow painted on her cheek, said with joy, “I was so excited at the last act. I thought it was dangerous, but it was cool!”

About six or seven chairs were stacked in an alternating pattern so that they added height to the tower. With great power and equilibrium, an acrobat adorned in gold and purple balanced himself upside down from the highest chair. It seemed like the tips of his toes were only a couple feet from grazing the ceiling of Campbell Hall. Eventually, he balanced himself with just one hand and everyone went wild with cheering, and a few parents and children gave the acrobat a standing ovation.

The show closed out with a finale of color, vibrancy, and playfulness. Before taking a bow, the gold- and red-robed Golden Dragon Acrobats performed a few more feats of acrobatics on the floor and up in the air. Cirque Zíva ended with a standing ovation by all, and it was clear that although children made up a large part of the audience, parents and students were just as mesmerized by the skills the Golden Dragon Acrobats performed that day.