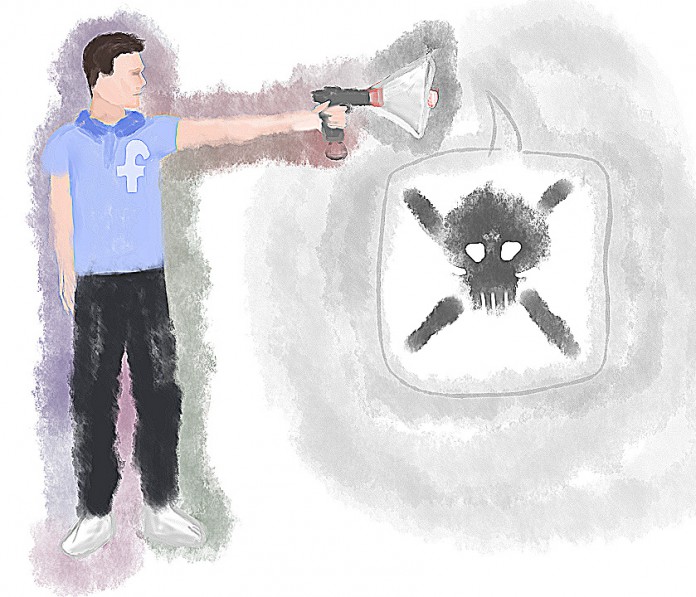 Social media has brought about its fair share of benefits, all of which are worthy of recognition. The phenomenon that’s resulted from it—the shared experience of being connected to the world at all times—cannot be understated. As we give more and more consent to its ever-growing presence in our lives, however, we need to take caution in putting faith into what it gives back to us. On Saturday Jan 17. talks of a potential shooter in Isla Vista spread like wildfire throughout campus. While the rumors turned out to be false, the nascent signs of panic that came out of the hoax are clear indicators that social media is far from being a reliable source of news and information in potentially dangerous situations.

The shooting hoax originated and was then widely perpetuated on Yik-Yak, where many students at University of California, Santa Barbara typically read topical punchlines and anonymous gripes around campus. If that were the only reason the app is used, there’d be no reason to speak of it. However, its effect around Isla Vista on Saturday night was alarming—rumors and exaggerations flew left and right, and what began as a simple police investigation turned into talks of an actual shooter who was live and roaming Isla Vista. While the police were able to successfully kill the panic prematurely by confirming to our school’s news sources that there was no immediate threat, the hysteria that this chain of misinformation may have caused demands our attention.

While alerting people to a potential threat is of paramount importance, it needs to arrive in the form of a streamlined, reasoned report. It certainly can’t come at the hands of anonymous sources on Yik-Yak, where even the edgy stories usually have little credibility, let alone news about developing stories. Of course, it’s ludicrous to suggest that we censor these messages. Rather, the responsibility falls into the hands of our students to approach stories like this with a great deal of skepticism. Until the school or the police or a credible news source tells us otherwise, it’s unwise to go any further than taking caution when seeing such threats, and it’s downright hazardous to spread them around recklessly, potentially distorting the truth in the process.

Some could argue that it’s a dangerous wager to distrust such a quick and convenient source of information as social media. After all, reading a post that alerts us to situations may very well save our skins. This is not untrue, but speculation is not—and should not—be treated as a legitimate resort in a situation like the one that Saturday. Consider the Boston Marathon bombings in 2013: as panic spread in the direct aftermath of the tragedy, many took to the news and content aggregate website Reddit to discuss and speculate on the events. All it took was a suggestion that the person responsible for the terrorist attacks was a missing student at Brown University, and within hours the Reddit community had essentially convicted the student—who eventually was found to be completely unrelated to the attacks—and the members were congratulating themselves. Seeing how the rumors that Saturday swelled to a brief mania over a shooter who didn’t exist leads one to question whether a witch-hunt for a possible shooter would have been the logical next step.

The university, in the wake of these issues, needs to take the incident that occurred on Saturday as a precedent for future crises that might emerge. University announcements, which were surprisingly nowhere to be found that night, need to be frequent and easily accessible; a more reliable, informative mobile app that works as an alert system would be worth considering. There is no time to argue over trying not to alarm students with unconfirmed reports. Information will get out and around, whether the police confirm it or not. It’s up to the university to be able to regulate it and make it possible for students to get their information more quickly and more accurately. In the meantime, it’s up to us students to be able to reason, as well as realize that our response to the information we receive is our only method of control over events like the one that transpired the other week.