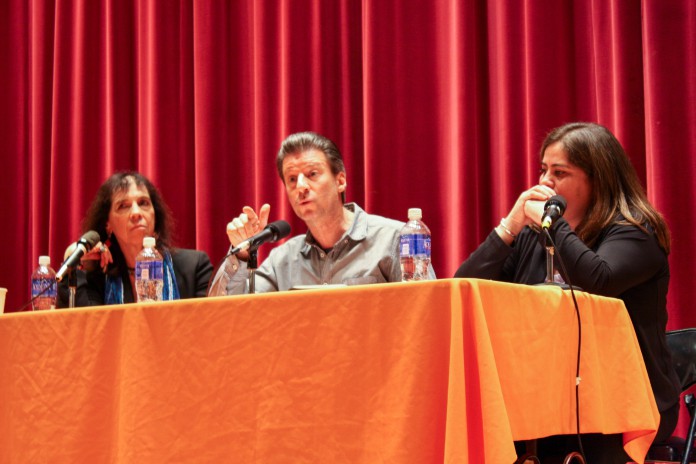 On Sept. 26, 49 male students from a teachers’ college in the rural town of Iguala, Mexico were violently confronted by police and gunmen believed to be affiliated with local cartel groups. Six students were killed at the scene and 43 were kidnapped, presumably murdered. The students were traveling to Iguala in order to protest what they believed were discriminatory hiring practices and advocate for education reform.

The event sent shockwaves throughout Mexico and the international community, including the local community at University of California, Santa Barbara.

In reaction to these tragedies, the UCSB community held a variety of events to mourn the lives lost and raise awareness about the issue. On Nov. 20,  students, student groups, professors, and community members collaborated to organize an action at the Arbor, an information panel, and a candlelight vigil/vigilia. Student activists began the day by marching down the Arbor with posters and symbolically painted faces, calling out the names of the 43 missing students in a roll call.

Many demonstrated their support through their face paint: a vertical white line and a red handprint covering their mouths.

Ariela Ariana, a third-year comparative literature major, explained the significance, stating “the white symbolizes life, the red symbolizes blood, and the hand over the mouth symbolizes the silencing that many face.”

Idalia Robles, a first-year post-doctoral Chican@ studies major, took part in the action and described her involvement on campus, as well as the organization of the protests.

“[It] rose organically when students in El Congresso, professors, and other individuals who had all been discussing ways to bring these issues to light were able to find one another and collaborate,” said Robles.

The organizers not only protested in a high-traffic area in order to raise awareness, but also utilized social media outlets such as Facebook, Twitter, Instagram, and Tumblr through hashtags such as #SBconAyotzinapa, or “SB with Ayotzinapa,” according to Rubio.

Following the action in the Arbor was an information panel, composed of Professor Gabriela Soto Laveaga, Professor Bill Robinson, and lecturer Faviana Hirsch Dubin, which attracted over 150 students, packing the Multicultural Center’s lecture hall and forcing dozens to sit in the aisles.

Professor Laveage, who provided a brief political and historical context for the kidnapping and subsequent movement in Mexico, was inspired by the community efforts at UCSB.

“It’s great to see the students taking this up as a cause,” Laveage said. “Students today are much more aware of what’s going on in societies around the world and not just their own, a lot of which has to do with social media but also an acute awareness of what’s happening around them, allowing them to organize quickly, as seen in the Arab Spring and the Occupy movement.”

This heightened social awareness was echoed by the student participants, who expressed a desire to change the world around them and educate their peers.

Some protesters, like first-year anthropology major Stephanie Rubio, took part in the protests because they “feel passionate about giving the oppressed a voice, whether they are in Mexico, the U.S., the Middle East, or elsewhere.” Others, like second-year math major Alonso Martinez, wanted to “educate themselves and others about the issue because we have the privilege of being able to protest without fear of violence or death.”

The final event of the day was the candlelight vigil/vigilia at the Goleta Community Center, which aimed to “serve as a safe environment for community members to express themselves, unite together, and commemorate their ancestors,” according Rubio.

Many participants in the days events, such as a third-year post-doctoral Chican@ studies major Rosie Bermudez, expressed a desire to act following the events in Ayotzinapa.

“[We] are outraged and want others to be outraged, and know that we are in solidarity with all the people in Mexico and around the world who are being oppressed,” said Bermudez.