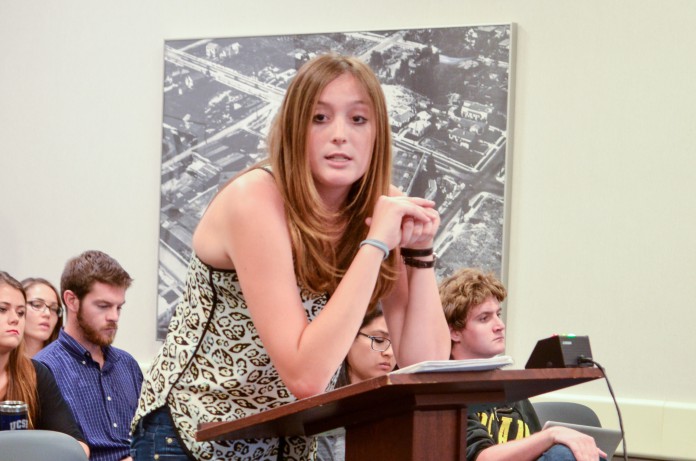 The bill proposes that the OSA “shall have a thorough knowledge and understanding of all student issues pertaining to University policy and shall serve to advocate for the right of all students on a campus-wide level,” and the SAG will no longer conduct individual casework for students’ personal issues. Instead, the bill proposes that there shall be a unit within the OSA dedicated to meeting with individual students, in order for the SAG to be able to focus on advocating for the student body as a whole.

Loverin expressed her disagreement with the bill during public forum.

“I think that is a huge failure when you are going to write a bill that completely changes the structure of an office that you have never, ever worked in, and none of you sitting here have never once served in the Office of the Student Advocate,” said Loverin. “You have never had a student come in to you sobbing and begging for help because they are being harassed or they are being stalked or they are being thrown out of school because someone has accused them of cheating, because they failed that class, because someone in their family died and they need someone to help them.”

Loverin stated that it is “ridiculous” for the bill to even be considered when it is written in the AS Constitution that the SAG “shall be available to provide assistance and support to any undergraduate student and student group involved in disciplinary actions of the University of California, Santa Barbara and be empowered to challenge University policies on their behalf.”

AS President Ali Guthy stated her reasons for supporting the bill during her Executive Officer Report.

“No other executive officer conducts individual casework,” said Guthy. “You don’t have an individual student coming to my office and saying ‘I have this problem and you need to provide this direct service to me.’ Our work as executives are to advocate for the entire student body as a whole. That is why we are elected by the entire student body: so that we can address these [campus-wide] issues, not case-by-case bases.”

Despite Guthy’s support of the bill, the bill requires the Constitution to be rewritten, and it is illegal to do so without a vote of the entire UCSB student body.

Attorney General Hector Contreras stated that the the passage of the bill as it is currently written is unconstitutional, as it prevents the SAG from providing oversight to their office.

College of Creative Studies senator Liam Stanton expressed his concern with the bill.

“I definitely wouldn’t support it ever, and I think most people, as it’s written, wouldn’t,” said Stanton. “I personally am really offended by the bill…it is unnecessary and, of course, as it is written, blatantly illegal.”

Off-Campus senator Michelle Moreh also disagreed with the bill, stating that she felt that creating a separate advocacy unit would cause the role and duties of the SAG to become obsolete.

The bill was sent to Constitution and Bylaws Committee as well as University Affairs. It is unclear when it will be up for discussion again.