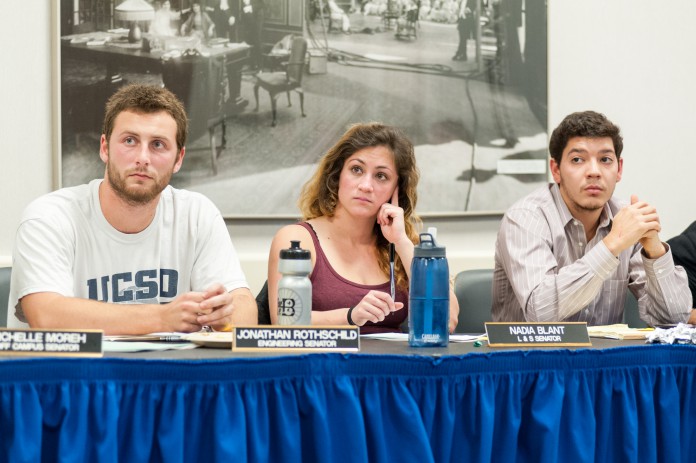 The Associated Students Senate tabled a Resolution to Divest from Gun Industries at their Wednesday, Nov. 19 meeting at the University of California, Santa Barbara.

The resolution, authored by Off-Campus senators Paola de la Cruz and Carlos Lopez, states, “[A]s a public institution of higher learning, the University of California has a responsibility to invest university funds in a socially responsible manner.”

One of the main reasons behind the resolution is that it is a response to the tragic events of May 23.

Bob Weiss, father of Veronica Weiss, was unable to attend the Nov. 19 meeting, though his statement regarding the resolution was read by UCSB student Sydney Chanu.

“‘The agony of losing our daughter is constant and unbearable,’” read Chanu, from Weiss’s statement. “‘As parents of a victim of gun violence murder… it sickens us that the university could be invested in firearm manufacturers… The University of California should act as a leader and ban investments in the gun industry. Me and my wife ask you to divest now.’”

“It’s frankly unimaginable that the Regents, the administration, seems to operate as a black box, and we have no information as to the extent to which we are invested in [these] extremely negative industries and endeavors,” said Campus Democrats President Krishna Hammond, in support of the resolution.

The resolution was tabled for one week after a vote of 12-6-2.

The concert was sponsored by the UCSB DJ Club, who requested $3,000 from the AS Finance and Business Committee in order to fund six buses which would transport students from Isla Vista to Earl Warren Showgrounds, the location of the concert, in order to prevent students from potentially driving while intoxicated.

The DJ Club presented to the AS Finance and Business Committee on Oct. 27 to request funding.

“About two hours after the Finance Board meeting, I ran into the CFO of the Finance Board in the streets near Hana Kitchen,” said DJ Club president Easton Konn. “He told me very clearly that we were approved for funding, and my biggest concern was we had Ticketfly already set up.”

Konn stated that he asked ASFB Chief Financial Officer Andre Theus whether the DJ Club needed to use AS Ticketing when selling their concert tickets. According to Konn, Theus said that it is a “recommendation, [but] it is not required.”

The DJ Club then informed the people who had already purchased their tickets that they would have transportation provided to them. However, on Nov. 16 the club was notified that their funding had been denied, due to the fact that they did not use AS Ticketing to sell the concert tickets.

All clubs and organizations are required to attend a Financial Policies and Procedures Workshop before requesting funding from ASFB, which details the process for funding requests. Included in the information presented during the workshop is the requirement for clubs and organizations to use AS Ticketing when selling event tickets in order to receive funding for the event. Konn stated that though the DJ Club did attend this workshop, he did not remember this requirement.

Several senators disagreed with approving the funding for the buses.

“If they went to the workshop and if they took notes, I’ve seen people take notes [and] write things down, then they would’ve known that this is what they have to do,” said Letters and Science Collegiate Senator Nadia Blant. “At a certain point, people need to be held accountable for their actions.”

Some senators were also hesitant to fund the buses due to the fear of being liable if something were to go wrong. There would be no monitoring of who would be getting on the buses, or if the passengers would be bringing alcohol or narcotics with them.

“These buses go every week from here to downtown and there has never been an issue, so why would we not trust them in the same way for this event?” said Off-Campus senator Casey Firenze. “Andre told Easton that [the club] was fully funded, without saying that this stipulation was his attached, so it’s not really his fault… or anyone’s fault.”

The Senate discussed potentially using Office of Student Life Winter 2015 funds to pay for the buses, but after a vote of 8-10-2, the motion failed. As a result, the buses will cost $10 per ticket holder.