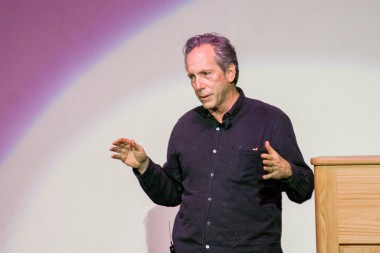 Magic Lantern Films hosted Mitchell Kriegman on Friday, Nov. 7 to give a talk about how to express yourself in television. Kriegman is the creator of popular shows such as Clarissa Explains it All and Bear in the Big Blue House. He has also written for shows such as Rugrats, Saturday Night Live, and Doug. Although that television work may be what he is best known for, Kriegman’s writing is not restricted to television — his new Young Adult novel, Being Audrey Hepburn, was released in September.
When asked how he got into the TV industry, Kriegman said, “I was desperate to express myself.” He started creating content and was eventually recognized by someone who got him into the business. His years of experience and expertise definitely give Kriegman the credibility to give a talk such as the one that he gave Friday night, but there were less people there than one might expect. It is a shame that not more people were there to hear this intelligent and entertaining man give his advice about finding your voice and having confidence in your own work. For anyone interested in the arts, it was a useful and worthwhile event to attend.

The program began with a medley of clips from the various works of Mitchell Kriegman, including some that are not found elsewhere. After the clips, he gave a talk about finding your voice in which he gave the audience his ten “Rules to Live By.” Some that stood out are as follows:

2. Inspiration is overrated. “Don’t depend on it,” said Kriegman, “It’s unreliable. You know, it comes and goes. It’s not something you can always be.”

4. There are no bad ideas. “Of course there are some terrible ideas,” said Kriegman, “but your ideas are not the bad ones.”

7. Define your own victories.

Kriegman’s final rule was to ask yourself what you as an eight year-old would say to you now. The idea is that no matter how much you have done, you have accomplished so much and grown since you were eight. Your eight year-old self would probably see you as the coolest big kid (or adult) ever.

After his talk, there was a Q&A in which students could ask any questions that they wished to ask him. There were several questions about writing and creating that Kriegman answered with several personal stories and knowledgeable advice. The personal touches to his answers made the Q&A feel very intimate and relaxed. Though there were not quite as many people there as there could have been, everyone there seemed genuinely interested in the Mitchell Kriegman and his work, so the environment was friendly.

The last part of the event was a book signing for Being Audrey Hepburn. The books were being sold at the signing, and with the Magic Lantern ticket stub, you could get four dollars off of a copy that Kriegman would personally sign. Many of the people at the event purchased books and several stayed and got to chat with Mitchell Kriegman one-on-one.

When asked what the main point he wanted to get across to the students, he said “for them to feel like they can do it.” He related it to one of his rules, saying that writers and other creative people should not be discouraged by rejection.

While attendance was somewhat lacking, the people that went had an experience that not many can say they have had. Being Audrey Hepburn is in stores now, and if you are a fan of Clarissa, or any of his work, this book is bound to be one you enjoy. “Young Adult is a marketing category, said Kriegman, “older people can read a younger protagonist.” So no matter what age you are, check out his book centered around a young girl who finds herself wearing the famous black dress from Breakfast at Tiffany’s.