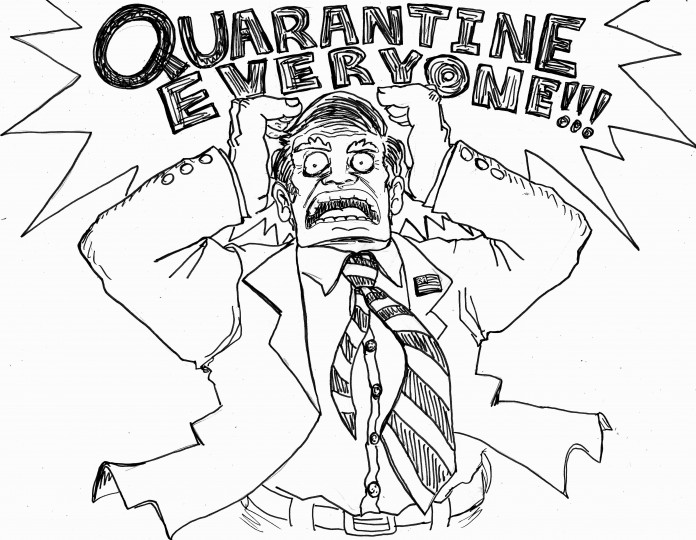 How dramatic is the fear of an Ebola epidemic in the US? The virus has killed four people outside of West Africa since March 2014, with 4,922 deaths in West Africa alone, and mainstream American media has blown the possibility of a US outbreak out of proportion. On Oct. 24, the Governor of New Jersey, Chris Christie, imposed mandatory quarantine on a nurse recently returned from Sierra Leone that same day.

Kaci Hickox, a nurse who worked with Doctors Without Borders in Sierra Leone, returned to the US last week and was immediately put into isolated quarantine in New Jersey. Hickox claimed to have been quarantined in a tent without a shower, in inhumane conditions. Photographs show the nurse behind the plastic window of her tent, surrounded by various medical supplies.

“I understand that she didn’t want to be there. She made that very clear from the beginning,” said Christie. “But my obligation is to all the people of New Jersey, and we’re just going to continue to do that.”

Hickox tested negative for the virus, after spending last weekend in quarantine. After her release, she was allowed to travel back to her home in Maine.

“While we certainly respect the rights of one individual, we must be vigilant in protecting 1.3 million Mainers, as well as anyone who visits,” said Maine Gov. Paul LePage, who attempted to force Hickox to isolate herself for 21 days.

On Oct. 31, a Maine judge ruled that the quarantine was unnecessary towards protecting the state. The night before, the same judge ordered Hickox to stay three feet away from others and avoid public transportation. Despite initial objections, Hickox has agreed to follow a series of daily requirements as ordered by the court.

“The court is fully aware that people are acting out of fear and that this fear is not entirely rational,” the judge wrote. “However, whether that fear is rational or not, it is present and it is real.”

California’s Department of Public Health ordered ‘risk-based quarantines’ on Oct. 30 for those who are returning from West Africa, or have had contact with travelers from West Africa. The quarantine follows Stanford doctor Colin Hicks’ return from Liberia. Hicks immediately put himself in voluntary quarantine for the next 21 days.

Earlier this month, New Hampshire Senate candidate Scott Brown (R) suggested that an outbreak in Central or Southern America, combined with undocumented immigrants coming to the U.S., could spell trouble for the country.

“We have people coming into our country by legal means bringing in diseases and other potential challenges,” said Brown. “Yet we have a border that’s so porous that anyone can walk across it. I think it’s naive to think that people aren’t going to be walking through here who have those types of diseases and/or other types of intent, criminal or terrorist. And yet we do nothing to secure our border.”

Meanwhile, experts are rallying against the nationwide panic regarding Ebola. Many have pointed out that Ebola is only spread through contact with the bodily fluids of a symptomatic person.

“[The hysteria is] just one more thing that’s going to slow down the science and research effort,” said Dr. John Schieffelin, an infectious diseases specialist at Tulane University.

The nationwide panic over Ebola is “an overreaction to perceived risk” and “comes off as a little xenophobic,” Schieffelin concluded.