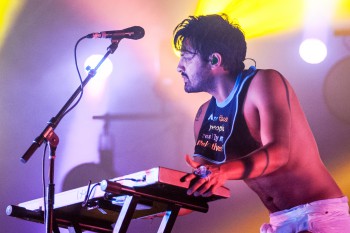 The early part of Halloween night was a bit inconspicuous, as many of the Delirium and Young the Giant concert-goers had to stand in the rain for what seemed like an eternity (which in reality was probably about 10 minutes) before the doors finally opened and the line was let into the “Thunderdoom.” For those that did get there at 8:30 P.M., there were no performers, but there were a few activities, a photo booth, and refreshments.

Once inside, at the “mocktail” bar, you could order drinks such as Bone Juice, Spider Cider, Zombie Tonic, and Batsbrew. Other booths featured tarot card and palm readers, caricature artists, and make-up artists. There was also a chance for students to enter into a drawing for free t-shirts and a free iPad. It was a cute setup, but very reminiscent of a high school dance, and it would have been nice if there was actual food, not just candy.

FMLYBND (pronounced like “family band”), opened for the main attraction, and came on at around 10 P.M. FMLYBND are a local band with an electronic sound that have played across the country, but they returned to their Isla Vista home for this Halloween event. They seemed to be having some technical difficulties at first but went on anyway, and performed admirably. The crowd seemed to enjoy them, and they did a good job getting the crowd hyped up for the main attraction.

Young the Giant came onstage scantily clad in diapers for Halloween. While not quite as local as their opener, Young the Giant are a very good Southern California band, originally hailing from Irvine. Their set was rather long, which was both a good thing and a bad thing. A lot of fan favorites were included, along with a few songs that dragged and were not quite as popular. The standouts were “I Got,” “Cough Syrup,” (which is the song that many students probably went to hear), “Apartment,” “My Body,” and their cover of R. Kelly’s “Ignition.”

Their stage presence was on point, and they played a great set. The lead singer, Sameer Gadhia, was engaging and very talkative with the audience. It did feel as though the set was longer than it should have been at some points, which was probably for the sake of the event, but a little bit more time could have been given to FMLYBND. When Young the Giant played “Cough Syrup,” many of the people who had been sitting in the stands ran down to the main stage to join the crowd. However, their visit to the pit was short-lived, as right when the song ended, many of those people returned to their seats, or left entirely.

Delirium is an event that I can absolutely see happening again next year, but there are some improvements that would make it more appealing. Although they did relatively well with the venue, it could have been a little bit better. The activities that they provided beforehand were cute, but like mentioned before, they seemed very reminiscent of a high school dance. There were also only a few activities to choose from, which made the lines pretty long. If there were more activities or games, more people would have been able to be doing something at once, and the lines would be shorter and move quicker.

For such a lengthy event, it’s also surprising that they did not provide or sell any kind of food. If there was food provided there,  it could have kept people there a lot longer. The event attracted a fair amount of people, but it may have been partially because of the rain, and the dead-ness of I.V. that came with it. Plenty of people were there the entire time, but a lot of people were coming and going, and though there were not as many people out on the streets as usual, this was most likely due to the weather than the event itself.

I thought Delirium was a very cool even that could have attracted a lot more people if it were set up differently. Although it is understandable why they wouldn’t announce it until very close to Halloween, people have often already made plans by then. Maybe because people will know it is happening, that there is a chance, next year, students will be less likely to make plans or invite their friends to Isla Vista for Halloween.

Again, it is understandable why they had to charge to enter the event, and because it was only five dollars, I’m sure many people probably didn’t mind, but when events like Extravaganza are free, it is hard to justify paying to go to something smaller. Perhaps next year there will be more artists performing, which would make the event longer, attract a larger crowd, and provide more entertainment.

Overall, Delirium is a really good idea to keep people from going too crazy in I.V., and I can see it improving a lot in the future. Young the Giant attracted a pretty big crowd, and if they plan for more performances in the future, it is very likely that even more people will attend, and the event will get even better.