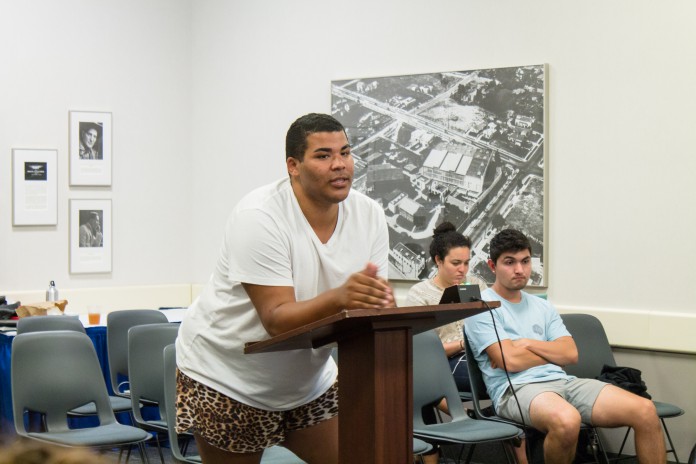 Associated Students External Vice President of Statewide Affairs Melvin Singh refuted a recommendation for the AS Senate to freeze the funding for the Student Commission on Racial Equality during the Nov. 5 meeting of the AS Senate at the University of California, Santa Barbara.

On Nov. 4, after receiving word of the potential freeze, SCORE published a press release entitled “SCORE Autonomy Under Attack by Associated Students, led by EVPSA Melvin Singh” to their Facebook page. The press release was a response to the AS Finance Board request to cease funding SCORE “based on allegations that SCORE violated student government bylaws through their Student of Color Conference delegate selection process, disallowing all accepted delegates from going to SOCC.”

The press release stated that Singh attempted to “take over jurisdiction” of the SOCC delegation as well as freeze SCORE’s funding, which is used to pay for transportation and accommodations at SOCC as well as fund other projects on campus. It then urged SCORE’s supporters to email Singh, as well as attend public forum during the Wednesday meeting of the AS Senate, to voice their concerns.

These allegations of misconduct, according to Singh, were false.

“I don’t want to give them the message that I am taking away their autonomy, but I was a little upset with how things were going,” said Singh, who also stated that his role is to keep communication open between UCSB students and the University of California Student Association.

As the EVPSA, Singh is a UCSA liaison and has the role as the delegation leader for SOCC. According to AS Finance Board Chief Financial Officer Andre Theus, Singh tried to give SCORE their freedom, but was also denied acceptance to attend SOCC with the SCORE-led UCSB delegation.

Singh stated that he and his Chief of Staff Hannah Herrera met with SCORE co-chairs, and were able to convey to SCORE that Singh had nothing to do with the freeze. He recommended that the Senate not ratify the freeze, as he wanted to make sure UCSB students could still attend SOCC.

SCORE later edited their press release, removing all allegations made against Singh and urging SCORE supporters to contact Theus instead.

Like Singh, Theus also recommended that Senate not ratify the freeze. He stated that prior to Singh and Herrera’s meeting with SCORE, he sent the organization an email asking the co-chairs to send the SOCC delegate applications as well as the list of accepted applicants to AS Executive Director Marisela Marquez, so that she would blind out the names of the applicants, allowing them to be reviewed for possible unjust selection practices. Though this was a potential path to resolution, the email did not lead to action.

Theus, a fourth year and former senator affiliated with the Open People’s party, has applied to be attend SOCC every year and has yet to be a chosen delegate.

“Any immediate solution to this problem must be created here in the legislative branch,” said Attorney General Hector Contreras during his report. He declined to speak further on the issue.