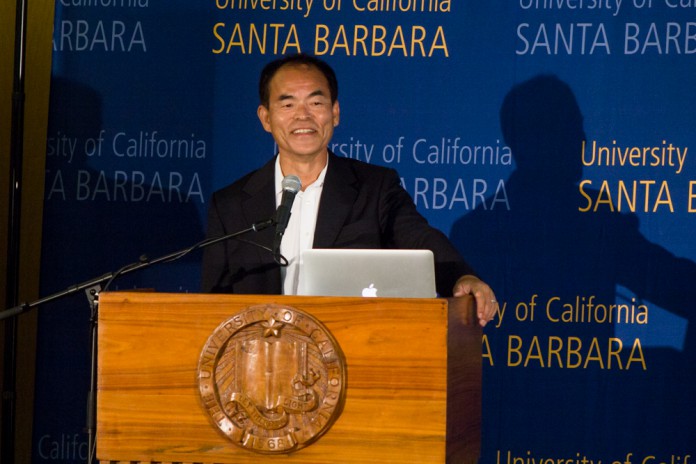 Judy Lau
Staff Writer
Photo by Mathew Burciaga, Layout EditorThe 2014 Nobel Prize in Physics has been awarded to Shuji Nakamura, professor of Materials, Electrical, and Computer Engineering at the University of California, Santa Barbara, along with two others.

Nakamura won the prize for his invention of efficient blue light-emitting diodes, which enables bright and energy-saving white light sources. The prize is shared with Isamu Akasaki of Meijo University and Nagoya University, Japan, and Hiroshi Amano of Nagoya University. Nakamura is the sixth faculty member of UCSB to have won a Nobel Prize since 1998. “This is an incredible honor for Professor Nakamura and the College of Engineering. Dr. Nakamura’s achievements in solid-state lighting continue to have far-reaching impact on lighting and computing technology,” said Rod Alferness, dean of UCSB’s College of Engineering. “We all have his pioneering research to thank for the LED light bulb, monitors, mobile devices, and large flat screen displays that we enjoy today.” Initially, Nakamura was working for the Nichia Corporation, a chemical engineering and manufacturing company and succeeded in inventing the first efficient blue-light laser, opening the way for products such as Blu-Ray players. He was initially doing research regarding red LED lights but later became interested in blue LED lights. Nakamura joined the UCSB faculty in 2000 and was appointed the Cree Chair in the Solid State Lighting and Display Center in 2001. Known for his technological achievements with semiconducting gallium nitrides, he is also considered as a world pioneer in light emitters based on semiconductor gallium nitride (GaN) and its alloys with indium and aluminum. These light emitters demonstrated the world’s first nonpolar blue-violet laser diodes. The development of nitride-based semiconductors by Nakamura represents one of the most important achievements in the materials science of semiconductors in the last 30 years. Specifically, the discovery of p-type doping in Gallium Nitride (GaN) and the development of blue, green, and white LEDs have enabled energy efficient lighting and displays. “There was a lot of red LED lighting and green LED lighting, but without blue lighting, lights could not be created,” said Dr. Nakamura. “With the discovery of blue lighting, the cost and availability of lighting is now much cheaper and much more accessible than it was before. The LEDs contribute to saving the Earth’s resources.” In Africa, millions of diode lamps that normally run on solar power have been handed out to replace polluting kerosene lamps. For the same amount of energy consumption, LED bulbs produce four times the light of a fluorescent bulb and nearly 20 times the light of an incandescent bulb. Additionally, they are more durable and last longer.“The LED bulbs are able to dramatically increase the quality of life for over 1.5 billion people around the world, specifically in third-world countries, who lack access to electricity grid,” said Dr. Siddha Pimputkar, one of the researchers who worked closely with Nakamura. “Because of the low power requirements and the efficiency of the light, it can be powered by cheap local solar power.” The applications and impact of Nakamura’s inventions are not just limited to achieving cheaper solar power. His work has a variety of other impacts in fields ranging from information and communication to healthcare and life sciences to energy and environment. Although the invention of the blue LED is only twenty years old, it has already contributed to creating white light in a completely new way that greatly benefits the world. “What we are seeing here is the beginning of the end of the light bulb,” said Professor Herbert Kroemer, who won the Nobel Prize in 2000. “We are not just talking about doing things better, but about doing things we never could before.”