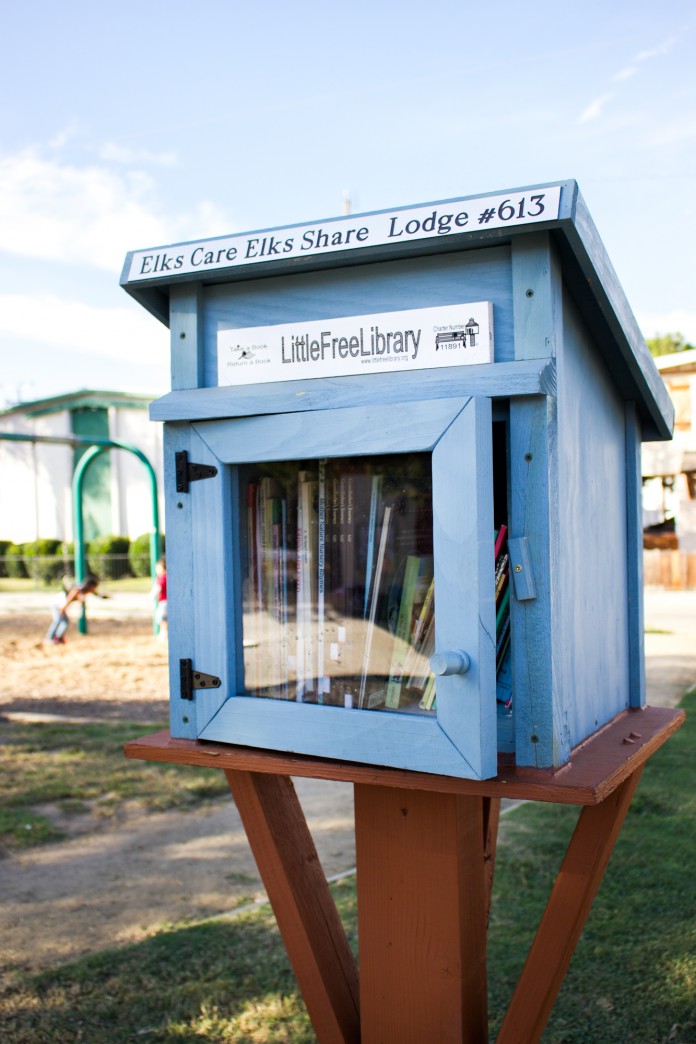 Little Free Libraries come in many sizes, shapes, and colors. These little wooden structures, roughly the size of a dollhouse, have become very popular within recent years.

Little Free Library, the organization responsible for this movement, became a non-profit as of last year. A map on their website, littlefreelibrary.org, shows its distribution across the continents. The Little Free Libraries can be found in all fifty states. Go up north and you will find them in Canada, go down south and you will find them in areas of Mexico, Central and South America. Many of these little libraries have also made their way overseas to some areas in Europe, Africa, Asia, and Oceania.

These library pop-ups are truly a worldwide phenomenon, as there are about 15,000 (a conservative estimate) registered with LFL. This number grew on Sunday, Oct. 19, as one was installed at our local Isla Vista Food Co-operative.

At first glance it looks like a nondescript box, but the Little Free Library organization’s mission is to improve literacy and create a sense of community. People can add their own personal touch as soon as the Little Free Library arrives in the neighborhood. These libraries are filled with books that have been donated by the community, and the structure itself can hold a dozen or more books.

“It’s a great way to get new books that you haven’t read before,” said Itzel Garcia, a floor manager at the Isla Vista Food Co-op and a third-year University of California, Santa Barbara student. “[It] is a great way to share books with other people, not necessarily that you know… you just pick one up and put one back if you want.”

This book trading post is a place to share good reading material. Co-op grocery clerk Naum Milyasvskiy, a fourth-year philosophy and English double major, is thinking about donating good ethics and philosophy books such as the Dalai Lama’s “Ethics for the New Millenium.”

IV Food Co-op General Manager Melissa Cohen said that their community book exchange, located next to the grocery store’s Peace Pole, is one of five Little Free Libraries in IV. Some can be found at St. Marks University Parish and at Isla Vista Youth Projects.

Although Cohen is excited about the co-op’s Little Free Library, there was a time when this library was not going to be a reality. She explained that Little Free Libraries are expensive, costing several hundred dollars, and that the price was preventing the Co-op from ordering one.

One Little Free Library model on the nonprofit’s website, known as “The Essential,” costs about $129  and is one of the cheapest models. Custom models start at 600 dollars. But, according to the Little Free Libraries organization, people can build their own models, which would cost someone roughly $15 to $150, depending on what materials they use. In addition, individuals who build their own are encouraged to make their library official by registering it with Little Free Libraries and getting an official charter sign and number; a standard charter sign is $34.95 and a custom one $74.95. Libraries purchased from their website already come with these amenities.

However, as Cohen was on her way to a Co-op member meeting one day, she received a phone call from LuAnn Miller, executive director of IV Youth Projects, asking her if she wanted to be the host of a Little Free Library, a library that would be coming to IV through a grant from Santa Barbara Elks Lodge #613.

“Obviously I said yes,” Cohen said. And as the saying goes, the rest is history.

Mostly IV Food Co-op members were present at the opening ceremony that occurred before their annual meeting. Cohen also took the opportunity to dedicate this Little Free Library to Arthur Kennedy, a board member and fiscal manager a the IV Youth Projects. Kennedy was once a board member of the IV Food Co-op and is currently a member.

In honor of Kennedy, Cohen also quoted Rabindranath Tagore: “I slept and dreamt that life was joy. I awoke and saw that life was service. I acted and behold, service was joy.”

The library will be both a mental and physical creative space, as Cohen plans on having an artist design the exterior annually.

Service to the community can come in many sizes, shapes, and hues, and in this case, in various jackets, whether it be hardcover or paperback. Cohen said, “Return books, give books, leave notes in them, and pay it forward.”