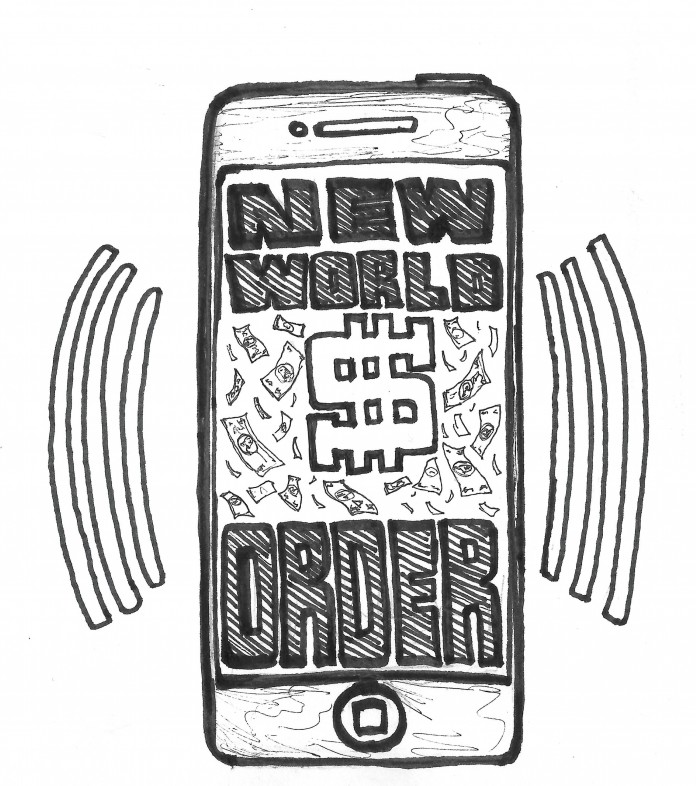 With Apple Pay, Apple believes it can revolutionize mobile payments. The program was first introduced with the iPhone 6, 6 Plus, and the iWatch at Apple’s September Keynote Event, and was finally available for users on Oct. 20 with the iOS 8.1 update.

Users can now add credit and debit cards to the pre-installed Passbook app by either taking a picture of the card, or by manually typing in the card information. Apple Pay allows users to pay by simply placing a finger on the Touch ID sensor–well, at least at the (few) stores with NFC (Near-Field Communication) enabled pin pads. CEO Tim Cook pointed to the various security flaws of credit cards when presenting Apple Pay, such as credit card theft, or simply losing the physical card. He referred to entire system of paying as antiquated.

“The whole process is based on this little piece of plastic,” Cook said, “and whether it’s a credit or debit card, we’re totally reliant on the exposed numbers and the outdated and vulnerable magnetic stripe interface.” He claimed, “Apple Pay will forever change the way all of us buy things.” And perhaps it will. Just not anytime soon. Apple Pay is certainly safer and more convenient than using a credit card. For someone who has suffered through the humiliation of forgetting one’s wallet at home–and only realized it at the register–Apple Pay is a most welcome addition to my phone. Furthermore, Apple Pay has been designed to be the safest payment technique currently available. Cards scanned into Passbook are given a unique Device Account Number assigned by Apple Pay, and the DAN is stored instead of the actual card number. When a transaction is made, the DAN is paired with another one-time dynamic security code generated for the specific transaction and transmitted over NFC to verify a payment, allowing the security code to replace a credit card’s CCV.

The iPhone itself also has a special chip called the Secure Element that is dedicated to security and holds all of a user’s payment information. The data is always kept private and is not uploaded to Apple’s servers. The only problem with Apple Pay is that it’s not being accepted at enough places. Most stores, particularly smaller privately owned stores, do not currently have pin pads equipped with NFC chips that can process payments with contact. Meanwhile, the stores that have the equipment lack the personnel training for a customer to efficiently use Apple Pay; most employees are not yet used to users paying with their phones, which complicates the process. My first–admittedly disappointing–experience with Apple Pay was at the Pardall Subway, where my cashier had to call her supervisor over to assist me with my transaction. The supervisor then had to find someone else to help him activate NFC payments on the pin pad. By the time they had the system set up, I was waiting with my credit card in hand, and a line of waiting customers behind me. If I had to go through the same hassle every time I used a mobile payment system, I never would. Thankfully, the problem is easily fixable with some employee training, as I realized later at Whole Foods. The cashier at Whole Foods was already familiar with Apple Pay, and the pin pad itself had an Apple Pay sticker. The payment process took less a few seconds, and I had to do nothing other than place my finger on my phone’s Touch ID. The phone vibrates when the transaction is complete. It was pretty impressive. Currently, Passbook only accepts credit and debit cards from American Express, Bank of America, Capital One, Citi, and Well’s Fargo. Barclaycard, Navy Federal Credit Union, PNC, USAA, and US Bank are due to add compatibility to their cards later this year.

As far as stores where Apple Pay can be used, the list is rather short. Apple’s website lists 34 chain stores–one of which is Apple itself–but the company is continuing to expand the number of Apple Pay partners.

However, expansion may hit a wall as several stores, including Rite Aid and CVS, are disabling their NFC readers to prevent compatibility with Apple Pay. These two stores are in a partnership to build their own mobile payment app called CurrentC, which is expected to launch next year. They also expect to include other retail giants such as: Wal-Mart, Gap, Old Navy, 7-Eleven, Kohls, Lowes, Dunkin’ Donuts, Sam’s Club, Sears, Kmart, Bed, Bath & Beyond, Banana Republic, Stop & Shop, and Wendy’s.

CurrentC would allow the aforementioned stores to cut out the need for credit cards and processing fees. Unlike Apple Pay, CurrentC will not attempt to replace credit cards–rather, it will directly withdraw money from the customer’s checking account. Naturally, banks and credit card companies aren’t too happy about the prospect, and not one will currently back CurrentC, though most have voiced support for Apple Pay. We’ll find out next year which mobile payment programs works best, and both retailers and banks will be forced to back whichever program the customers choose.