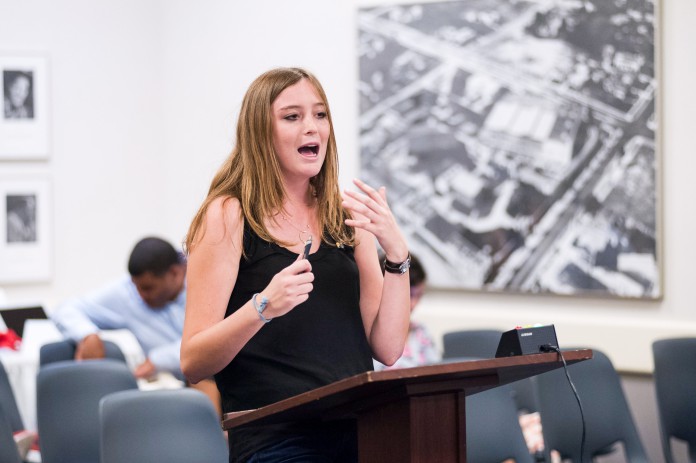 Former Student Advocate General Bailey Loverin spoke about a bill to update Associated Students Legal Code Article VII Sections 3, 8-10 at the Oct. 22 meeting of the AS Senate at the University of California, Santa Barbara.

The bill proposes that appointed staff members in executive offices should be protected from removal without cause as determined by Senate and passed by a vote of fifty percent plus one.

“This new rule applies only for the first 20 weeks of an executive’s term so as to prevent the arbitrary removal of staff but not impede upon the efficiency of the office,” said Loverin during Public Forum. “Replacing an entire executive office three months into the school year and shortening the term to six months is highly detrimental and, to be blunt, completely foolish. We also should not ignore the rights of appointees who have upheld their commitments and who went through a highly selective application process to get the position that they did.”

Several staff members from the Office of the Student Advocate were also in attendance at Public Forum.

“The office has already been behind on its duties, and [the current] OSA staff has already been trained and fully-functioning,” said OSA Casework Chief of Staff Saiba Singh. “Our staff has been working overtime and doing things that are not in our job description in order to uphold the duties that our office is proud of…we would feel that if our jobs are arbitrarily dismissed it would be unfair and unwise.”

Off-campus senator Erika Martinez read a statement by Mathew Burciaga, county director for the Office of the External Vice President of Local Affairs, regarding his opinion of the bill and the security of the staff positions in the office of the EVPLA.

“Our dedication to the office, especially in the absence of our executive, displays that we are willing to do the work regardless of the circumstances,” said Burciaga. “We simply ask that senate allow us to continue to do our jobs. We have not been remiss in our duties, and as such, we feel that dismissing us in this fashion will be doing us, the association, and the larger student body a massive disservice.”

AS President Ali Guthy spoke in opposition to the bill during her Executive Officer report.

“From my understanding, the Executive Officer, as an elected official from the entire student body, has a responsibility and also a privilege of choosing who works for them,” said Guthy. “I can imagine if there is any bad blood between a currently existing officer staff member and a new executive, if it hinders your work with the office, it is their right as an elected official, as elected by an inherent student body, to select who they will be working with…so to deny them that right I think is just innately against the whole principle of what an executive officer does.”

Later, Attorney General Hector Contreras addressed Senate during his report, stating that the Senate should be aware of whether they are overstepping their boundaries and limiting the power of Executive Officers to hire their own staffs, when voting on the bill.

Senate voted to send the bill to University Affairs and Constitution and Bylaws Committee. It will be reviewed and voted upon at the next meeting of the AS Senate on Wednesday, Oct. 29.