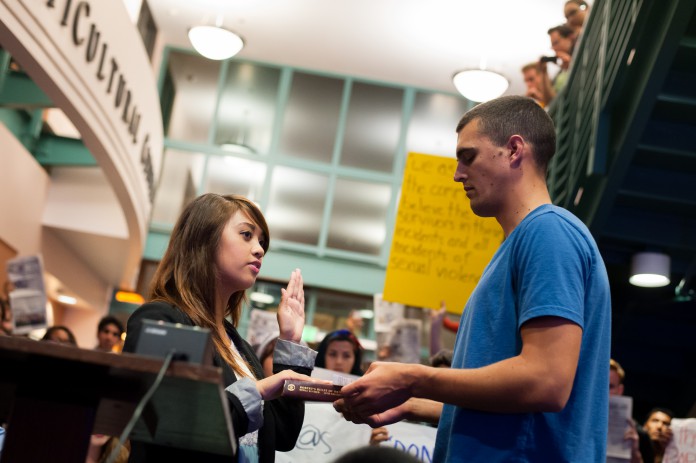 Beatrice Contreras publicly released a written statement of resignation from her position as the External Vice President of Local Affairs for the Associated Students of the University of California, Santa Barbara, on Wednesday, Sept. 17.

“This has been a difficult decision due to the consistent support of many individuals,” Contreras said in her statement. “This decision is not a reflection on the other Executive Officers, Senators or members of the EVPLA Office, and should not be viewed as such. I still have full confidence in the qualification and goals of all elected officials and the EVPLA Office.”

Contreras made public her resignation through the distribution of a press release, which she sent to Associated Students Executive Director Marisela Marquez. The press release was then emailed to the listservs for Associated Students staff, Executive Officers and the AS Senate, as well as the boards, committees, and units (BCUs). Contreras also released her statement via a public Facebook post.

In her statement, Contreras does not mention the reasoning behind her decision to resign,  and when approached by The Bottom Line she declined to comment.

In two statements published via blog post on April 23 and 26, Crystal Long, a current third-year global studies major, accused Contreras of sexually assaulting her during fall 2013. Long had been working in the AS Office of the President as Commissioner of Diversity and Equity while Contreras was serving as an off-campus representative on the AS senate when the incident allegedly occurred. Contreras published responses to these allegations with a post to her own blog, which was later removed, as well as a public Facebook post on April 24, in which she stated that the allegations made against her were “patently false.”

The Open People’s Party rescinded Contreras’ membership on May 16. Several students, including AS member Monte-Angel Richardson, began circulating a petition for a recall election. However, due to the number of signatures required, the petition was not successful.

“With the accusations made against her, many people felt uncomfortable in the AS spaces she occupied, and it made coordination with her office difficult,” said Richardson. “The recall petition has been gathering signatures throughout the summer. I’m not a student anymore, so I have not been leading in those efforts, but I believe it would have gained enough to be enacted during fall quarter.”

Long, as an involved party in the controversy, commented on Contreras’ resignation.

“I honestly didn’t even think she would resign because assailants so rarely face enough social repercussions for their actions for it to affect their lives in any significant way,” Long said. “To be honest, I feel really indifferent to her resignation. Yes, she has created an unbelievable amount of trauma in my life, but she is not the only sexual assailant or rape apologist in a position of power. It’s not that she shouldn’t face consequences for her actions — it’s that she shouldn’t be the only one facing consequences like this. It seems that she is being the most demonized as an assailant because of her marginalized identity. And it doesn’t feel right to celebrate a victory caused by the same reasons that made me a target for sexual assault.”

Recently, sexual assault  has become a widely discussed issue on the UCSB campus. As of Sept. 10, six current or former UCSB students have filed federal complaints with the U.S. Department of Education’s Office of Civil Rights, claiming that the university violated Clery Act and Title IX requirements. Title IX prohibits discrimination on the basis of sex in education, including but not limited to, sexual violence and gender-based discrimination. The Clery Act mandates that both public and private universities, which receive federal funds, must report campus safety information and adhere to basic requirements when handling cases of sexual violence and assault. UCSB is among many universities in the U.S. that is under investigation due to Title IX complaints such as this, which are filed by victims of sexual assault who do not feel that their rights are being upheld by their campus administration.

As a response to sexual assault cases within the UC system, the University of California Student Association (UCSA) has adopted the UConsent campaign to support victims and survivors of sexual violence and assault on every UC campus. UCSA has stated that the goal of this campaign is to “promote a culture of consent through awareness, education, and advocacy,” according to the website, 7000insolidarity.org/uconsent. This campaign has gained support from several advocates on UC campuses, including the Associated Students of the University of California. AS External Vice President of Statewide Affairs Melvin Singh noted that AS is looking into implementing the UConsent campaign on the UCSB campus as it develops further.

Corrections: The title of this article has been changed to reflect that Beatrice Contreras held the title of EVPLA, not EVPLA-elect, at the time of her resignation. Also an earlier edition of this article stated that Melvin Singh was the AS External Vice President of Student Affairs, which is incorrect. Melvin Singh is the AS External Vice President of Statewide Affairs. Furthermore, an earlier edition stated that the acronym for boards, committees and commissions was BCU. This acronym refers to their new designation as boards, committees, and units.