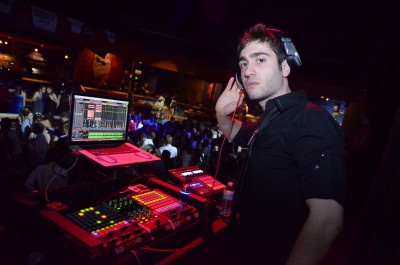 The Welcome Back concert has long been a special treat for new students here at University of California, Santa Barbara, ringing in the new school year with an extravagant concert held under Storke Tower on the first weekend of the year. For the 2014 iteration, which will take place on Oct. 4 at 9:00pm, Welcome Back’s headliner will be electro-house DJ and preeminent mash-up artist 3LAU.

Justin David Blau, who stylizes his stage name as 3LAU, made his debut in 2011 with “Dance Floor Filth.” Taking a page from genre progenitor and mash-up legend Girl Talk, 3LAU’s most notable work involves cutting together some of the most popular pop, hip-hop, and EDM songs to create a fast-paced, crowd-pleasing musical style that can keep audiences dancing for hours. For example, his first album produced two popular singles: “All Night Long,” which features samples from Felguk’s original “All Night Long,” Ellie Goulding’s “Lights,” and LMFAO’s “Party Rock Anthem”; and “Girls Who Save the World,” whose roster of heroines includes the likes of Adele, Britney Spears, Dragonette, and Nadia Ali, framed by a healthy dose of Alesso and Swedish House Mafia samples. It’s ADD music making at its finest, and tracks like these ensure you’ll be singing along until the very end.

“Dance Floor Filth” spawned two numbered sequels, with these albums serving as his major tent poles. Other 3LAU work includes collaborations with artists such as Tiësto, Bright Lights, Zedd, and fellow mash-up contemporary Kap Slap. Expect to hear remixes of fan favorites like Zedd’s “Spectrum” and Tiësto’s “Red Lights,” some stellar original songs such as “How You Love Me,” and selects from his main collection of albums, with a good amount of tracks likely coming from the most recent “Dance Floor Filth 3,” released at the end of last year. The third installment features the most current radio hits, with Ellie Goulding’s “Burn,” Capital Cities’ “Safe and Sound,” and an unexpected utilization of Miley Cyrus’s “Wrecking Ball” all appearing alongside Martin Garrix, Deorro, Krewella, Kyle Minogue, and dozens of other artists.

And while discussing 3LAU’s music can devolve into just naming off the great songs he has co-opted for his own use, his superior production talents and ear for hearing what samples will work well together set him apart from the crowd. He doesn’t just throw a bunch of pop hits in the kitchen sink to see what works; it’s a delicate process, and knowing what will fit where and produce the most excitement and energy is a skill that takes years to develop. 3LAU has solidified himself as one of the frontrunners of this style.

Welcome Back is a concert meant to bring the new student body together through one of the great universal languages: music. 3LAU fits this bill perfectly, as his mash-ups incorporate a wide range of musical tastes, and you’re sure to make a friend or two screaming a mutual favorite song at the top of your lungs as you let loose in a way only EDM can really provide. Every new track inspires excitement, as you never know which songs might pop up in the middle of the performance and drive you wild. Even if EDM shows aren’t your thing, this isn’t your typical dance concert. If you do attend 3LAU’s exclusive UCSB show, expect to go crazier than you think you will.