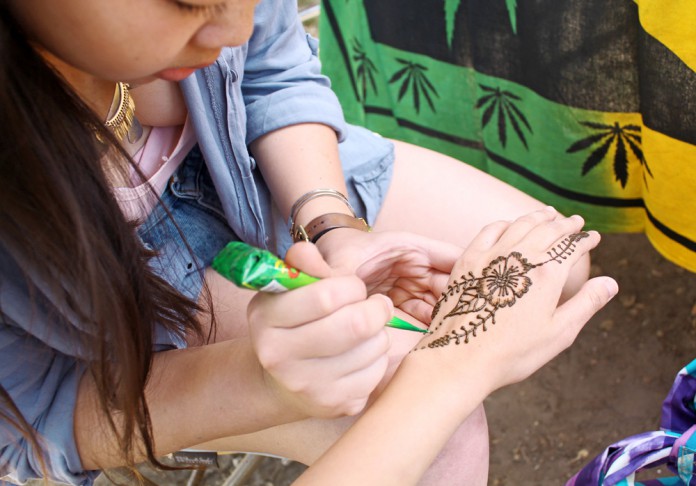 Campus and community organizations, such as Active Minds, the AS Food Bank, the Environmental Affairs Board, and Isla Vista Youth Project, hosted activities and distributed stickers to participants. Participants then used the stickers to score the coveted Chilla Vista tank tops, which could then be tie-dyed for another sticker fee. Similarly, five stickers could buy participants food provided by the Isla Vista Co-op.

Off to the side of the event, local artists displayed their work, much of which embodied California beach town vibes. In fact, one artist chose to paint on skateboard decks in place of traditional canvases.

The event, which was scheduled to begin at around 1 p.m., began roughly 40 minutes late with local all-girl band That’s What She Said. The late start allowed time for a sizeable crowd to gather, and the crowd did not disperse until the end of the event.

Next, Alright Alright, featuring Professor Tamsin Cleo German on bass, took the stage. The audience was filled with students eager to see their favorite professor in action.

“I took developmental psychology with her last quarter,” said Devon McNaughton, UCSB third-year and That’s What She Said’s bassist. “She also teaches psychology of the supernatural. She’s super cool.”

The Olés followed Alright Alright. The band, clearly well known among the concertgoers, performed a combination of originals and covers. The crowd greeted The Olés’ original tunes with enthusiasm. The band celebrated their beloved, student-infested beach town with original songs like “IV League” and “Goin’ Back to Cali.” Toward the end of the band’s set, people gathered in front of the stage to dance.

The Fire Department, another well-known local band that frequents the IV party circuit, took the stage next and delivered a flawless performance. The band promoted their most recent EP, “Underwater,” and encouraged the audience to attend their show at SOhO on Friday, May 9.

As the event was winding down, FMLYBND finally hit the stage. Frontman Mac Montgomery kept the audience alive by insisting everyone stand up and gather in front of the stage. The band began its career playing the Isla Vista party circuit but has recently worked its way into the big leagues, reaching more than 7,500 likes on Facebook and almost 400,000 plays on Soundcloud for their single “Electricity.” FMLYBND followed up “Electricity” with “Come Alive,” leaving the audience wanting more.

Brandon Pineira, AS Program Board’s Special Events Assistant and UCSB third-year communication and psychology double major, explained that AS Program Board provided the security for the event.

“My job was to coordinate everything on the music side of the event,” he continued. “I pitched artists to IVCRC, who then selected the lineup from my pool of suggestions.”

Overall–from the music to the booths to the weather–the event was pulled off flawlessly.