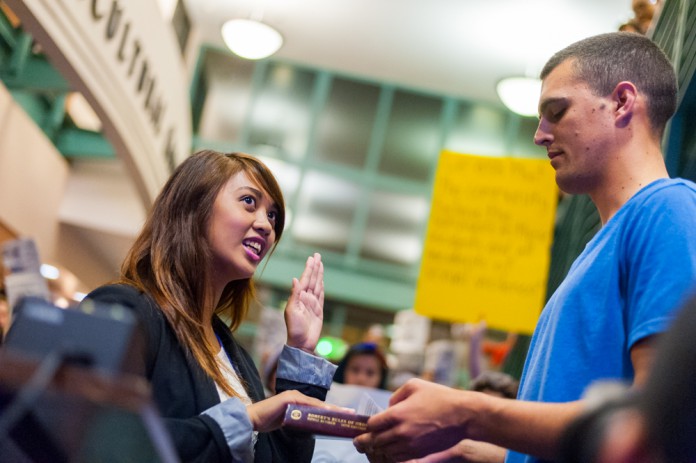 The Open People’s Party (OPP) announced its decision to rescind the party membership and request the resignation of External Vice President of Local Affairs (EVPLA)-elect Beatrice Contreras on Friday, May 16, in response to allegations of sexual assault made against her.

The statement posted on the OPP Facebook page Friday claimed the party “cannot comment on [Contreras’] guilt or innocence,” but that this decision would be best for the party, the student body of the University of California, Santa Barbara, and the Associated Students of UCSB.

The decision was reached in response to blog entries posted in April by second-year global studies major Crystal Long on a page entitled “Coalition for Survivors.” In an April 23 post, Long accused Contreras of sexually assaulting her during UCSB’s fall quarter, even addressing Contreras more directly in a follow-up post on April 26.

Contreras responded with her own blog post, which she later removed.

“At first it started out with just getting her out of power, because I didn’t trust her to be around other younger, more easily influenced women who were joining [groups with Contreras] and trusting her,” Long said. “But the way that it’s gone… it doesn’t really matter who believes me or not now, because it’s more about what people are going to do about it.”

At the time the incident occurred, Long was working as Commissioner of Diversity and Equity in the office of the AS President, while Contreras served as an off-campus senator on the AS Senate. Both Contreras and Long describe their relationship prior to the incident as close, but Long feels that Contreras always held more power over her as a mentor figure.

This power has political roots and is encouraged by the way OPP operates as a party, according to Long. She describes OPP members as “straight politicians,” based on her experience working with them in the past.

“The way that they’ve handled this… they’re trying to save their own reputation. It’s all about résumé builders,” she said. “And I know how much they’ve covered up in the past, before even my assault.”

Long has chosen not to move forward with a police report or official investigation, in part because she felt that the process of filing a report would be too emotionally triggering, and also out of consideration of the long-term ramifications for Contreras.

“I shouldn’t show mercy, but I still cared, even though I shouldn’t, about what people would see if they search her online,” Long said.

This lack of investigation is a source of frustration for Contreras, who denies that an assault occurred.

“I’m frustrated that few people have approached me about this directly, instead jumping to conclusions,” she said in an email. “[Long] refuses to bring any case against me and I am now being punished without the opportunity to defend myself.”

While Contreras confirmed that she and Long were physically involved, she says that this was a mutually desired relationship. Likewise, she claims the incident in question involved permission from both women.

“We were both equally intoxicated and consenting adults, and shouldn’t be held responsible for each other’s actions,” Contreras said in an email.

Contreras believes Long’s allegations to be politically motivated, due to references in her blog post to OPP as well as an alleged statement that she wants Contreras removed so that she can become involved in AS once more. Though Contreras says that OPP’s statement came as a “huge surprise,” she does not plan to fulfill the party’s request for her resignation.

“OPP can remove me from the party, but I don’t need to be a member of the party to serve this school,” she said in an email. “I look forward to my coming term as an independent executive.”

OPP Party Chair Derek Wakefield said that while the decision about Contreras was not an easy one, it was a decision the party felt ultimately had to be made.

“It’s tough, especially on everybody in the party as well. She was somebody who we all became really close to,” Wakefield said. “But at the same time, when there are these allegations, you can’t ignore them.”

Wakefield, who has been involved in several groups working to end rape culture on campus, said that statistically only two percent of sexual assault cases are found to be false. Though he did not initially support the idea of taking a stance against Contreras, he now feels that it had to be done.

“I know I certainly made comments [previously] that don’t reflect this final decision, and that really is my onus to bear,” Wakefield said. “I personally am really ashamed at some of the things I said, and I also believe that this statement is the right decision for the party.”

A petition currently in circulation for a recall election would require 10 percent of students who voted for the EVPLA position to sign in order for an election to be initiated. According to AS Attorney General Sawyeh Maghsoodloo, once these signatures are collected, another election would be held in which 20 percent of the school must participate and a two-thirds vote must be accumulated in favor of recalling Contreras.

Maghsoodloo believes that OPP likely asked Contreras to resign in order to avoid the tense climate the recall process would likely foster within the association.

“Regardless of guilt or innocence,” said Maghsoodloo in an email, “this process would be unhealthy for the association, for the Open People’s Party, and for [Contreras].”