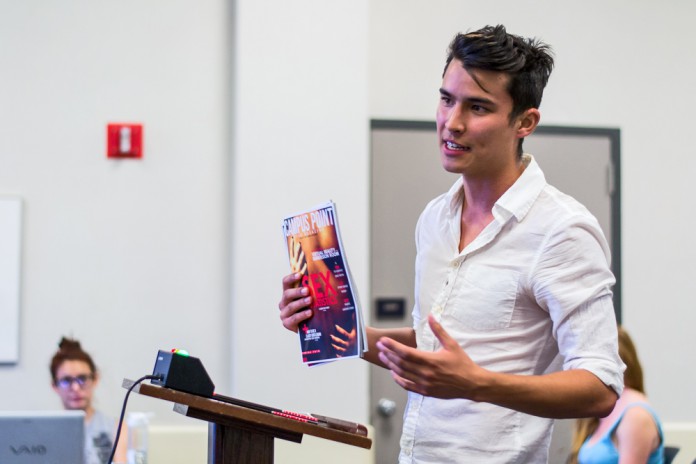 Associated Students Senate passed a resolution in support of more socially responsible investment by the University of California and tabled the proposed 2014-2015 AS budget at its meeting on Wednesday, April 30.

Second-year biopsychology major Guy Singer spoke in favor of “A Resolution to Create Socially Responsible Investment Systems at the University of California” during that evening’s public forum.

“We could be one of the first campuses in the world to create this system and actually implement it,” Singer said.

The resolution mandates the creation of an ad hoc committee devoted to developing a set of Environmental, Social and Corporate Governance (ESG) standards for use by the UC system to ensure socially responsible investment by the UC Treasury, UC Regents, and the UCSB foundation. This rating system will utilize a composite of factors, such as human rights or environmental concerns, to determine which companies are considered socially responsible by the UC.

Once the ad hoc committee has compiled a list of socially responsible investments, a four- to five-year plan for reallocating current investments will be presented to the Regents. The resolution was written with the hope of garnering support for this plan from other UC campuses as well.

“I really think this is a great movement, something we could start that would snowball from us to the UC to universities all over the world [that is] really encouraging business as usual to change to business for the better,” said Collegiate Sen. Scott O’Halloran, one of the authors of the resolution.

A key consideration in the drafting of this resolution was the ongoing campus debate over divestment from companies that contribute to Israeli occupation of Palestine. Singer said that representatives of both sides of the argument had a role in writing the resolution’s terms.

The Senate voted unanimously to pass the resolution.

Senatorial discussion of the proposed 2014-2015 AS budget, which in total amounts to around $10.7 million, centered around a decision by AS president Jonathan Abboud to reallocate $40,000 from staff salaries to student group funding. The money had previously been designated as compensation for certain full-time staff positions that are currently unfilled.

Abboud recommended that instead of focusing on taking on more full-time staff, AS should consider redistributing responsibilities among its current staff members.

“We don’t always have to be doing more and more and more,” Abboud said. “Maybe we can just do better with what we have.”

Abboud also suggested that student employees could take on some of the administrative responsibilities formerly assigned to full-time staff members.

AS Associate Director of Community Affairs Aaron Jones conveyed concerns that the current AS staff is overburdened with the added responsibilities brought on by the reduced staff.

“They all feel that they are doing more than is in their job description,” Jones said. “I’ve asked them to do more because of the shortages that we have in staff. They do put in hours that aren’t necessarily accounted for.”

The Senate later voted to table the budget, which will be decided on at its May 7 meeting.